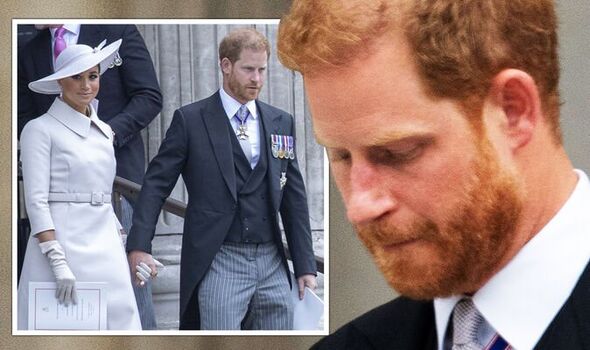 The Duke of Sussex and his wife Meghan and their children, Archie, three, and Lilibet, one, were spotted leaving an airport in Santa Barbara.

A private jet which brought them across the Atlantic last week, left Farnborough Airport in Hampshire at 1.30pm on Sunday, just over an hour before the grand finale of the Queen’s celebrations, the Jubilee Pageant, began in central London.

It is not clear who paid for the estimated £160,000 cost of the executive jet, which sat at Farnborough from when the Sussexes arrived there last Wednesday until their departure.

The Queen sent a security car to meet the family, who have been based in California since shortly after Harry and Meghan quit their official royal roles in March 2020. It is thought they had police back-up when they left.

There was little sign in public at least of fractured relationships inside the Royal Family being repaired during their visit.

Harry, 37, and Meghan,40, kept a low profile, watching Trooping the Colour with other members of the family from the Duke of Wellington’s former office and attending a national memorial service at St Paul’s Cathedral for the Queen’s reign.

But there was no sign that they had mended fences with the Duke and Duchess of Cambridge, who were in Wales with Prince George and Princess Charlotte on Saturday when the Sussexes are understood to have held a first birthday party for Lilibet.

Harry and Meghan, who were booed by some in the crowd outside St Paul’s, are understood to have met Charles and Camilla at Clarence House before the service on Friday.

They were spotted driving out of the heir to the throne’s official London residence.

They remain on good terms with some of Harry’s cousins, including Princess Eugenie, Peter Phillips and Zara Tindall.

Peter and Zara’s children are reported to have attended Lilibet’s birthday party at Frogmore Cottage on Saturday. The Queen is understood to have met her great-granddaughter for the first time last Thursday.

William and Kate, meanwhile, gave a starring role to their children in the Platinum Jubilee celebrations and in a personal message on social media channels yesterday they said their youngest child, Prince Louis, four, had especially enjoyed them.

Louis endeared himself to millions with his antics. He was seen letting out a howl and clapping his hands over his ears on the Buckingham Palace balcony on Thursday during the RAF flypast as his “Gan Gan” the Queen sweetly told him what was happening.

Louis was also spotted being bounced on the knee of his grandfather, Prince Charles, during the pageant on Sunday and giving his mother Kate a kiss on the cheek and a cuddle as well as blowing her a raspberry.

In their message on Twitter, they said: “What a fantastic weekend of celebrations.

“Seeing people across the nation coming together with family, friends and loved ones has been extremely special.

“Thank you to everyone who turned out to show their gratitude to The Queen and her inspiring 70 years of leadership.

“From the crowds on The Mall to communities hosting street parties up and down the country, we hope you had a weekend to remember.

“We all had an incredible time, especially Louis…”