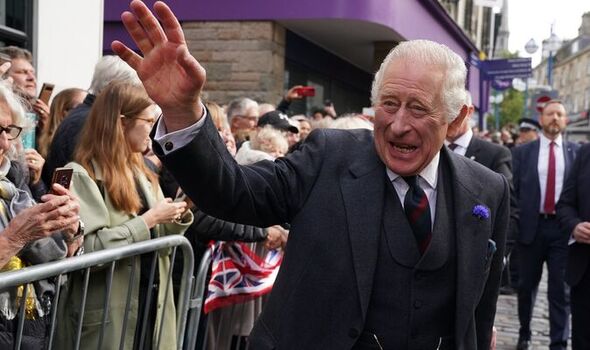 Thousands turned out to greet the new monarch as he conferred city status on Dunfermline as part of Her Majesty’s Platinum Jubilee celebrations. And the beaming King thrilled them by revealing the Fife town’s promotion would “gladden my dear mother’s heart, as it certainly gladdens mine”.

Charles, in a kilt of Old Stewart tartan which dates from 1819, and Camilla, in a co-ordinating coat, smiled, waved, shook hands and chatted with the crowds.

As a pipe band played there were loud cheers and cries of “God save the King”.

Their host, Scottish First Minister Nicola Sturgeon, was also cheered – but booed too.

The King, 73, said he hoped Dunfermline would feel a “real sense of pride”.

He added: “There could be no more fitting way to mark my beloved mother’s extraordinary life of service than by granting this honour to a place made famous by its own long and distinguished history.”

The Royals also visited Dunfermline Abbey, the burial place of Robert the Bruce, to mark its 950th anniversary.

And last night the King and the Queen, 75, hosted a reception at the Palace of Holyroodhouse in Edinburgh to celebrate British South Asian communities.

It was a busy day for Charles – he also held his first investiture ceremony as King.