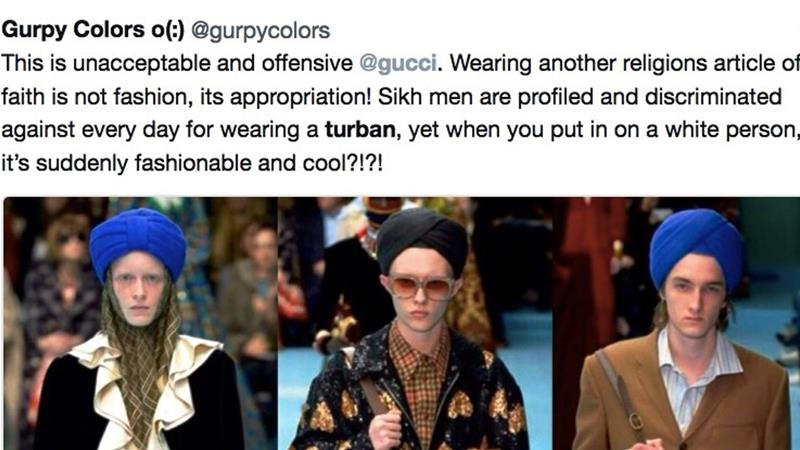 Sikh commentators and organisations have criticised Gucci for using turbans in a recent runway show, saying the fashion brand has culturally appropriated their religious headpiece.

A host of models wore turbans in Gucci’s show on Wednesday as part of Milan fashion week.

By Friday, thousands had shared messages of anger and disappointment that the brand had used the Sikh religious symbol for profit.

Many of the world’s 27 million Sikhs – both men and women – wear the turban.

It covers the knot of hair which followers of Sikhism allow to grow naturally out of respect for God’s creation.

Most Sikhs live in India.

The models who wore the Gucci turban were mostly of European origin.

The New York-based Sikh Coalition civil rights group tweeted on Friday: “The Sikh turban is a sacred article of faith, @gucci, not a mere fashion accessory. #appropriation. We are available for further education and consultation if you are looking for observant Sikh models.”

In a tweet shared by 1,500 people, India-based restauranteur Harjinder Singh Kukreja said: “Dear @gucci, the Sikh Turban is not a hot new accessory for white models but an article of faith for practising Sikhs. Your models have used Turbans as ‘hats’ whereas practising Sikhs tie them neatly fold-by-fold. Using fake Sikhs/Turbans is worse than selling fake Gucci products.”

Diaspora Sikhs in the West were particularly targeted in the post 9/11 era, when followers of the faith were frequently mistaken for Muslims, and attacked.

Tina Daheley, a British broadcaster born to a Sikh family, was among those who shared the story of a racist attack in Britain, which took place on Wednesday.

An Indian Sikh man had been waiting at parliament in London to meet Tanmanjeet Singh Dhesi, a Labour Party MP, when an attacker attempted to rip off his headpiece and said “Muslim go back home”.

“While Gucci sends white models down the catwalk wearing turbans, a Sikh environmentalist has his turban ripped off outside parliament in a hate attack. As someone whose family has been on the receiving end of this sh** for decades, this is utterly depressing,” said Daheley.

User @kingkang3211 said: “Wearing a turban as a Sikh makes me smile, privileged & truly honoured. People across the globe battle issues & get bullied because of it. @gucci used the beautiful turban as a fashion accessory, the question remains why a Sikh man couldn’t model for them? We have so many Singhs.”

@gurpycolors tweeted: “Appropriation! Sikh men are profiled and discriminated against every day for wearing a turban, yet when you put in on a white person, it’s suddenly fashionable and cool?!?!”

Earlier in February, high-street retailer Zara was mocked online for selling a checkered skirt that had a striking resemblance to a lungi, a loose garment worn by men in South Asia.