The Death Gun Salute was fired at 1pm in London, in all corners of the UK and at saluting stations abroad. The King’s Troop Royal Horse Artillery used 71 equines to pull six First World War-era 13-pounder Field Guns to Hyde Park, while the Honourable Artillery Company performed the ear-splitting salute at the Tower of London. Shots also rang out from Cardiff Castle, Edinburgh Castle, Hillsborough Castle, York, Portsmouth and Gibraltar.

One round was fired every 10 seconds, with the full 96 rounds representing one for every year of the Queen’s glorious and unblemished life. Gun salutes – traditionally fired on land and at sea as a sign of respect or welcome – took place to mark the passing of Queen Victoria in 1901, Winston Churchill in 1965 and the Queen’s beloved husband, Philip, last year.

A period of official mourning is now being observed by members of the Royal Family, household staff and representatives and troops on ceremonial duties until seven days after the Queen’s funeral, which is expected to be held on September 19.

But in a uniquely British way, hundreds of thousands of her loyal subjects overcome with shock and grief besieged the Queen’s palaces, including her Buckingham Palace home, official residence at Windsor Castle and Balmoral Castle in Aberdeenshire, Scotland, where she died on Thursday. At each, tens of thousands of floral tributes and lovingly hand-written cards were placed outside.

There was also a scramble for 2,000 tickets issued on a first-come-first-served basis for Friday night’s

Meanwhile, church bells around the country rang for an hour to pay tribute to Her Majesty The Queen.

The Church of England sent out guidance to parish churches, chapels and cathedrals around the country encouraging them to toll their bells and open for prayer following the announcement from Buckingham palace.

A number of historical landmarks, including Westminster Abbey, St Paul’s Cathedral in London and Windsor Castle, rang their bells at midday – specifically with muffles in order to create a more solemn sound. 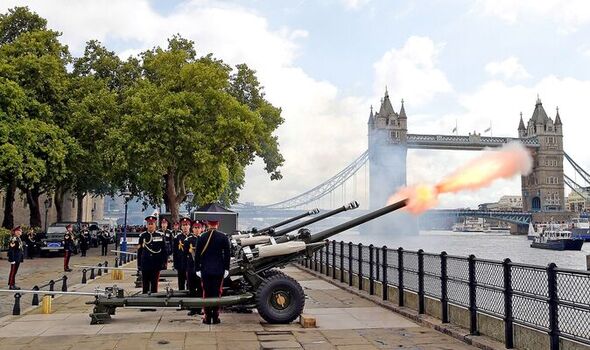 Glasgow, Leeds and Manchester Cathedrals were among those paying their respects by sounding their bells, as well as Crathie Kirk, near the Balmoral estate in Scotland and St Cuthbert Church, at the foot of Edinburgh Castle.

Most of the country’s 16,000 churches have not rung bells muffled since the death of the Monarch’s father in 1952. A plan, named ‘Operation Muffle’, saw leatherworkers inundated with orders as churches rush to ensure they were ready for the sad day, as many found their leather mufflers had rotten in recent years, or gone missing.

Meanwhile, parliamentary business has all but been postponed as the nation focuses its full attention on the build-up to the Queen’s state funeral. That is likely to be a public holiday in the form of a day of national mourning.

Many were open to allow those still processing the seismic news which broke on Thursday to process their sorrow.

This weekend tens of thousands of events have been cancelled as a mark of respect, including this weekend’s Premier League football fixture programme, while books of condolence have been opened across all four home nations.

The official royal website opened an online condolence message form, encouraging mourners and well wishers to leave their thoughts. It said a selection would be passed to members of the Royal Family, and may be held in the Royal Archives for posterity.

Books of condolence were opened by hundreds of councils and The Church of England website, which also encouraged people to light a virtual candle for the Queen.

On the high street business – large and small – also showed their respects by shutting for the day. Retailers Liberty, French Connection and Selfridges were among those to close their stores on Friday.

Selfridges said: “It is with deep sorrow that we acknowledge the passing of Her Majesty, Queen Elizabeth II. Queen Elizabeth has been a reassuring constant throughout our lives, ascending to the throne on February 6, 1952, making her the longest-reigning monarch in British history. Over the past 70 years, her Majesty has been dedicated to the service of our country and the Commonwealth, demonstrating an enormous sense of duty and commitment.”

Marks and Spencer remained open, but in a statement said of the Queen: “She led at all times with a quiet determination and selfless devotion, and has been all that is the very best in us. While being monarch she has raised a loving family whom she adored, and they her. As Prince Philip the Duke of Edinburgh was to her, she has been our nation’s strength and stay.”

Harrods, the royal department store, said it would shut on the day of the state funeral. 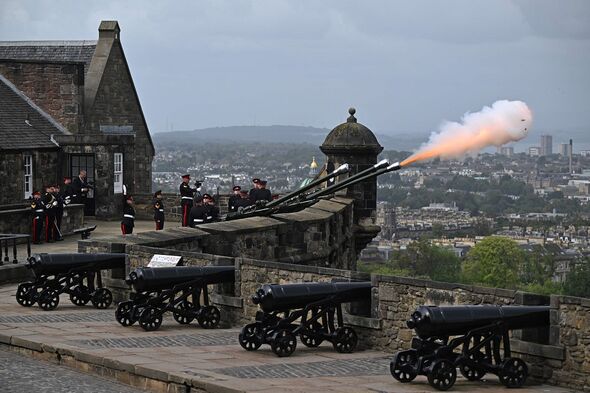 The Met Office said it would only supply daily – and not future – forecasts for the duration of the official mourning period.

Some welcomed the pause on public life but others were left bemused at the postponement of sport and community events.

Alistair Harrison said: “Cancelling football? Other events? We’ve had lockdowns. Let people mourn how they choose. Did you see the West Ham fans [at their Europa Conference League match against Romanian side FCSB on Thursday night] singing the national anthem? That’s far more powerful than closures.”

Family GP Liam Barker added: “I’m trying to figure out why I am mourning. The Queen’s death feels similar to losing a grandparent.”