The official Royal Family Twitter page posted a reminder to fans that it is an astonishing 70 days since the “central weekend” of the royal festivities. In the video, the Firm’s social media account mentions seven possible highlights of the royal jamboree.

They included Trooping the Colour, the lighting of the Jubilee beacon, the service of thanksgiving, the party at the palace, Prince Charles’ tribute to the Queen, the “colours and sounds” of the Platinum Pageant and the Royal Family’s final “balcony appearance” at Buckingham Palace.

The video finished by asking viewers to share their own favourite memories of the festivities.

The call sparked a lively debate among royal fans.

Her Majesty’s friendly and informal conversation with Paddington Bear was a popular choice with many fans. 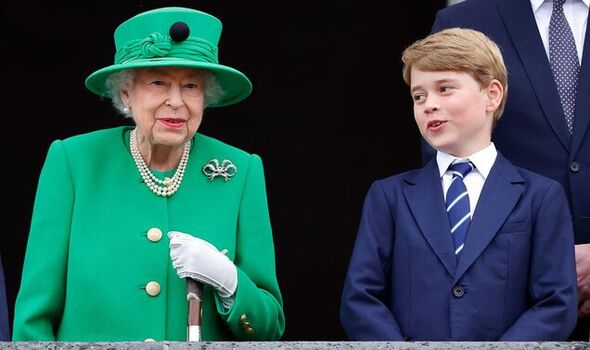 @wendywenwitch wrote: “The wonderful video of Her Majesty taking tea with Paddington Bear, and showing him her Marmalade sandwiches in her handbag.

“It was just beautiful, and will stay in my heart forever.

“God Bless The Queen. And God bless Paddington Bear, too.”

@gundigandhi chimed in by adding: “I would have liked to have been there, unfortunately too far away.

“I had seen a lot on TV and followed it on the internet.

“Then the great video with the Paddington bear turned out great.”

@darleschickens_ wrote: “I enjoyed the Queen having tea with Paddington Bear.”

Prince Louis’ boisterous but often hilarious behaviour, including when he covered his ears during a flypast over Buckingham Palace, also left fans ecstatic.

@american_rf_fan added: “Her Majesty on the balcony and little Louis’ many impish faces.”

Other fans felt the final balcony appearance was the highlight for them.

@katieschneide20 said: “Traveling from Texas to celebrate Her Majesty and her 70 incredible years of service!

“Seeing the 2 balcony appearances of the Queen up close was absolutely my favourite.

“She is a treasure to our world!”

@loveflowers33 added: “It was such an amazing weekend.

“Her Majesty with Paddington Bear was fantastic, but my favourite is probably when she came out onto the balcony at the end of the weekend.”