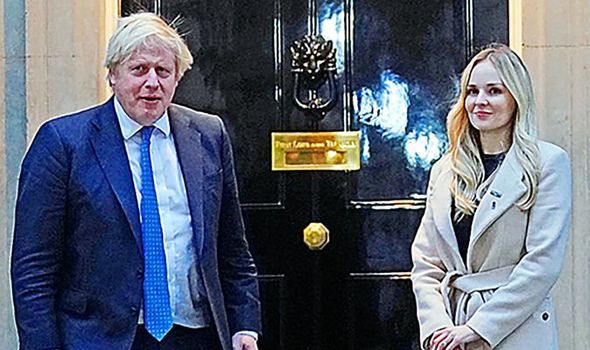 Lissie Harper and the police officer’s relatives were prompted to campaign for the law after the 28-year-old officer was killed while responding to a call about a stolen quad bike on August 15, 2019. The Government has said it will introduce “Harper’s Law” as soon as possible, while Lissie has been praised by Prime Minister Boris Johnson and Justice Secretary Dominic Raab during a series of meetings in Westminster.

After meeting Mr Johnson yesterday afternoon, she said: “It started with a sense of a feeling of injustice, a feeling of anger, and this isn’t right and something needs to change.

“Throughout this process I’ve received an immense amount of support from the public and those close to me, but also from strangers.

“To reach this point with Harper’s Law, I’m really proud of all the work that we’ve done. I think it sends a message to those who lead those sorts of lives ‑ who commit crimes, who have no remorse for taking innocent people’s lives away ‑ and it will tell them that we won’t stand for this.”

Mr Raab also praised the widow for her crusade. He assured Lissie that she had the support of Parliament and applauded her tenacity in campaigning for the law change.

He met her the day after the Government announced all offenders who kill on-duty police and emergency service workers while committing crimes will receive mandatory life sentences.

Harper’s Law, named in memory of her late husband, is set to go on the statute book early next year.

The PC, of Thames Valley Police, was dragged to his death while investigating a burglary near Sulhamstead, Berkshire.

He was chasing a gang of teenage thieves when his feet got caught in a strap hanging from the boot of their getaway car.

There was outrage when they were cleared of murder at the Old Bailey last year. They got just 13 to 16 years behind bars for manslaughter.

They will be freed after serving half the sentence. Lissie’s torment was further increased when the Court of Appeal threw out an attempt by the Attorney General to increase the length of their terms.

Under Harper’s Law, offenders who kill in similar circumstances would be jailed for life for manslaughter.

At a meeting in his Westminster office, Mr Raab told Lissie: “You’ve got a huge amount of support in the country, in the House of Commons, and all because of the tenacity you’ve shown.

“I think you’ve shone a light on something which is really important so I’m just really pleased we can support you and get this done.”

“We knew we would get to this point because we’re just very determined, but I think just the amount of support that people are showing as well just proves how much everyone wants it.”

“There’s a lot of hard work gone into it behind the scenes as well, so… just really pleased.”