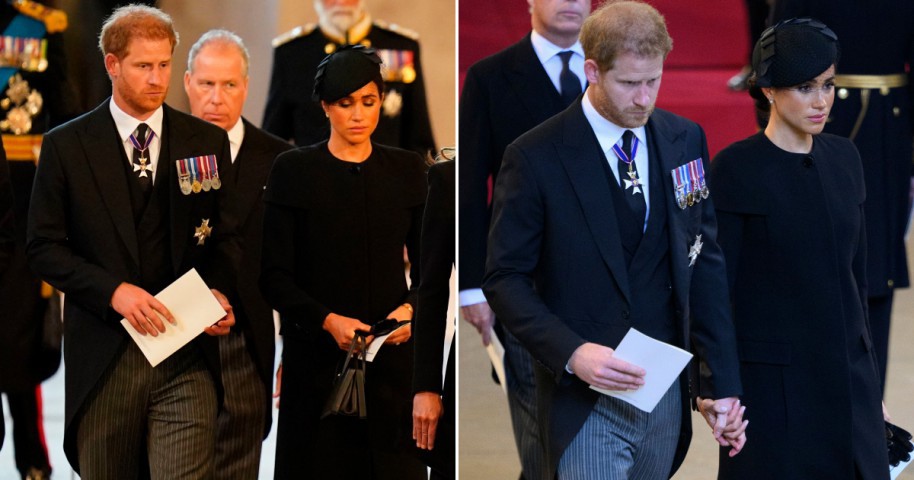 Prince Harry and Meghan Markle both ‘instinctively’ reached for each other as they departed Westminster Hall today.

The couple had held hands as they left the Queen’s lying-in-state ceremony.

It had been emotionally fraught afternoon for Harry as he walked directly behind his father, the new King, and his grandmother’s coffin.

The brothers and their wives then showed a united front after the procession of the casket through London.

Body language expert Judi James – who has long analysed the subtleties of the Royal Family – said Harry and Meghan seemed to have been waiting for the chance to comfort each other.

As the Duchess of Sussex left Westminster Hall, she had an expression of ’empathetic sadness’ on her face, Judi told Metro.co.uk.

She added: ‘It was when the couples filed, still in formation, out of the service.

‘As Harry walked beside his wife they each instinctively reach out an arm to hold hands again, as though the gap in between touching or communicating had been painful for them to bear.’

For many, the sight of Prince Harry and Prince William flanking their father proved a poignant image.

The last time Charles and his two sons had been seen together in public was at the Service of Thanksgiving for the Queen in St Paul’s Cathedral during June’s Platinum Jubilee celebrations.

Today, the brothers walked in a strict formation which didn’t falter when they reunited with their wives, and extended family, at Westminster Hall.

This could indicate that tensions had ‘thawed’, Judi has suggested.

She said: ‘The one important sign that stood out was how William and Harry walked beside one another this time, when at Philip’s funeral they had needed Peter Philips [Princess Anne’s son] in between them as what looked like a buffer. Was this a sign of any thawing?

‘The two men walked with that pre-ordained gap between them and both adopted a military stance, gazing ahead with no signs of any shared glances.

‘The sight of them both couldn’t help but trigger memories of how they walked side by side at their mother’s funeral though, and once inside for the service Harry was seen to rub the edge of his frock coat in a self-comfort ritual and roll his shoulders slightly as though trying to brace himself emotionally.’

William and Harry previously put on a united front with their wives during a mammoth walkabout on Saturday.

The brothers unexpectedly came together when they viewed floral tributes left to the late Queen at Windsor Castle.

William, Kate, Harry and Meghan arrived in the same vehicle and greeted well-wishers for around 40 minutes.