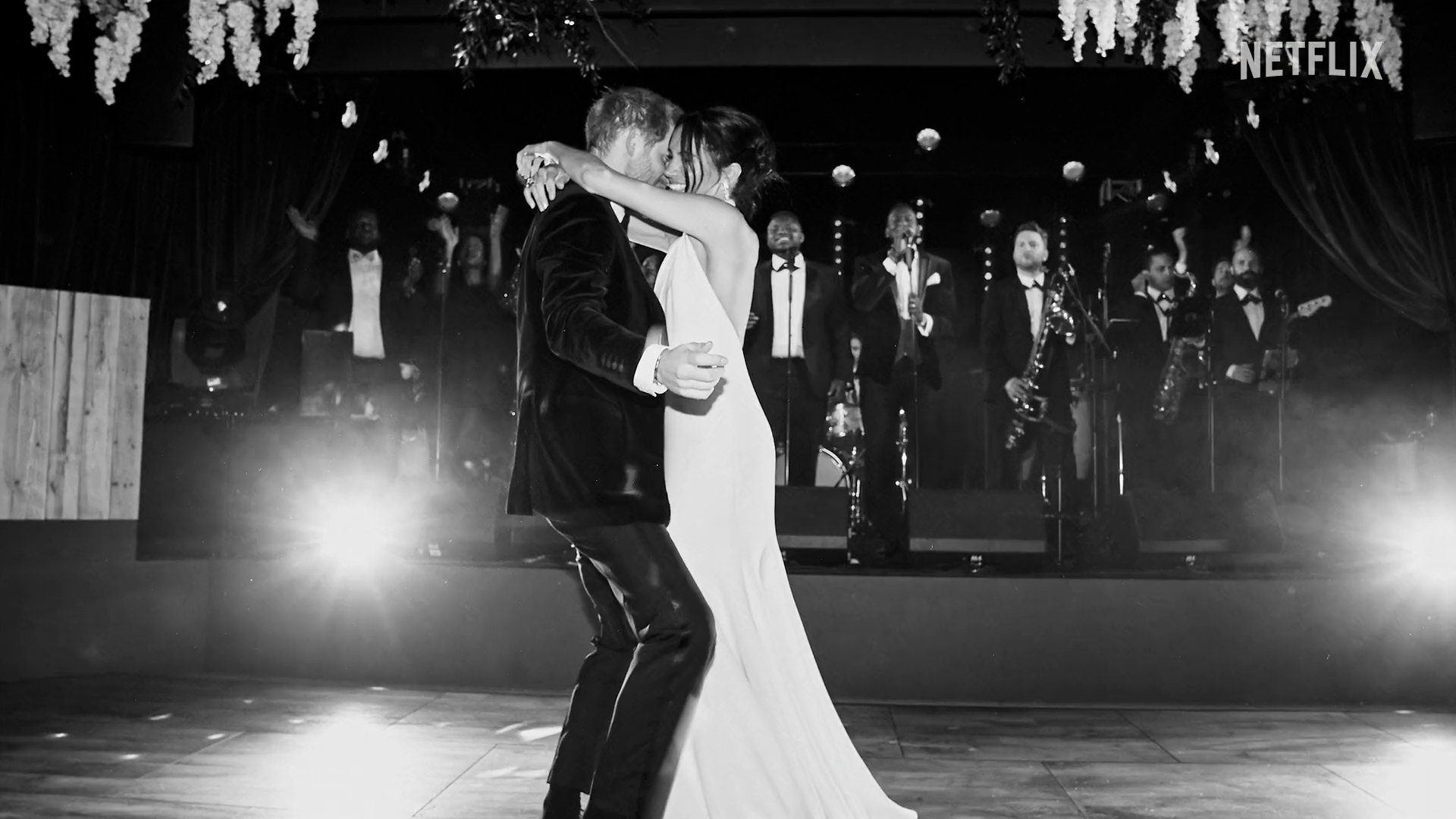 The second volume of Harry and Meghan’s explosive Netflix docuseries has revealed stunning unseen photos from the couple’s wedding.

The Sussexes got married in May 2018 in a ceremony watched by 23.7 million people.

But they managed to keep some moments private, until deciding to release them in the last three episodes of their bombshell series.

Intimate pictures show the couple looking joyous dancing together while another captures Harry laughing with his friends.

Elton John and Idris Elba make appearances in the photos while the late Queen can be seen smiling in green.

Kate is also spotted chatting to guests while William and Meghan’s mum Doria are pictured as well.

Royal fans were also treated to hearing Meghan’s wedding speech in full, when she read it out the final episode.

Check out our dedicated Prince Harry and Meghan Markle tag pages for the latest news.

She said giving a speech was ‘atypical for a bride in the UK’, prompting Harry to add: ‘Very.’

Showing Harry a photo of the speech, she asks, smiling: ‘Am I gonna be able to read that?’

She then begins reading aloud: ‘On to the crux of why I wanted to speak tonight. First of all, it’s been a while (that got a big laugh).

‘But mostly I wanted to share a story, a story that I wrote about the man that I love and the way that we met. Let’s call this a modern fairytale.

‘All of those people didn’t fully get it, because this is the love story of a boy and girl who are meant to be together.

‘They meet on July 3 2016 in London and they giggle endlessly, so the next day they have their second date and he brings her cupcakes because it’s fourth of July, a bittersweet celebration he says, ironic really, her country’s independence from his country, yet in this moment they know they don’t want to be independent of each other.

‘And after a month of long distance courtship they settle into the quiet of Botswana, and amidst whatever momentary worries that creep in, they look at each other and think “Whatever world, we’re in”.

‘They would love and garden and travel and laugh and rack up more airmiles than any couple could have.

‘And when the tides were rough, they squeezed each other tighter, nothing can break us, they’d say, for this love she was a fighter.

‘I appreciate, respect and honour you my treasure, for the family we will create, and our love story that will last forever.

‘So I ask you to raise a glass to the astounding assurance that now life begins and the everlasting knowing that, above all, love wins.’