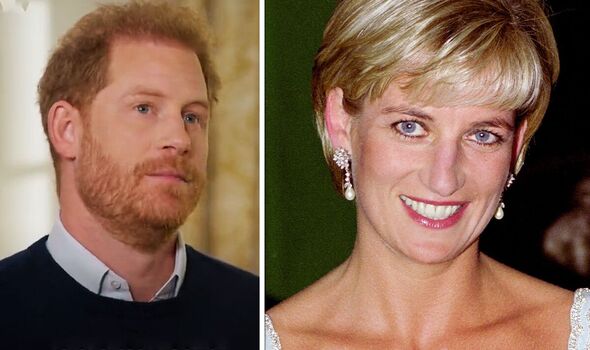 Prince Harry opened up about the devastating details following his mothers’ death in Paris on August 31, 1997. The royal father of two laid bare the horrific moment he viewed the photographs from the aftermath of the deadly crash.

He told Tom Bradby he “saw the back of her blonde hair slumped on the seat”.

In an extract from his bombshell memoir, Harry said the scenes made his “stomach clench”.

He wrote in his autobiography about the paparazzi: “At last, I came to the photos of mummy. There were lights around her, auras almost halos.

“How strange. The colour of the lights was the same colour as her hair. Golden.”

Harry’s ITV interview aired at 9pm which included extracts from his Spare audiobook, recorded by Harry himself.

The royal described the images he saw when he was only 12-years-old.

He said: “I saw the photographs of the reflection of all the paparazzi in the window at the same time.

DON’T MISS:
Prince Harry dismisses royal mantra as he claims ‘lots of complaining’ [INSIGHT]
ITV viewers ‘shaking with rage’ and ‘switch off’ Harry interview [REVEAL]
Harry says it ‘did not need to be’ like this in his ITV interview [SPOTLIGHT]

He also spoke of other photographs “that would probably show my mother’s face and blood”.

However, Harry told ITV that he believed those photographs were kept from him, which he was “grateful for”.

Prince Harry’s interview comes after copies of his highly-anticipated memoir were leaked in Spain several days before its official global release.

‘Spare’ is due for its official release on January 10.