The Duke of Sussex arrived at The Hague at 10.55am today to launch the one-year countdown to the Invictus Games 2020. He was met by Princess Margriet of the Netherlands and chairman of the games Mart de Kruif as he stepped out of the car in front of press and well wishers, some of whom had brought gifts. Some people shouted congratulations to him as he arrived.

The visit comes the day after he and the Duchess of Sussex showed off new addition Archie Harrison Mountbatten-Windsor in a photocall at Windsor Castle.

Parenting expert Suzie Hayman said Harry is likely to find leaving his baby son so soon after his birth “agonising”, and said he would feel a “pang” to be leaving his wife and child.

But Meghan will have her mother Doria Ragland on hand to help at their Frogmore Cottage home while her husband is away on the short trip.

Harry and Meghan announced yesterday they had called their baby Archie Harrison Mountbatten-Windsor after the duchess movingly described her son and husband as “the two best guys in the world”. 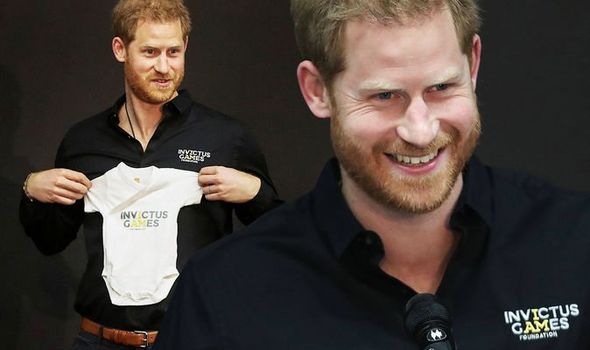 Harry gushed over his son while speaking to the media just hours after he was born on Monday, by calling him “to die for”.

The name is German in origin and means “genuine”, “bold” and “brave”, and is short for Archibald, but is now a name in its own right.

Harrison means “son of Harry” so is likely to be a tribute to the Duke.

It is English in origin and famous Harrisons include the Star Wars actor Harrison Ford.