The head of Russia’s military intelligence agency, who oversaw the hacking of the Democratic Party’s computers during the United States’ 2016 presidential election, died on Wednesday after a long illness, Russian state news agencies reported.

Col. Gen. Igor V. Korobov, 63, had not been seen in public for months and was notably absent from a ceremony on Nov. 2 marking the 100th anniversary of the military intelligence agency, known as the G.R.U. Historically a secretive, little-understood agency, the G.R.U. under General Korobov emerged as Russia’s primary tool of global disruption.

Mr. Korobov was sanctioned by the Treasury Department for the release of emails stolen from the Democratic Party in support of Donald Trump’s campaign in 2016.

Under his watch, the G.R.U. was also implicated in the theft and publication of documents belonging to the presidential campaign of Emmanuel Macron in France, hacking computers of the global antidoping watchdog and the poisoning of a former G.R.U. officer, Sergei V. Skripal, with a highly potent nerve agent in Britain earlier this year.

G.R.U. operatives also play a key role in the wars in Ukraine and Syria.

Such operations have demonstrated Russia’s ability to project its limited power well beyond its borders and remain a relevant international player that the West is still struggling to reckon with. 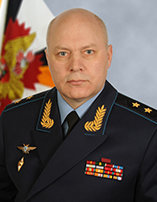 General Korobov was appointed head of the G.R.U. by President Vladimir V. Putin in January 2016 after his predecessor, Igor D. Sergun, died suddenly. But the general’s absence in recent months has fueled rumors about an impending leadership shake-up at the agency.

Russian news agencies cited a Defense Ministry statement which described the general as a “true son of Russia, a patriot of the Fatherland.” And at the G.R.U.’s anniversary ceremony this month, Mr. Putin praised the agency for its “unique capabilities.”

Though General Korobov is one of Russia’s top military officials, very little is publicly known about him. According to his sparse biography on the Defense Ministry’s website, he joined the armed forces in 1973 and joined the G.R.U. in 1985.

Despite Mr. Putin’s recent laudatory remarks, the G.R.U. has had its share of missteps lately. Just weeks after British authorities released photographs and aliases of two G.R.U. officers suspected of poisoning Mr. Skripal in England in March, researchers with the investigative group Bellingcat were able to uncover the officers’ true identities and travel itineraries primarily using publicly available information.

In October, officials in the Netherlands revealed details about a botched attempt by four agency operatives to hack into the computers of the world’s chemical weapons watchdog in The Hague. The operatives were carrying computers with details from previous missions along with an airport taxi receipt showing that they had been picked up outside a G.R.U. headquarters building in Moscow.

Still, the agency’s activities have put Russia’s adversaries on edge and have provoked fierce reaction from the West. Russia has been hit with wave after wave of sanctions as a result of its election interference. After Mr. Skripal was poisoned, Britain and many allies expelled more than 150 Russia diplomats, many believed to be undercover intelligence operatives.