People have taken to social media to share pictures and video of the blaze with Twitter user Aninya Guha tweeting: “Another fire in West London. So close to Heathrow!” Dramatic footage shows a plane coming into land as the fire rages nearby.

About 100 firefighters from London Fire Brigade are fighting the flames at the grass fire near Hatton Road in Feltham. Fifteen fire engines are at the scene.

The site of the fire is less than two miles from Heathrow Terminal 4.

Heathrow Airport ramp agent Reece Dickinson tweeted: “Big fire just outside of Heathrow airport. No idea what it is.” 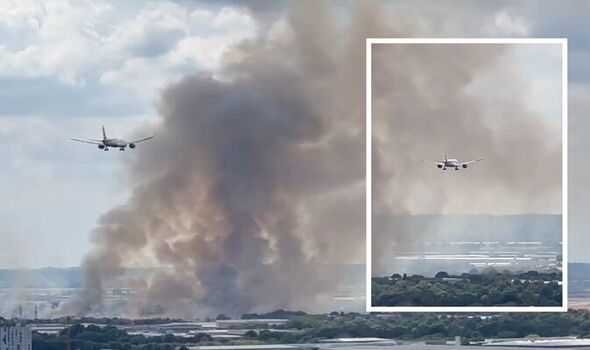 Fifteen fire engines and around 100 firefighters are tackling a grass fire near Hatton Road in #Feltham. More info to follow pic.twitter.com/KEYycBqqif

Heathrow Airport and London Fire Brigade have been approached for more details.

The flights hub diverted planes to land at its northern runway with jets taking off from its southern runway after the blaze broke out.

It tweeted just before 3.30pm today (August 1): “Good afternoon, due to smoke from a fire off-airport we will be switching back to landing on the northern runway (27R) and taking off from the southern runway (27L). We apologise for the disruption.”