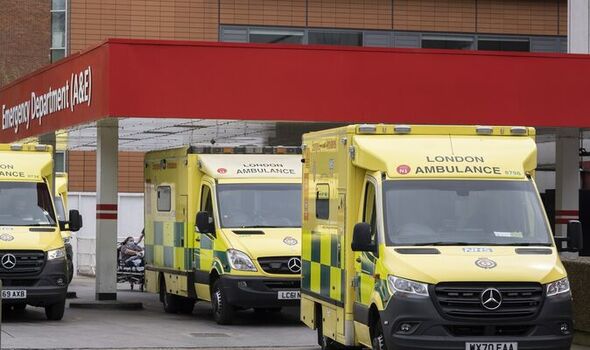 Katherine Henderson said the combination of bed and staff shortages, covid infections, the lack of social care together with the threat posed by record temperatures next week has left the service facing a threat similar to the first waves of the pandemic. Dr Henderson spoke following new figures which revealed almost 200,000 patients have come to harm because of ambulance delays since the start of this year. The figures from the Association of Ambulance Chief Executives showed 20,000 of these patients came to “severe harm.”

Dr Henderson warned next week’s heat wave would exacerbate the problems and risk unnecessary deaths for patients waiting for care.

She said: “We always need to get patients out of the back of an ambulance as quickly as possible and this is particularly important in a heatwave. Patients lying in a metal box with up to 40C heat outside on an ambulance ramp could be lethal. We need to find a way of cohorting the lowest risk patients out of the emergency area into a separate place to allow patients through and not shove them in corridors or cupboards. The heatwave is adding to the strain on an already overstretched healthcare system and is posing an extra danger. People need to heed warnings and take care in the heat so we can maximise our hospitals.”

Longer term she called for “an army of health care workers” to be recruited so patients can be discharged safely from hospitals and looked after in understaffed care homes as well as in their own private homes.

“This will become even more crucial as we come into winter and see a spike in illness and respiratory viruses like influenza and covid,” she said.

She added: “We view the current challenges as big as the pandemic has been over the past two years.”

Yesterday NHS England told trusts to ensure patients are not kept waiting in ambulances outside hospitals for more than half an hour during the unprecedented heat wave due to the deadly risks. Trusts were told to maintain flow out of emergency departments so new patients could be admitted.

In a letter it acknowledged its demand wouldn’t be easy and would place an “additional burden on staff” during a challenging time.

Under current NHS targets all handovers between ambulance and A&E must take place within 15 minutes, with no patient waiting more than 30.

However a recent Association of Ambulance Chief Executives report showed the average time for a patient handover in April was 36 minutes – more than double the 17 minutes recorded a year earlier and well above the target of 15.

A staggering 11,000 handovers took more than three hours with the longest delays being 24 hours.

Experts say A&E services across England are at breaking point as record numbers of patients flood back into the system after years of delays caused by the Covid pandemic and restrictions sparking record waits in casualty units.

Campaign groups, MPs and senior medics also say desperate patients are turning to emergency and walk-in services because they can’t get a face-to-face appointment with their GP.

Meanwhile a new report by the Royal College of Emergency Medicine showed there had been a cut of 25,000 hospital beds since 2011.

Ruth May, Chief Nursing Officer for England said: “The current heatwave will inevitably add to existing NHS pressures from rising Covid admissions, staff absences due to the virus and record demand for ambulances and emergency care.

“While Trusts do have tried and tested contingency plans in place, we would of course ask the public to continue to take care in the heat – keeping hydrated, wearing sunscreen, staying in the shade and avoiding the hottest parts of the day where possible, whilst also looking out for others who are more vulnerable.

“Advice on what to do if you do get heatstroke is available on our website, or if you are experiencing symptoms you don’t feel able to manage yourself then please do use 111 online and local pharmacies for advice. It remains important that anyone needing emergency care continues to call 999.”