Londoner attempts to brush away flood water at King's Cross

Days after a scorching heatwave, forecasters warned there was a “danger to life” in London and the South-east, with up to two inches of rain expected. 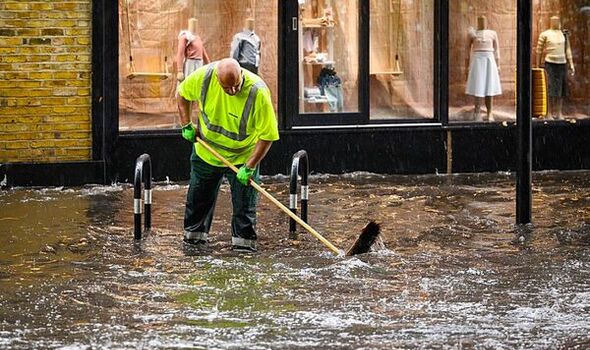 Lightning, hail and strong winds hit regions including Suffolk, Kent, Surrey and West Sussex. And a hospital urged patients to attend A&E only if their need was “urgent or life-threatening” as the building was flooded.

Bassetlaw Hospital in Worksop, Notts, said heavy rainfall meant “water was able to get into a few parts of the building”. The hospital said in a Facebook post that staff were “hard at work” fixing the problem.

Flash floods disrupted many parts of London – with one man, near King’s Cross station, filmed using a broom on shin-deep water. The video’s caption read: “The flash flood that just happened in London is insane the rain was incredibly mad.”

Huge pools of water filled the road outside Chiswick Park Tube station after a downpour lasting two hours from 3pm. Local barber shop owner David Rogers, 35, said: “Range Rovers, Porsches and just every day cars were battling through it. It was up to my knees.”

Elsewhere in the capital, torrential rain forced commuters to wade through knee-deep water. Further north, roads became severely flooded in both Market Rasen, Lincs, and Standon, Herts by the afternoon.

The destructive wet weather is expected to continue into the weekend, with periods of showers and thunderstorms. 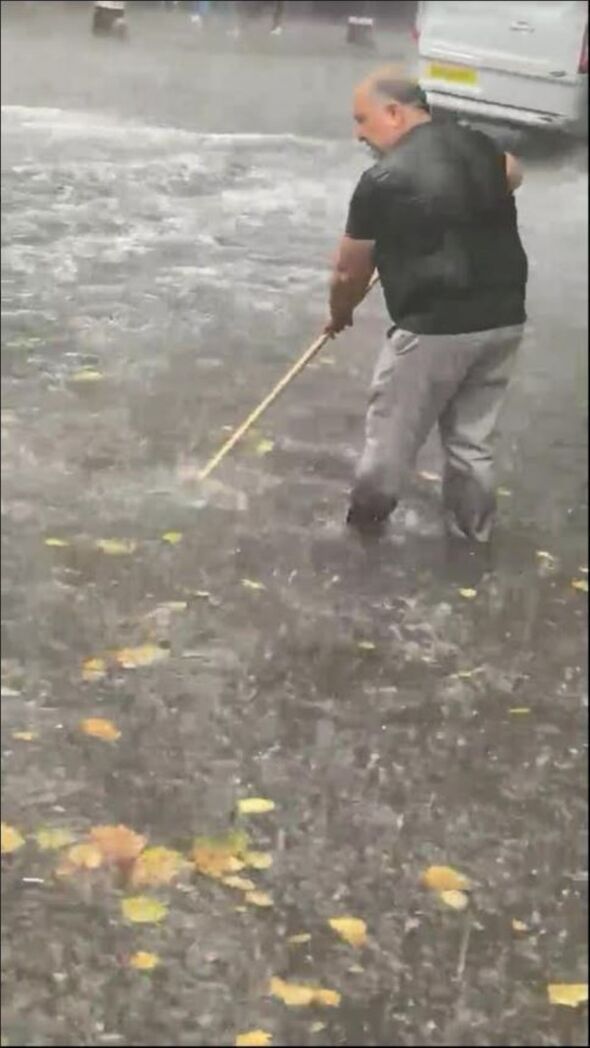 Met Office deputy chief meteorologist Dan Rudman said: “The main theme for Saturday is unsettled spell of weather with some showers but also some sunny spells, while some gusty winds and more consistent rain could affect the North-west.

“Later in the weekend, and into early next week, a warm front is expected to move in from the Atlantic, which brings with it some further rain from the west, gradually spreading eastwards.

“The heaviest rain, and highest totals, are expected to be in western areas but as the front moves eastwards it should weaken. The South-east in particular could stay mostly dry.”

Temperatures in the North will reach 72F today while the South will be warmer at 79F. Meanwhile, the driest weather for decades has forced the relaxation of strict environmental rules, the Government announced yesterday.

Farmers with the Countryside Stewardship or Environmental Stewardship schemes can now cut or graze additional areas of land to help ease shortages of bedding, fodder, grazing or forage crops.

The Department for Environment, Food and Rural Affairs (Defra) said the shift will take effect immediately and will last until the end of the year. 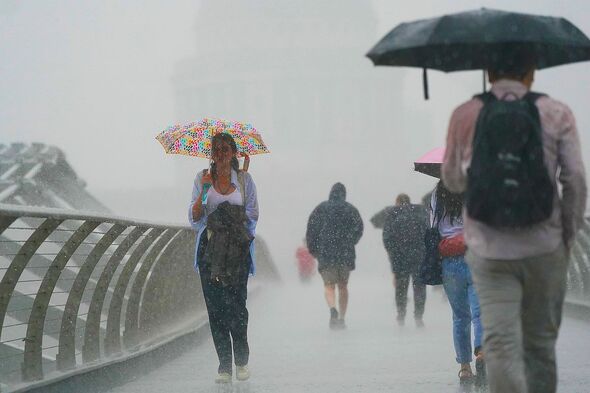 Environment Secretary George Eustice said many farmers are concerned about water supplies and the impact on their crops and livestock. He added: “We are introducing temporary easements on agri-environment schemes to give them the flexibility to respond.”

Defra said it may introduce further measures in the coming weeks. At the same time, more than 30 million people will be unable to water their gardens by the end of next week after Thames Water announced a hosepipe ban.

Despite three days of rain, it said water levels in its reservoirs were “much lower than usual”. The company, which supplies 15 million people, will put a temporary use ban in place from next Wednesday August 24 for people in London and the Thames Valley.

Sarah Bentley, Chief Executive of Thames Water, said it had been a “very difficult decision”. She said: “After months of below-average rainfall and the recent extreme temperatures in July and August, water resources in our region are depleted.

“Customer demand is at unprecedented levels and we now have to move into the next phase of our drought plan to conserve water, mitigate further risk and future-proof supplies.”

Manx Water, Welsh Water, Southern Water and South East Water have already imposed hosepipe bans. A drought was officially declared across most of England last week following the driest July for 50 years and the driest first half of the year since 1976.

The latest restrictions by Thames Water followed reports of the River Thames reaching its lowest level since 2005, amid “unprecedented weather conditions”.

Only businesses and farmers will be allowed to use hosepipes – and those found to breach the rules could be fined up to £1,000.

Firms remain under pressure to conserve water by stopping the 2.4billion litres leaked daily due to underfunded infrastructure.

Thames Water has said it is hard at work fixing leaks across its 20,000-mile network.

The firm announced: “We have more teams reducing leakage than ever before, working 24/7 to fix more than 1,100 leaks weekly.”