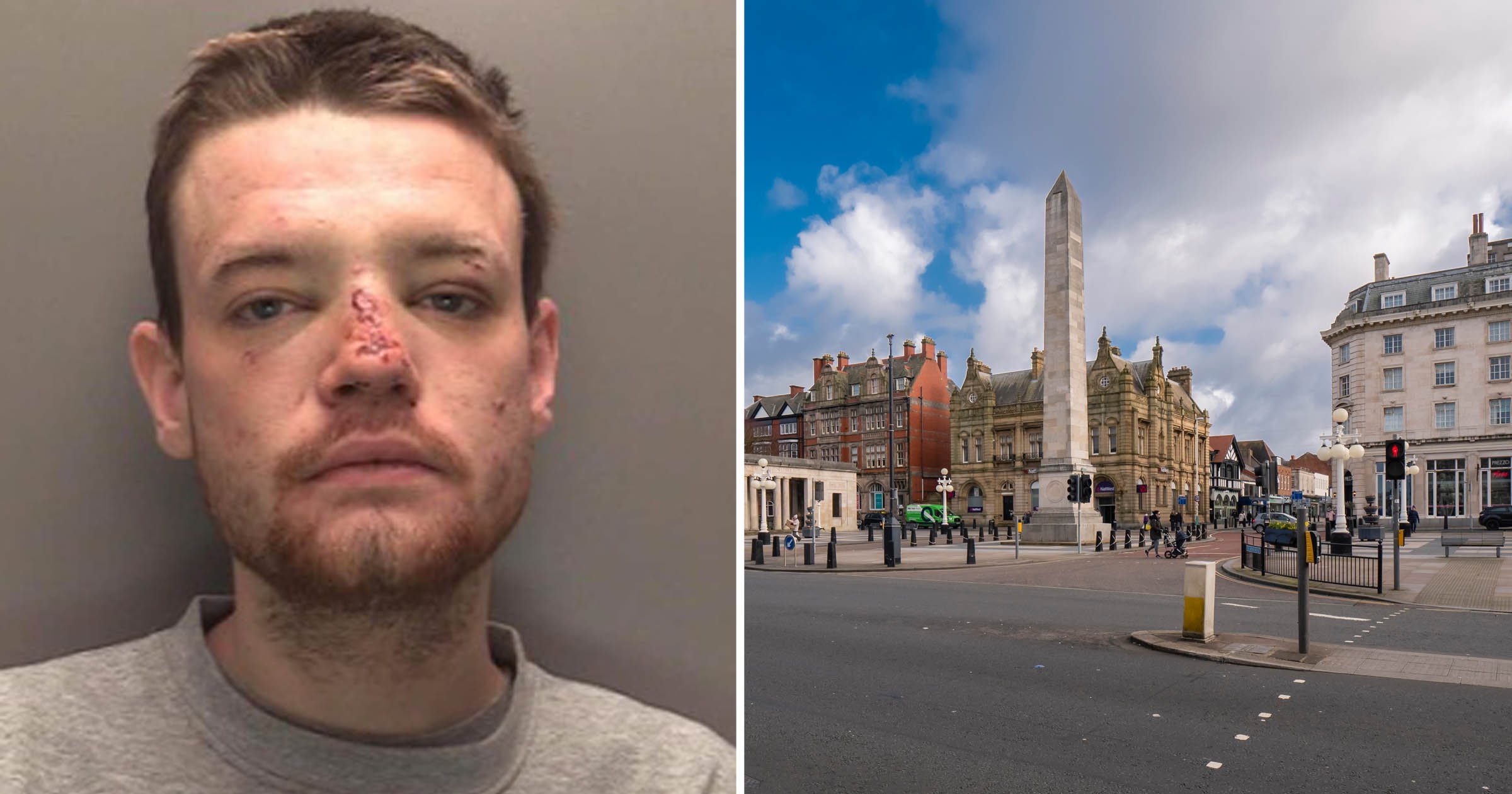 A ‘dangerous’ rapist was caught when a brave passer-by broke up his ‘brutal and terrifying’ attack and held onto him until police arrived.

Christopher Fletcher grabbed Steven Lequesne, 23, in a headlock and punched him after hearing his victim screaming ‘no’ as he forced himself on her in some bushes in Southport, Merseyside.

Harrowing CCTV footage of the attack showed Lequesne ‘ducking down behind the bushes’ just moments earlier as a police car drove by.

Lequesne ‘preyed’ on the woman after meeting her on a night out, Liverpool Crown Court heard.

Robert Wyn Jones, prosecuting, said the victim had been drinking at the Metropole Hotel in Portland Street earlier that night.

The pair spent some time there together before footage picked them up walking through Southport railway station shortly after 1am.

Mr Wyn Jones said: ‘She is clearly drunk. She doesn’t have any shoes on and she is stumbling.’

The clip shows an ‘altercation’ between them before the woman turned and tried to run off.

But Lequesne ‘pursued her’ and dragged her to the floor as she tried to ‘fight him off’ before attacking her in some hedges bordering a car park.

The prosecutor said Lequesne ‘ducked down behind the bushes’ to hide from a passing police car moments before Mr Fletcher walked past and heard his victim screaming ‘no’.

Describing what follows on the footage, Mr Wyn Jones said: ‘Mr Fletcher takes hold of the defendant around the neck in a chokehold.’

He said the have-a-go-hero then tackled Lequesne to the ground and held him there until police arrived to arrest him. The victim was found nearby ‘extremely distressed’.

Lequesne denied rape when interviewed, but was linked to the attack by DNA evidence and later pleaded guilty.

Mr Wyn Jones said the victim is now afraid to go outside and is ‘constantly looking over her shoulder’.

She attempted to go back to work but broke down and has not gone back since, so is now on Universal Credit, he added.

Mr Wyn Jones said: ‘She has a much more limited group of friends she says now because she finds socialising and trusting people very difficult.’

Lequesne, also known as Stephen Lequesne, has 15 previous convictions for 21 offences, including harassment in 2018 and two offences of outraging public decency in 2020.

The judge, Recorder Matthew Corbett-Jones, told him: ‘It’s plain to see you had seized this opportunity when she was alone and vulnerable to prey on her.

‘This was a brutal and terrifying attack on a defenceless woman, in order for you to satisfy your desire for sexual gratification, which I have no doubt will cast a shadow across the rest of her life.’

He added: ‘It was only when a brave member of the public came to her rescue that her ordeal came to an end.

‘Christopher Fletcher showed all the qualities of a brave, decent, upstanding member of the community in tackling you and summoning the police.

‘Your actions that night show to me you are the opportunistic and highly predatory individual that you clearly are.’

Lequesne was also ordered to sign the sex offenders’ register for life.

Recorder Corbett-Jones said he wanted to commend the brave behaviour of Mr Fletcher and ‘pay tribute to him’.

He added that he would be putting Mr Fletcher forward for formal recognition.