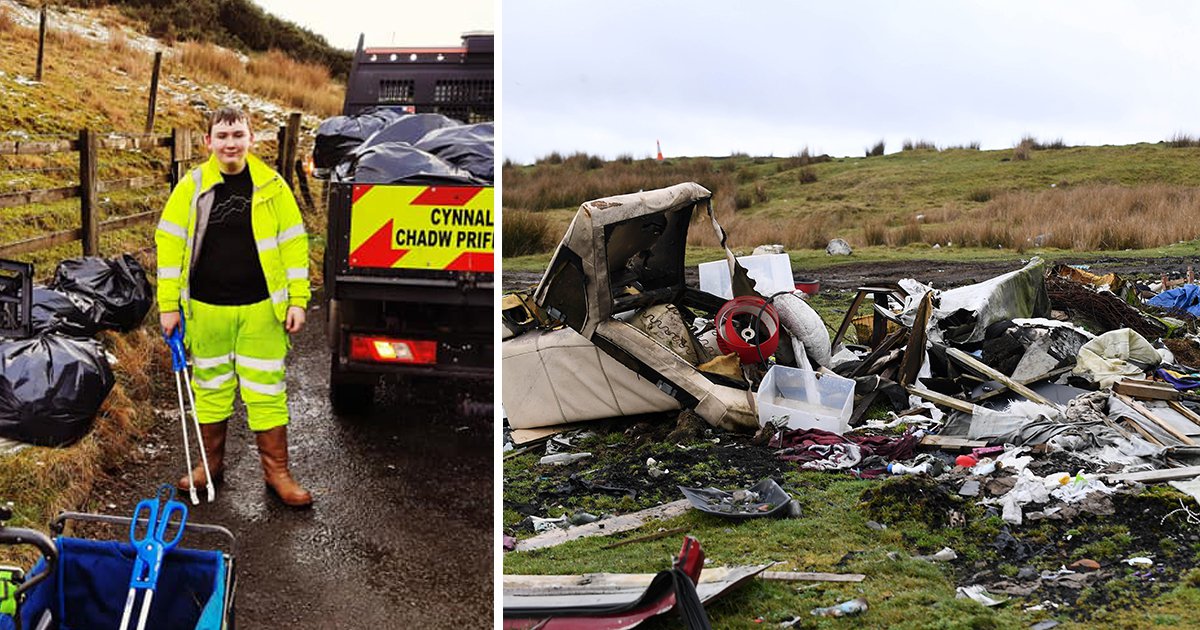 A teenager has been given the nickname ‘SuperDan’ after clearing more than 18 tonnes of rubbish that had been dumped on a country road.

Daniel Lewis, 16, embarked on a one-boy mission to tidy up his local area after being outraged by the mess left by fly-tippers.

He’s refused to get down-hearted, despite having to return to same spot three times when the rubbish piled up yet again.

The waste included old furniture, children’s toys and clothes and 130 used tyres that had been discarded in Merthyr Tydfil, South Wales, in the last year.

Dan set up litter picks and a community skip scheme to provide free skips to villages around his home town.

He said: ‘I was walking up near Bogey Road in Merthyr last week when I noticed there was a lot of old tyres and litter that looked absolutely terrible on the side of the road.

‘I had already been up to this spot on clearances three times in the last year or so, and seeing so much of it dumped up there again was very annoying and frustrating for me.

‘There was just so much of it, and to see how fast it builds up is crazy to be honest with you. I contacted a number of local businesses that have been helping me with my projects recently and we agreed to get it all cleaned this week.

‘We started at around 7am with a grab picker lorry, and it took us a good three or four hours to get it all cleared and transported to a refuse site.

‘I’m just hoping now it’s done we won’t have to go back to this spot for a good while.

‘Of course it can sometimes feel like you’re fighting a losing battle when you see the mess left just weeks after a clean, but I’m not going to give up on the amazing beauty spots we have here in Merthyr.’

Dan, who loves nature and wildlife photography, hopes people will notice the clean-up and it may stop them from fly-tipping in the area.

Local businesses donated their services to help him dispose of the rubbish for free.

Ashley Edmunds, 32, who provided a skip and grab lorry said the mess on the road was a terrible sight when they arrived.

‘It was shocking to see it like that when we arrived, and to be honest this is just the tip of the ice-berg when it comes to fly-tipping in Merthyr at the moment. It’s an issue that does seem to be getting worse as more and more people keep leaving their waste on the mountains,’ he said.

Dan’s mum Lesley Lewis said she was ‘incredibly proud’ of the work her son is doing – as well as to see the pride he has for the area he lives.