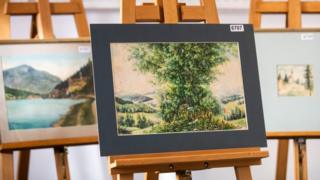 Five pictures said to have been painted by Nazi leader Adolf Hitler have failed to sell at auction in Germany.

The auction was held in Nuremburg, the German city once notorious for Hitler’s mass rallies where leading Nazis were later tried for war crimes.

Accusations of forgery marred the auction and city mayor Ulrich Maly described it as being in “bad taste”.

The sale also included items said to have been owned by the dictator, including a vase and a wicker chair with a swastika on its arm.

Under Hitler’s rule (1933-45), Nazi Germany began World War II, pursuing a genocidal policy that resulted in the deaths of some six million Jews, and tens of millions of other civilians and combatants.

Public displays of Nazi symbols are against the law in Germany – except in some contexts, such as for educational or historical reasons.

The auction house got around the law by pixelating the symbols within their catalogue.

What problems did the auction face?

Dozens of artworks, including some set for sale, were seized from the auction house last week by German police.

Prosecutors said a total of 63 items bearing the signatures “AH” or “A Hitler” were confiscated over forgery concerns.

She confirmed the auction house had co-operated and handed the works over voluntarily.

Sales of paintings purporting to be from the dictator regularly generate controversy and accusations of forgery.

Last month German police seized a collection due to go on sale in Berlin over concerns over their authenticity.

Hitler, who was twice rejected by the Vienna Academy of Fine Arts, is known to have sold his artwork in his youth.

Dozens of works attributed to him, which were regarded by art experts as being of poor quality, have been sold over the years.

In 2015, Weidler auction house sold more than a dozen paintings attributed to Hitler for almost €400,000.

The sale of Nazi memorabilia remains a divisive topic around the world.

Some buyers say it is for historical reasons, but campaign groups warn items are also purchased by far-right group members who idealise the regime.