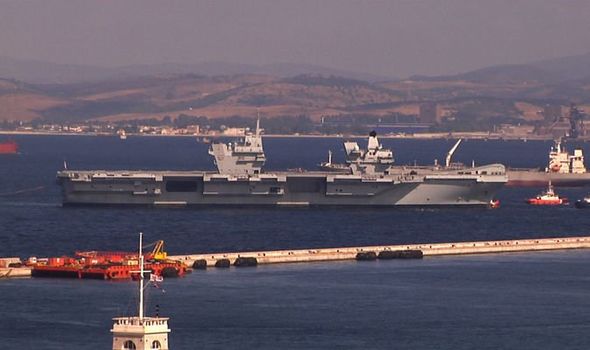 The Royal Navy aircraft carrier has arrived in the Mediterranean destination for a programmed logistics stop during sea trials. HMS Prince of Wales, which is 70 metres wide, 280 metres long and weighs 65,000 tonnes, has enough space for three football pitches and can carry 700 crew members and 40 helicopters.

HMS Prince of Wales announced the arrival via its official Twitter account. A spokesperson said: “Hello Gibraltar! It’s been a fair few years since the name HMS Prince of Wales has graced yours shores. We are looking forward to it.”

The Royal Navy say that the carrier is undertaking a period of trials and training, establishing her lethality and ability to sustain operations.

The vessel is one of the most powerful surface warships ever constructed in the UK and will be used for humanitarian relief, high intensity warfighting and combatting terrorism.

Commanded by Captain Darren Houston, HMS Prince of Wales has recently completed sea trials off the south coast of England, but this is the carrier’s first non-UK port visit.

On June 23, the ship boarded its first Royal Navy Reserve trainees. A spokesperson said: “With us for four weeks, they will learn about how the ship operates and develop the knowledge that they will need to pass their fleet boards!”

On June 9, the vessel embarked her first F-35 jet. The Royal Navy said in a statement: “An F-35B Lightning aircraft has landed onboard HMS Prince of Wales. The milestone marks a significant step towards the vessel reaching full operational capability.

“Operating together as part of Sea Acceptance Trials, it is the first time a fixed wing aircraft has landed onboard HMS Prince of Wales. The trials test the ship’s capability to receive and launch aircraft whilst maintaining continuous air operations.”

During the stop in Gibraltar, Captain Houston will hand over command to Captain Stephen Higham who joined the Royal Navy in 1997. During his service, he has commanded five ships and supported operations in the Arabian Gulf, Iraq, Afghanistan, Libya and Syria.