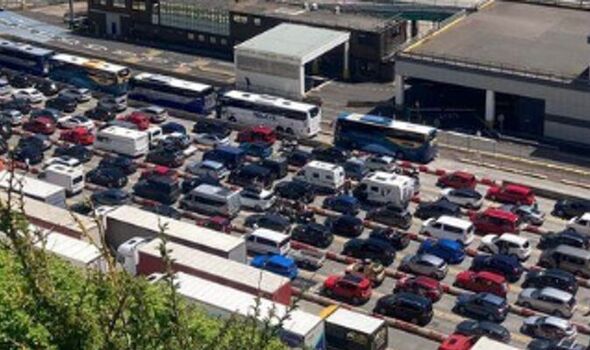 The disruption began yesterday (May 28) when travellers were met with extremely busy roads and cancelled Easyjet flights ahead of their half-term holidays.

Now it has only gotten worse as French border police open just two passport gates to deal with the incoming travellers.

P&O Ferries said delays were “out of their control” as the border controls were operated by French border police.

In a statement the Port of Dover said the situation was likely to remain in place for “a number of hours”.

It said: “The Port is working with its French counterparts to move tourist traffic through the Border Controls as quickly as possible.

“The Port is very busy working with all the Ferry Operators to minimise delays once through the Border Controls.”

Infuriated travellers have blasted the “bad organisation” of the French border control.

One described it as a “total outrage”, adding they had been queuing for three hours and expected even more.

Another said they had been “waiting almost two hours and have already missed our ferry”.

They described the situation as “seriously bad organisation”.

Others report moving just 100 metres in the space of hours, while more add that they have queued for a total of six hours.

In addition to delays at border control, the Port of Dover warned that it had seen tourists arriving without tickets.

It added: “The Port is very busy and is seeing tourists arriving without tickets. Please do not travel to the Port of Dover unless you have a booked ticket for travel.

“Your Ferry Operator will put you on their next available sailings.”

Traffic remains at a standstill on the A2 Jubilee Way.

One lane is also closed on the A20 coastbound from Roundhill Tunnel due to Dover TAP being implemented this morning.

Bus company Stagecoach has also tweeted to say it is unable to serve certain bus routes in Dover due to the problems.

The huge congestion comes amid an event-packed weekend, with fans heading to the Champions League final in Paris yesterday and families leaving for Europe for school’s half term and the Platinum Jubilee.