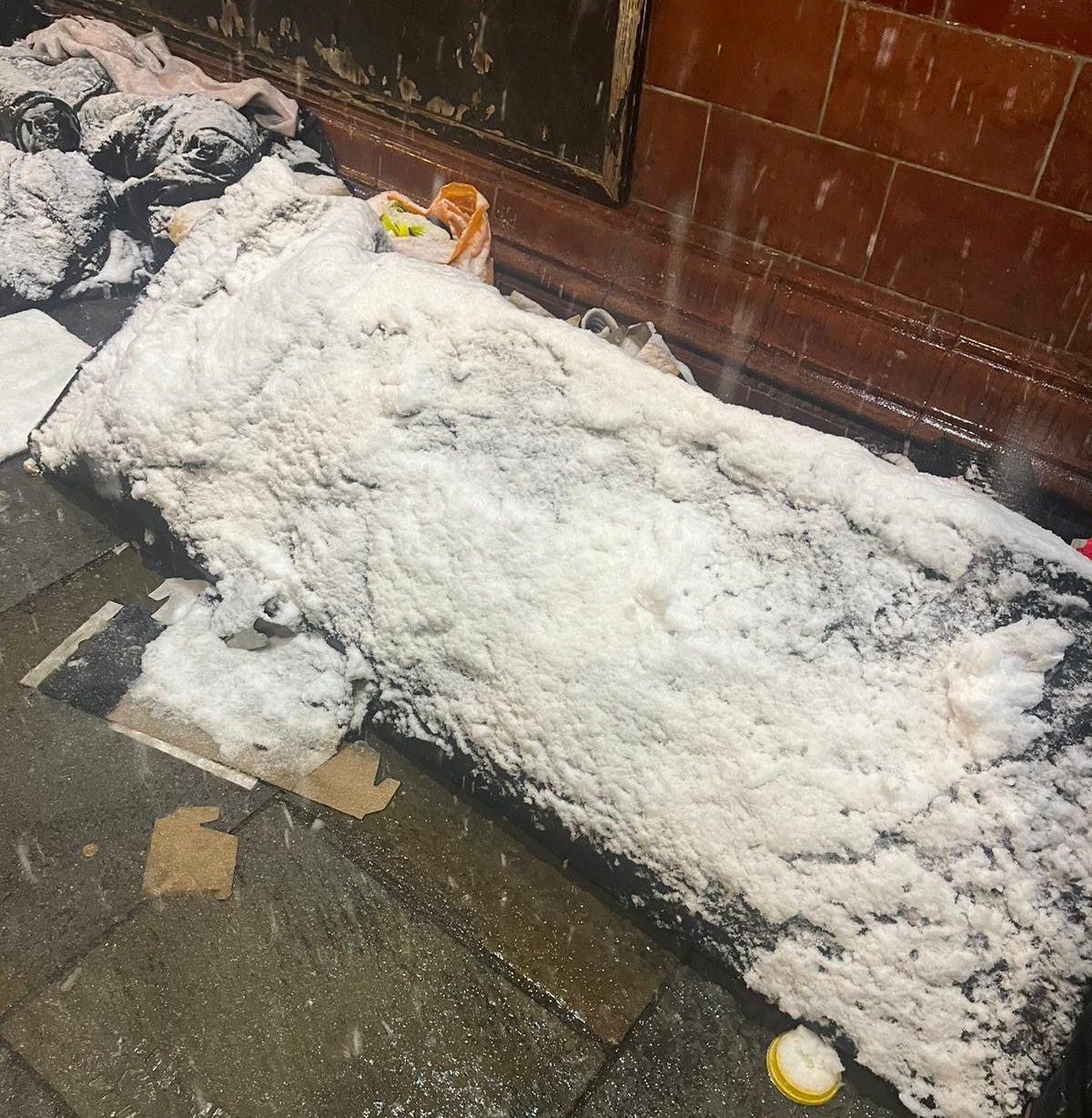 People living on the streets are ‘freezing, blue, shivering and scared’ and some will freeze to death, as more sub-zero temperatures are predicted this winter, a grassroots group has warned.

Streets Kitchen volunteers, who head out every day to deliver essential items, are still seeing 50 to 70 homeless people outside a day in different parts of London.

Those delivering aid say they have been left with the impossible decision of ‘who gets a sleeping pod and who doesn’t’, with snow and icy conditions gripping the UK over the past week.

Snow engulfs a sleeping bag lying on the hard, cold street in one picture taken in the capital, highlighting the haunting conditions people are facing.

It comes despite a number of authorities across the country, including in London, activating the Severe Weather Emergency Protocol (SWEP).

SWEP is triggered when temperatures fall below 0°C and is designed to ensure councils open additional emergency accommodation for people sleeping rough when there is an increased risk of death due to the weather.

At least 741 people died while homeless – two every single day – in England and Wales last year, according to figures from The Office for National Statistics (ONS).

Describing what she has seen in the past week, one of the organisation’s coordinators, Elodie Berland, told Metro.co.uk: ‘We arrived to a park to find a frozen sleeping bag, people with barely anything on just sleeping on the cold floor, people hiding in bushes and on top of vents around hospitals and stuff trying to keep warm, to stay safe.

What can you do to help homeless people?

‘Look around yourself, see what’s happening. Talk to people and see if they’re okay’, says Jon from Streets Kitchen.

‘If they need to get accommodation, contact a local council, or use the Streetlink app, but always make sure that you’ve talked to that person first, that that person’s happy for you to do that.

‘Basically, just show an element of solidarity. We all could be there.

‘We meet people who have fantastic jobs and fantastic relationships and then just a small thing breaks down and you can spiral into homelessness, which is terrible.

‘My advice is, just be aware, and to try to volunteer with local groups if you can.

‘Put pressure on your local councils to get more support for homeless services in your area.’

If you’re in England or Wales, one of the best things to do if you see someone who is sleeping rough is contact Streetlink.

Essentially, this allows you to send an alert to a local outreach service – such as your Local Authority or a homeless charity like St Mungo’s.

They will then be able to locate the person sleeping rough to make sure they know about the support available to them.

If the person appears to be under 18, you should contact the police instead.

Call 999 in an emergency if you believe someone needs immediate medical attention.

Aside from Streets Kitchen, there are a number of UK charities you can donate to, including (but not limited to):

If you want to offer something to a rough sleeper directly, you can always ask if they would like anything to eat or drink.

Speak to them first to ensure it’s something they want or need, and Shelter also says it’s okay to provide blankets, or warm clothing.

If you can’t offer anything, you can always offer a friendly hello and check they’re alright.

‘There are old ladies, young girls, everyone’s just shivering with not enough clothes on, sometimes no shoes on.

‘We saw 53 people Tuesday morning, and every single one of them needed a bag and some socks, so we ended up having to make choices about who is going to get them.

‘It’s a really hard thing to do, it is first-come-first-served. The first person you see, you can tell they are freezing, they’re blue, they’re shivering, so you give them that sleeping bag and hope you don’t see anyone after, but you do.’

A spokesperson for Sadiq Khan, mayor of London, said on Wednesday there is still capacity in emergency accommodation and outreach teams are working hard to get people inside, with an unspecified number declining the offer for various reasons.

But Streets Kitchen’s founder Jon Glackin has argued that SWEP isn’t working – despite ‘fantastic work from underfunded outreach teams’ – as it’s a humanitarian obligation, rather than a legal one.

‘We’ve been seeing fewer people outside, but there are still far too many left out there’, he said.

’People will die in that weather and it’s going to go on for at least another week. There are solutions to it. If we could get councils, and that’s across London, to take it seriously.

‘A massive problem is the lack of suitable accommodation locally for those in need, which is very frustrating when one sees just how many empty buildings could be immediately put to good use.

‘The pandemic highlighted that, with the right political will, everyone can be and should be accommodated, we need that same desire from the government urgently.

The number of people sleeping rough in London has jumped 24% in the past year, meaning more than 3,600 people slept on the capital’s streets between June and September.

The record for the coldest night of the year has been broken twice in a row this week – but bad weather is set to continue, with warnings issued by the Met Office.

Jon has issued a bleak warning: ’It has to be made law that people can’t be left out such life-threatening weather.

’As things stand, more people are definitely going to die experiencing homelessness than ever before.’

The mayor’s office says Mr Khan’s rough sleeping services are helping more people than ever before, with more than 13,500 rough sleepers supported off the streets since 2016.

A spokesperson for Mr Khan, said: ‘Outreach teams have been working day and night to offer people sleeping rough a place in emergency accommodation and there is still capacity, with City Hall continuing to work with boroughs, service providers and the faith-based sector to ensure there is a place for anyone who wants to come in during this SWEP period.

‘Where a rough sleeper declines this offer, outreach teams will continue to check on their welfare and provide support to help them off the street.

‘There is always more to do and City Hall is working extremely hard with boroughs and charities to prevent anyone sleeping rough in these freezing conditions as we work to build a fairer and safer London for everyone.’