Holidaymakers in Spain have been given hope after the UK government revealed it is considering setting up regional travel corridors to let those travelling from low-risk areas escape quarantine.

Lords minister Baroness Vere of Norbiton confirmed the idea was being investigated after pressure from Madrid over the change to travel advice made by the government over the weekend.

She told parliament on Tuesday: “For the time being, we are taking the approach by country for border measures but it is the case that it could be that we put them in place for regions in the future.

“We are not there yet but we are certainly looking at it because it is an appropriate consideration.”

Local government minister Simon Clarke earlier defended the government’s decision to warn against all non-essential travel to Spain and the Balearic and Canary islands.

“We saw a 75% increase in cases on Thursday and Friday relative to Tuesday and Wednesday last week – that’s what has prompted this intervention,” he told Sky News on Tuesday.

“We are living in a world where things can move suddenly and very seriously, and that’s what appears to be happening in parts of Spain.

“We have to therefore make a decision as a government over what is best to make the UK safe.” 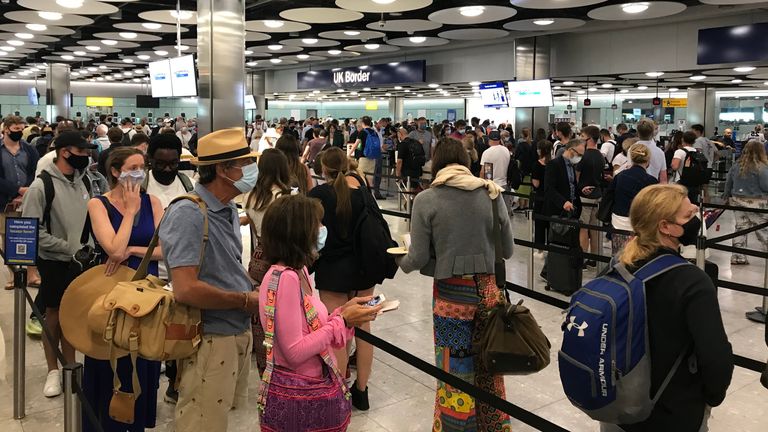 Spanish Prime Minister Pedro Sanchez said on Monday that his country is in talks with UK authorities to make them reconsider the decision to impose quarantine measures.

Mr Sanchez pointed out that the upsurge in Spain’s coronavirus cases is focused in two regions, Catalonia and Aragon.

He added: “In most of Spain, the incidence is very much inferior to even the numbers registered in the United Kingdom.”

The Spanish government wants the UK to exempt travellers to the Balearic and Canary islands from the newly-announced two-week quarantine.

Labour’s shadow transport secretary Jim McMahon told Sky News: “We’ve seen in the UK where individual cities and towns have had different interventions… because it recognises where you have a localised spike, that’s where you have to concentrate efforts and make sure the infection doesn’t spread.

“Now obviously that’s more difficult when people are going from one country to another, and how you manage that is always going to be a challenge. But what we were led to believe is that the government would take a more localised approach.

He added: “But we haven’t seen that, we’ve seen a very blunt tool if you like, again, where the government has imposed restrictions on the whole of Spain including the islands.” Daniel Trigg, chairman of the Lanzarote Business and Residents’ Association, said he was caught off-guard by the UK government’s decision to apply a blanket rule across all of Spain and its islands.

He added that Lanzarote, in the Canary Islands, currently has just one case of coronavirus.

Mr Trigg said: “It came out of nowhere. We do not understand how the Canary Islands can be included.

“We’ve complied with everything and just do not understand why we’re all put in the same category as mainland Spain.”

Mr Trigg urged the British government to reconsider the decision due to Lanzarote’s reliance on tourism for income and its precarious outlook for jobs.

He added: “Thousands of people will be put out of work and will never recover. Some businesses will just not last this.

“You’re (the UK government) going to wipe out a lot of business and a lot of hard working families, including a lot of self-employed people in the tourism sector.”

Spain’s tourism minister Reyes Maroto insisted it was safe for holidaymakers to visit the popular destinations.

She said: “We’ve been talking all weekend. What we’d like is for quarantines to be lifted on the islands as early as possible and we hope it will be today rather than tomorrow.”

Spain’s tourism association – known as CEHAT – has offered to pay for tourists to take coronavirus tests and called the quarantine decision “illogical” and “unfair”.