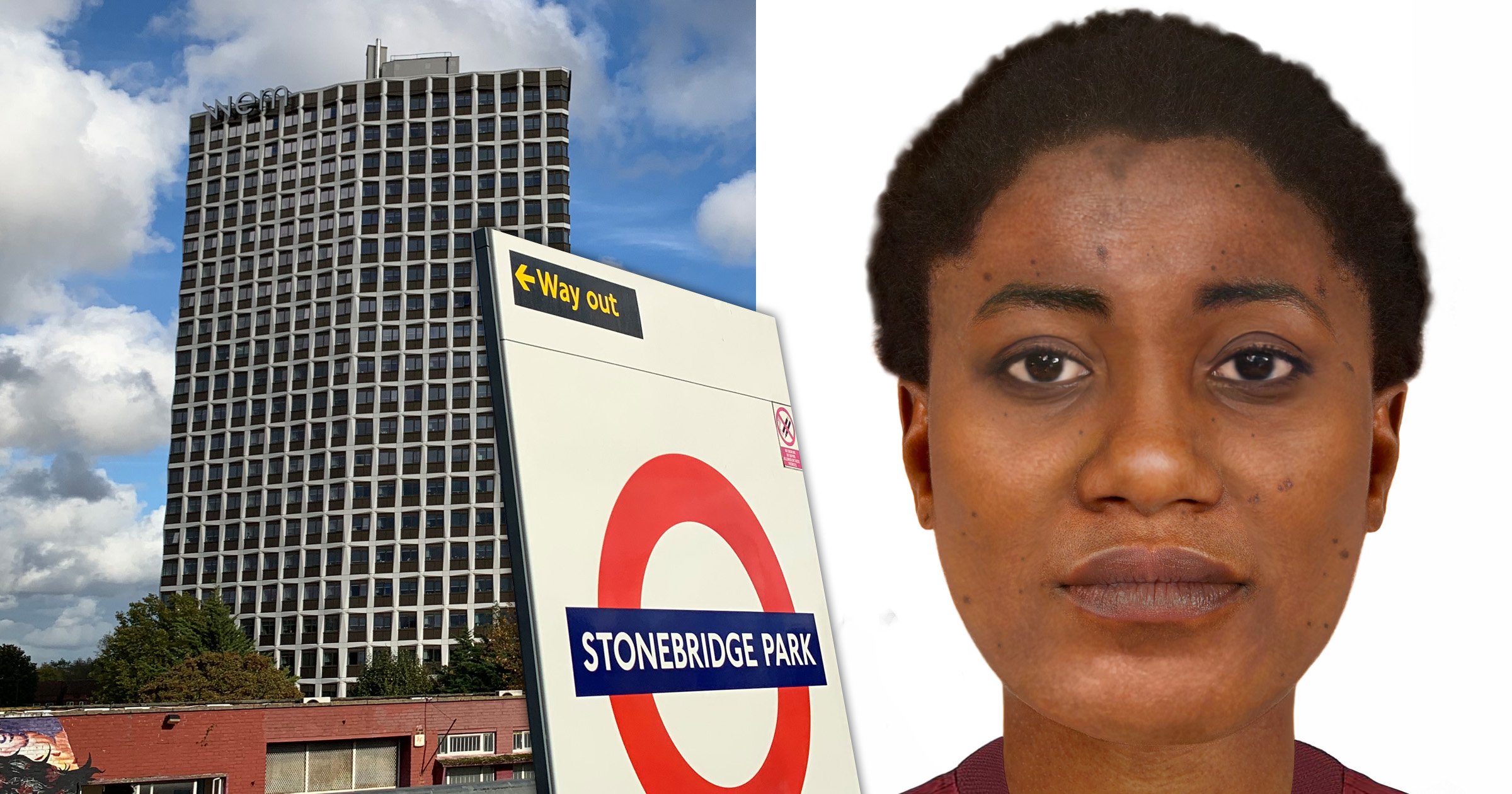 Just after 9am on October 29, 2004, the body of a young woman was found at the foot of a tower block in Wembley, London.

Her identity remains a mystery to this day, despite various clues left behind.

Investigators know the woman had visited a café in the building on the day of her death.

There, she discarded a ‘distinctive’ oil painting which featured two figures and a number of faces, as well as a black carrier bag with the lettering ‘CPNY’.

She also left a used packet of Marlboro cigarettes, a copy of the Guardian and a seven-day bus pass. The latter had been issued at 7.07am on October 26 on Seven Sisters Road.

Despite the various clues left by the stranger, known as the ‘Wembley Point Woman’, police were unable to identify her.

Volunteer cold case investigators from Locate International are now determined to change that.

A new image has been released today that could provide ‘a real chance of breakthrough’ in identifying the ‘Wembley Point Woman’ once and for all.

The picture, created by Scotland-based forensic artist Hew Morrison, was shared to mark the 18th anniversary of her death.

Volunteers are now praying for a major breakthrough.

‘What’s unusual here is that we know the answers to almost all those questions. The only thing we don’t know is who Wembley Point Woman is, or how she came to be at that location at that time.

‘If you have any information that might help – no matter how small – it might be crucial to finally solving this sad case.

‘We know Wembley Point Woman is buried in Carpenders Park Lawn Cemetery, near Watford, in a common grave with no name. We’re confident that you can help us find that name, 18 years on.’

In the years since her death, new witnesses have also come forward to say they encountered the woman on the morning of Friday, October 29 in 2004.

She was seen in the lift of Wembley Point, a triangular office tower in west London now known as the WEM Tower London.

The witnesses said she had appeared distressed.

The woman was later seen in a café on the 21st floor of the tower – the top floor – from where she is believed to have fallen.

Soon after, her body was found in the River Brent at the foot of the tower.

Locate International are now keen to trace anyone who worked in the Wembley Point building at the time, including for companies such as Loot, TNS, Loud and Clear Mental Health Advocacy or the American University in London.

Anyone who worked in HR, who may have noticed absences, have been urged to reach out.

And it’s not just staff, people en-route to nearby gyms or eateries, such as Café 21, may have spotted the woman.

The tower also reportedly used to host art exhibits, with anyone involved urged to get in touch with Locate International.

What clothing was the Wembley Point Woman found wearing?

If you have any information, please contact Locate International by emailing [email protected], by calling 0300 102 1011 or by visiting the appeals page for Wembley Point Woman.