Video posted on social media shows two young men attempting to break down the London shop’s sliding door of the shop with what appears to be a fire extinguisher. Customers can be seen keeping a distance from the door as the attackers temporarily retreat while a member of staff is spotted monitoring the situation while on the phone. One of the attackers then launched a second attempt at taking down the door with a kick before trying to wrench it out with his bare hands as one of the other hoodlums appears to hold his pal back with a hand on his neck.

One customer can be heard talking to a member of staff who appears to be attempting to go near the door, saying: “Right, you don’t get paid enough for that.

Customer Emma Downing compared the thugs to “animals” as she recounted the attack: “I had the misfortune of witnessing the staff get brutally attacked by a large group of young teenage youths, boys and girls, who behaved like a pack of animals.

“They had poles and knuckle dusters for weapons. I’m surprised no one was killed.” 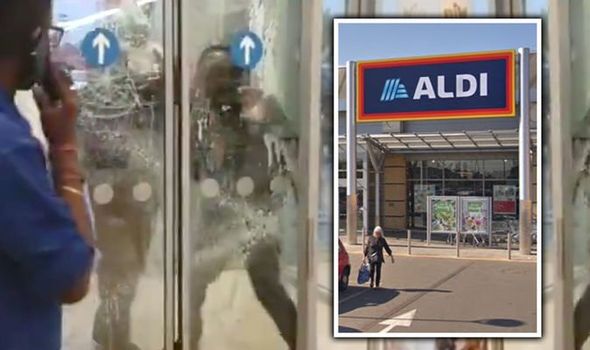 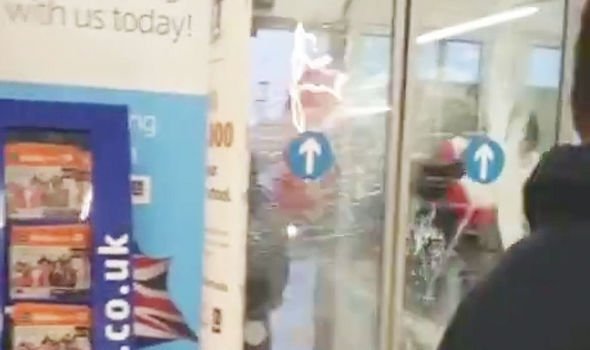 Another witness who was shopping at Aldi when the attack took place said: “There were kids in the store and parents huddled in the corners.”

Heather NeillMc, who was also at the store, told MyLondon: “Three employees had their faces smashed and blood was on the floor.

“Crutches were used as a weapon, a fire extinguisher and anything they could get their hands on”.

The Met Police confirmed they were called into the South Ruislip store on Monday evening because of “a disturbance.” 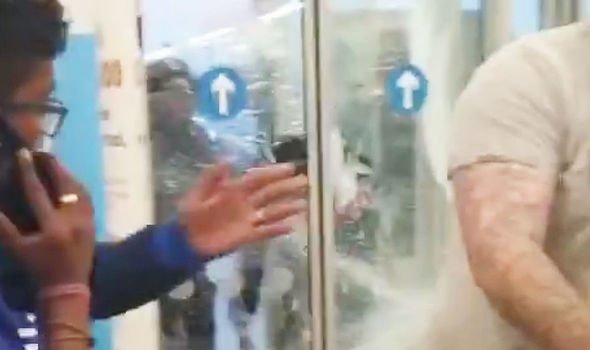 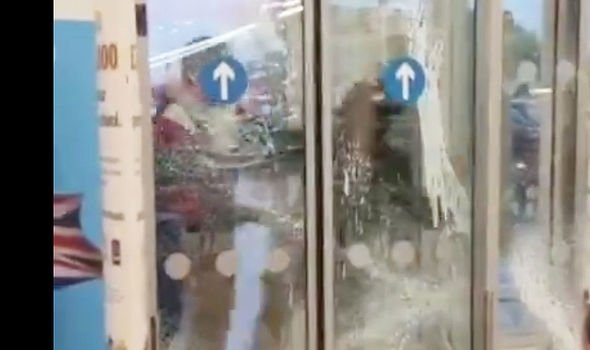 “Multiple youths were involved and a number of items were thrown.”

The spokeswoman said no arrests have been made in relation to the attack.

The incident comes amid an ongoing wave of crime gripping the city which has seen the spike of violent attacks across London over the past two years.

Knife crime rose by 8 percent between April 2018 and March 2019, compared with the previous year.

Home Secretary Priti Patel said she is “absolutely incensed” by Police response to growing crime as she insisted she is planning a widespread crackdown on violent thugs across London and the rest of the country.

The National Crime Agency, which was formed to deal with organised crime, will have its resources increased.

The Home Secretary also pledged to end what she referred to as a “slap on the wrist culture” with mandatory jail sentences for all those caught carrying knives.

Ms Patel said: “I want an end to this slap-on-the-wrist culture for criminals who assault police officers.