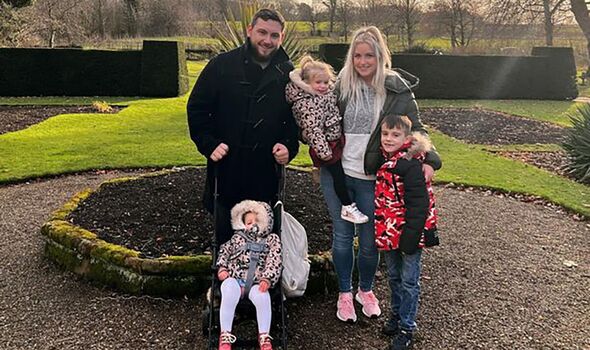 A dad-of-three has told of his sadness after the “enormous blow” of losing his sight to a rare eye condition at the age of just 28.

Callum Kelly struggled to see the TV properly as he watched England play France in the World Cup earlier this month. Days later his condition deteriorated and he can no longer drive or work after being diagnosed with Best Vitelliform Macular Dystrophy (Best Disease).

Recalling the first signs, which happened during England’s loss, Callum said: “I was watching the match, but I couldn’t see the TV properly.”

Just a few days later, Callum woke up and his vision was almost gone. He was later diagnosed with Best Disease.

Callum, who worked operating plant machinery, said: “All of a sudden everything changed. It was just bang, your life blown up. I can’t drive, I can’t do my job and they are telling me what benefits I am entitled to. It has really knocked me for six, it was an enormous blow.”

When Callum was 12, medics confirmed there was something wrong with his eyes, but said it probably wouldn’t affect him until he was in his 50s or 60s, if at all, Teesside Live says.

Callum, from Thornaby-on-Tees, Teesside, had no signs of any issues in his teens or early adulthood.

But now he says he can now only see a blur of colours in his left eye, there is no definition, and his right has about 20 per cent vision at the moment.

“What kills me is knowing I might not be able to see my kids’ faces. I might not see my daughters walk down the aisle or Luca playing football,” the dad added.

“I could just sit and cry for 12 hours a day if I thought it would do any good, but it won’t. I have kids, I just have to get on with things.

“Katie (Callum’s wife) has been my rock. It’s like she has four children to look after now. She is having to do everything, all the running about because I can’t drive. I just keep thinking, what do I do know?”

Callum said he wanted to raise awareness of Best Disease because there is not much information online about it.

Best Disease is an eye condition that affects a tiny part of the retina at the back of the eye, called the macula. It is a type of macular dystrophy, which are inherited eye conditions.

Although neither of Callum’s parents have the disease, his grandfather on his mother’s side, who died when Callum was about five, did have very poor eyesight, which he can only assume was the condition. He said he is now worried in case he has passed it to his children.