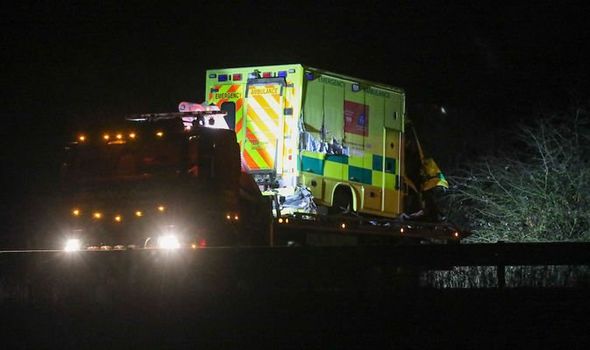 Four people, including two seriously, were injured after the collision on the A21 near Sevenoaks, Kent, at around 8.15pm yesterday. The road remains closed southbound while recovery work takes place.

Southbound queues were initially back to Chipstead, Kent. A diversion, which remains in place this morning, takes motorists through Sevenoaks and Seal on the A25 and then on local roads to rejoin the dual-carriageway at Riverhill, reports Kent Live.

The A21 is usually used as a major commuter route for those heading into the capital as it links with the M25 near Chipstead.

Kent Police have begun an investigation and are looking for witnesses to come forward, especially anyone who may have dashcam footage of the incident.

It’s believed the air ambulance was called out to the scene last night.

A police spokesman said: “Dashcam footage and witnesses are being sought following a collision on the coastbound carriageway of the A21 in Tonbridge.

“Kent Police was called to the scene at 8.16pm on Wednesday 5 January 2022 following a report of a collision involving an ambulance and a cement lorry.

“Four people were injured in the incident, two of them were seriously hurt and the air ambulance was in attendance.

“Officers from the Serious Collision Investigation Unit have commenced an investigation and are asking anyone with dashcam footage prior to the incident to come forward. Anyone who witnessed the collision is also being asked to contact officers.

“If anyone has any information that may assist with the investigation please call 01622 798538 quoting RY/CS/03/22. You can also email [email protected]”