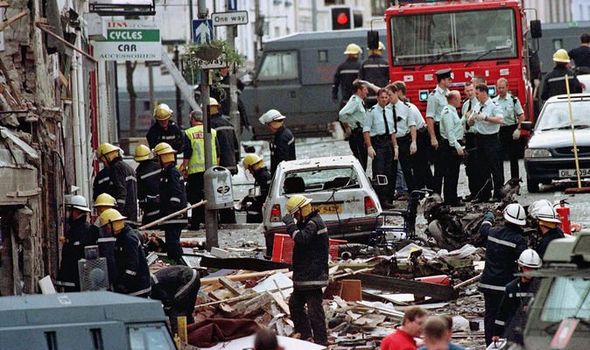 The blast in the County Tyrone town on August 15, 1998, killed 29 people including a woman pregnant with twins. Newly released reports made in the wake of the Real IRA atrocity detail how off-duty staff rushed to the town’s hospital, while the local leisure centre was transformed to house more casualties.

Communications had also been cut off by the bombing, which was disastrous for the vital co-ordination of the emergency services. An introduction to the files, shared by the Public Record Office in Belfast, states that on “a quiet Saturday afternoon in our small market town”, A&E staff “heard the bomb, which was within three-quarters of a mile away”.

It continues: “Within minutes of the bomb going off, scores of casualties began arriving at the Tyrone County Hospital A&E department.

“This is a department that on a busy night might deal with 15 casualties. Suddenly staff were faced with two busloads of bleeding and injured men, women and children, also much more seriously injured people arriving by ambulance.

“In addition to those who came by bus, taxi, car and ambulance, many people walked the distance from the bomb site to the hospital rather than await transportation.

“Those of us who were not present can barely imagine how horrific that scene must have been.”

The Sperrin Lakeland Health and Social Care Trust’s report says Tyrone County Hospital dealt with 209 casualties; the Erne Hospital treated 71, with 23 transferred to the Royal Victoria Hospital; two went to the Ulster Hospital; one to the City Hospital; and 25 to the Altnagelvin Hospital.

Dr Clive Russell, Tyrone County Hospital’s medical director at the time, writes: “The injured had arrived before the major incident plan could be properly activated.

“Many off-duty nurses and doctors, and local GPs, had heard the blast and made the decision to come in…Wave upon wave of casualties were arriving…Staff were confronted with the most horrible injuries affecting all ages, but primarily women and young children.

Politicians visited the hospital in Northern Ireland over the following days. Of one visitor, then-deputy prime minister John

Prescott, Dr Russell adds: “He said ‘when we need you, you never let us down, the NHS never lets us down’. And he was right.”