Rooms for 28 homeless people at the Royal Hotel in Hull had been booked for a two night stay from Christmas Eve until Boxing Day.

Carl Simpson from Raise the Roof Hull homeless project said he told the hotel, owned by budget hotel group Brittania Hotels, who the 14 twin rooms were for and paid £1,092 on 13 December.

Over the weekend the hotel told him the booking was cancelled and they would refund him, but would not give a reason.

“I asked for a reason and was told there isn’t one…but in my eyes this is nothing more than discrimination, especially after we were so open about what it was for,” he wrote on Facebook.

“Our Christmas hotel campaign is now in serious doubt. Being so close to Christmas, we need a miracle.” 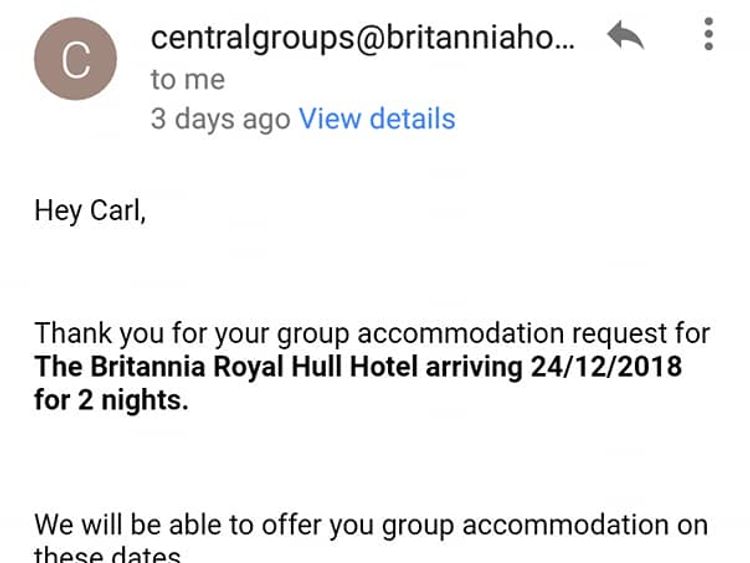 After Mr Simpson, 50, posted the news on Facebook, more than 1,000 people have shared his post and many have asked how they could help, with some offering rooms in their own homes.

Hayley Harrington, a director of the charity, told Sky News when the homeless people were told they no longer had a room for Christmas they were really disappointed.

“For these people, it’s their chance to have a decent bath, have a bed, a good meal and have a bit of normality,” she said.

“Because of the hotel’s discrimination that was taken away.”

Last year Mr Simpson took 24 people off the streets of Hull and paid for them to stay in an Ibis hotel over Christmas.

“After the stay they were so grateful,” he said.

“Some left staff gifts using the very little money they had, and one asked if he could vacuum the rooms to show his appreciation.

“This means the world to homeless people. Last year we had tears of joy from someone who stood on the edge of the Humber Bridge the night before.

“We have to break the news to people that the hotel has been cancelled.”

The charity worker said he wanted to “repeat the success of last Christmas”, and was concerned that could not happen if the money was not refunded in time.

Since revealing the booking was cancelled, hundreds of people have donated money, with nearly £7,600 raised by Monday lunchtime through an online GoFundMe page.

Ms Harrington said she is hoping another hotel they are now in talks with will accept their booking, and any extra money will go towards helping rehabilitate homeless people in Hull.

Brittania Hotels did not answer Sky News’ request for a comment.