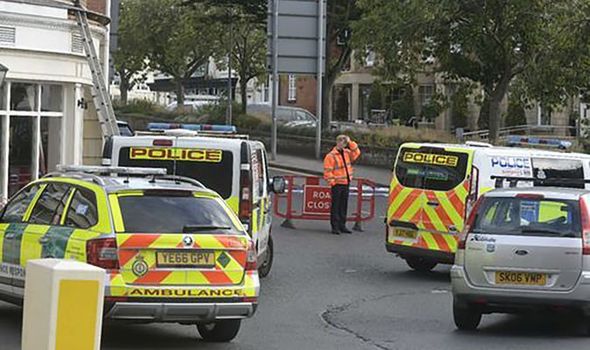 Officers reportedly told guests at The Grand Hotel in Scarborough, North Yorkshire, they had to get out or they’d be “stuck in their rooms all day”. Photos show police vans parked outside the historic hotel, which has 413 rooms and is a stone’s throw from the beach.

One guest told Yorkshire Live: “All the roads are blocked off. We don’t know what’s happened but we were told if we didn’t get out now, we might be in our rooms all day.

“They’re telling everyone to wait by the Royal hotel on the corner. Everybody had to get out; all we’ve been told is that it’s a police incident. They’ve blocked all access near the Grand.”

Police confirmed the accommodation and surrounding buildings have been evacuated due to an “ongoing incident” at the hotel.

A guest at the nearby Travelodge hotel, a one-minute walk from The Grand, said they have also been evacuated from their hotel.

Other guests at Grand Hotel say they heard the fire alarm go off before they were evacuated.

A spokesman for North Yorkshire Police said: “Emergency services are currently in attendance at an ongoing incident at the Grand Hotel in Scarborough.

“The hotel and surrounding buildings have been evacuated as a precautionary measure and the area surrounding the hotel, including St Nicholas Cliff and the Spa Bridge has been cordoned off to allow emergency service to attend.

“Members of the public are advised to avoid the area.”

The accommodation, which is owned by Britannia Hotels, has been contacted for comment.