Queen: Janet from Enfield pays tribute as she queues to see coffin

The stream of people paying their respects did not falter overnight and by yesterday evening it had ebbed and flowed as far as Southwark Park in Bermondsey, well into the city’s south east postcodes. 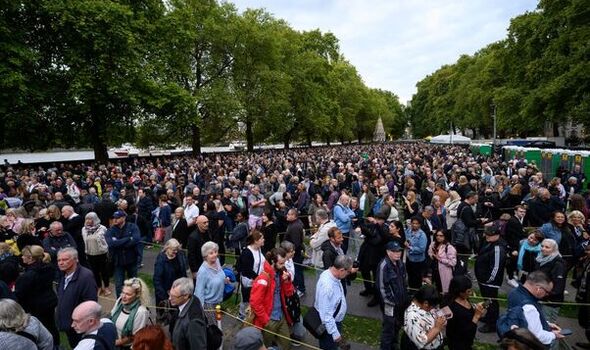 At 7am the back of the queue was at Blackfriars Bridge but built steadily through the day and by 9.30am it had passed beneath London Bridge and on to the river frontage by HMS Belfast.

From there it headed into a large holding pen next to City Hall by Tower Bridge. Hundreds congregated in a tightly-packed pattern separated by crash barriers.

It kept on growing and by midday the ­diligent, good-humoured snake of humanity was lengthening at the rate of 20 metres every minute along Shad Thames.

It was a sight and hubbub to behold. By 4pm the queuing time was estimated to be at least nine hours on the Government’s ­official tracker.

A marshall who asked not to be named welcomed all queue arrivals warmly.

His constant refrain was: “Yes, this is it! You have reached the actual back of the queue. You will be the last people in the queue for a few seconds only, more are right behind you. This way! This way!”

Mourners arriving at the constantly moving point responded with cries of “yes!”, “we’ve made it” and “hallelujah!” as they took their places.

The marshall added: “I’ve been at the back of the queue since 7am and that was at Blackfriars Bridge. I’ve been pretty much walking backwards welcoming people ever since and here we are well past Tower Bridge and it’s still growing.”

Those who arrived reasonably early yesterday made good headway as the queue moved at an encouraging pace.

Some pilgrims were supported on their progress by Justin Welby, the Archbishop of Canterbury, whose London headquarters at Lambeth Palace overlooks the final stages of the long line.

He even performed a blessing on 10-year-old Eva Garcia, whose family have recently moved to the UK from the US. Dad Juan said: “To have a leader of the church pray for your child, I was very emotional.”

Sebastian Cunningham, 13, proudly wore his school uniform as he joined his mum Susannah by HMS Belfast at 9.30am.

She allowed her son to take an unauthorised absence from the Royal Grammar School in Guildford, a decision she hopes they will forgive. Susannah said: “I have been emailing the school to explain. I hope they’ll allow us to take this once in a lifetime opportunity without a detention. We were going to come on Friday but thought the queue would be longer.”

Sebastian, a former chorister at Hampton Court Palace, said: “I decided to wear my school uniform to be smart but also to represent my school. This is an important day and thing to do.” 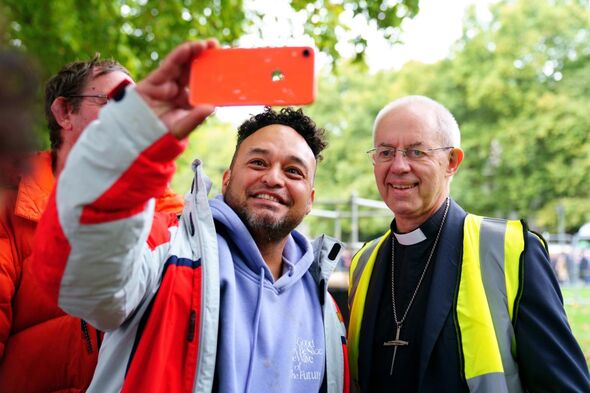 Susannah, wearing a brooch with a miniature portrait of the Queen bought when Her Majesty visited Hampton Court in 2017, was impressed at the line’s brisk pace.

She said: “It’s been brilliantly organised. We are moving quickly, which is encouraging.” After an hour they passed the ­replica of Sir Francis Drake’s flagship the Golden Hind and after three hours were at Lambeth Bridge.

Dancers Glenn Smith, 40, and Emma Callow, 43, travelled from Canterbury to join at London Bridge at 9.27am.

Air traffic controller Glenn and nursery school teacher Emma decided to attend after they took part in the Platinum Jubilee ­procession, dancing in the 1950s jive and swing section.

Glenn said: “We danced up the Mall and arrived in front of the Palace just at the time the Queen came on to the balcony. It was a magical moment and we wanted to honour her memory by coming along.”

Glenn, in a 1940s vintage suit, and Emma wore genuine Coronation badges from 1953 which they had dressed with black ribbon.

Emma added: “We had such a fantastic time dancing at the jubilee. We really wanted to come and pay our respects.” Retired ­soldier Michael Jones, 67, and his wife Clare, 54, travelled from their home on the Isle of Wight, leaving at 5am to catch the ferry and then train to Waterloo. 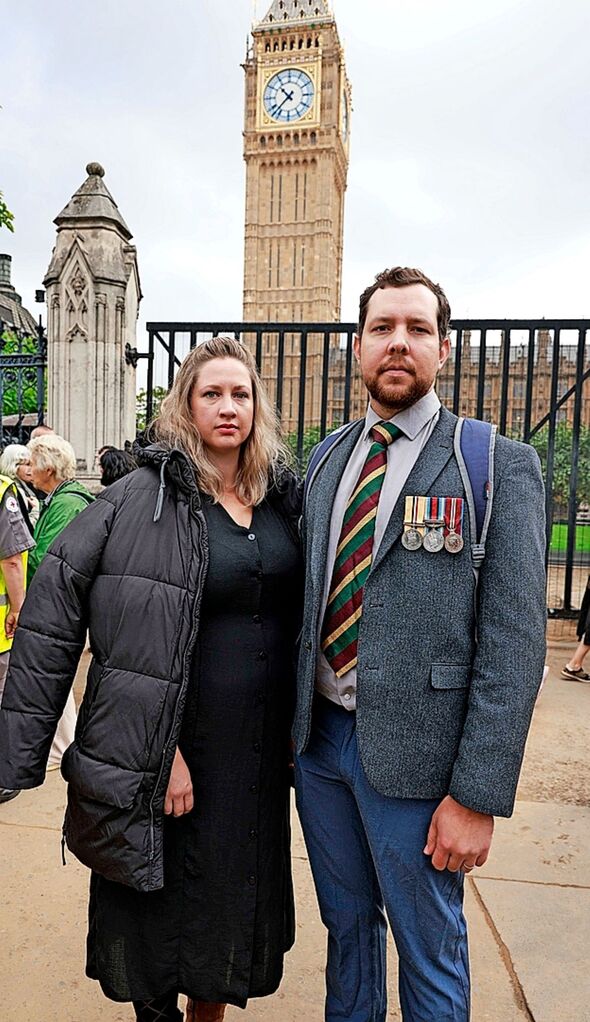 Michael said: “I joined the Army as a boy to serve the Queen and she turned me into a man. She sent me around the world and I had a 20-year career, which I will never forget.”

The dad of four served with the Grenadier Guards and Royal Artillery and was a commanding officer’s bodyguard and PT instructor before leaving the Army in 1989.

He added: “We’ve come by boat and train but got off at the wrong end of the queue. We walked its length more or less and found the back at about 10am by HMS Belfast.

“It’s important for me to come and thank the Queen in person for the service she gave this country. Standing for a few hours in a queue is nothing in comparison.”

At Westminster Hall the coffin is guarded around the clock by units from the Sovereign’s Bodyguard, the Household Division and the Yeoman Warders of the Tower of London.

Former prime minister Theresa May and her husband Philip were among those ­paying their respects yesterday. The queue is being managed by more than 1,000 volunteers, stewards and police officers.

People waiting in line were issued with pink and purple numbered wristbands, replacing the original yellow issued on Wednesday. More than 1.7 million people have gone online to view the live queue tracker showing the end of the line.

The Department for Digital, Culture, Media and Sport (DCMS) launched the stream on YouTube as the first mourners were allowed to enter Westminster Hall.

The video features a live map with the queue route marked in purple, alongside information on the length of the queue and the nearest London landmark to the back.

The wait time could increase to 30 hours over the weekend, depending on numbers.

The DCMS expects to close the queue to new joiners at “sometime on Sunday” to ensure all those lining up can see the Queen lying in state before it ends at 6.30am on Monday ahead of the state funeral.

The capital’s transport networks are expected to be crammed with well-wishers.

Nearly 115,000 more Tube journeys were made to or from eight stations in the centre of the capital on Wednesday compared with the same day last week. Transport for London said: “Use our travel tools to check your journey before you travel.”

About 1,500 military personnel are assisting with crowd control and 600 members of St John Ambulance will be on first aid duty.