“Anti-racist work. It’s extra-curricular work that white students don’t have to do. It’s exhausting!” says Melz Owusu, a PHD student at the University of Cambridge.

Despite getting into one of the UK’s top universities, Melz doesn’t feel accepted, and says being black is part of the problem.

“I don’t feel like I belong here. I’ve been here for about two months and I haven’t felt a sense of belonging,” he said. 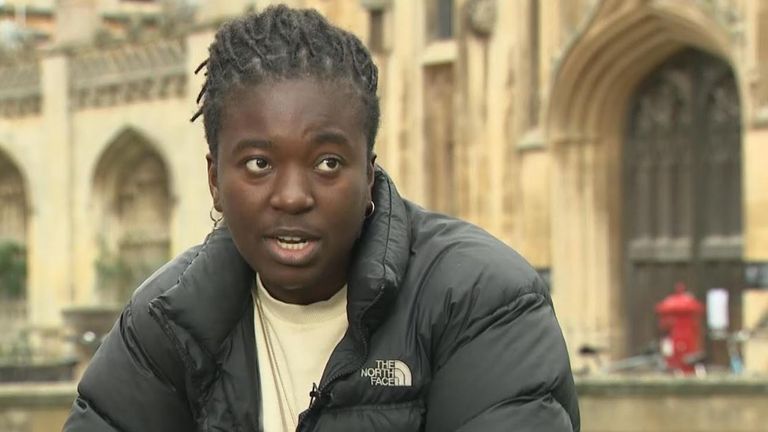 I’ve come to meet Melz because I’m trying to understand two things that are happening in our education system that can be attributed to race.

Statistics show that poor white students do worse at school, while black students from any income bracket fall behind on their grades at university.

Melz believes that as you move up the education ladder it becomes more racist.

His first degree was at Leeds University and he said the curriculum is a problem.

“I studied philosophy and politics as my first degree, and in my entire three years studying, I never once read somebody that wasn’t white in the philosophy side of my degree.

“I’d flick a page and they’re saying black people are less than human, like literally. If I’m reading Kant in philosophy, like Kant’s in every single philosophy degree across the country, all you have to do is flick a page and you’ll be met with ideas about yourself, about your humanity that are fundamentally harmful.

“And it’s never challenged within the classroom.”

The same arguments are made about science, English and especially colonialism in history. 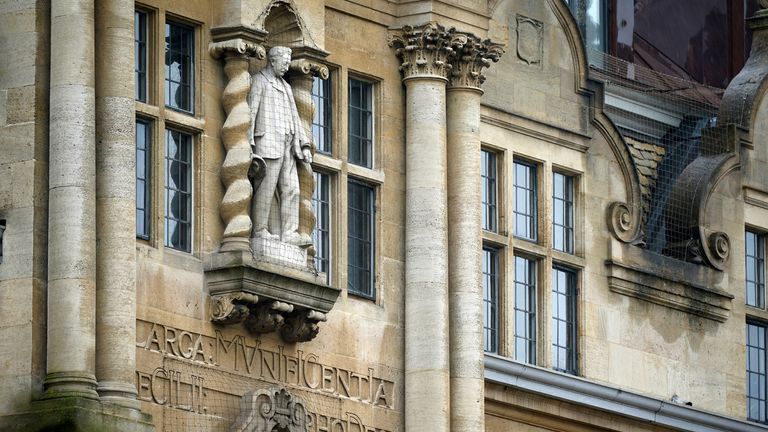 The Black Lives Matter movement in Oxford is still campaigning to remove the statue of British imperialist Cecil Rhodes at Oriel College.

They say the 19th Century businessman and politician in southern Africa represented white supremacy and is steeped in colonialism and racism.

It’s argued this is also a problem with the modern-day curriculum in many subjects.

But the complexity begins earlier.

To simplify things, I’ve decided to compare just two ethnic groups through the course of their education: white British and people of African origin.

But when they reach the 7-11 age group, black African children have overtaken them and by the time they do GCSEs their results are also better.

Once we get to A-levels, things start to change.

White students’ results are five percentage points higher in the number of people getting at least 3 As. They achieve higher average grades overall and when they get to university that difference widens to almost seven points, with white students achieving better results – more firsts and a higher proportion of 2:1 degrees.

Five years after graduating, white people are on higher average wages and more likely than people of African origin to be in sustained employment or further education. Again, it is around a seven-point deficit. 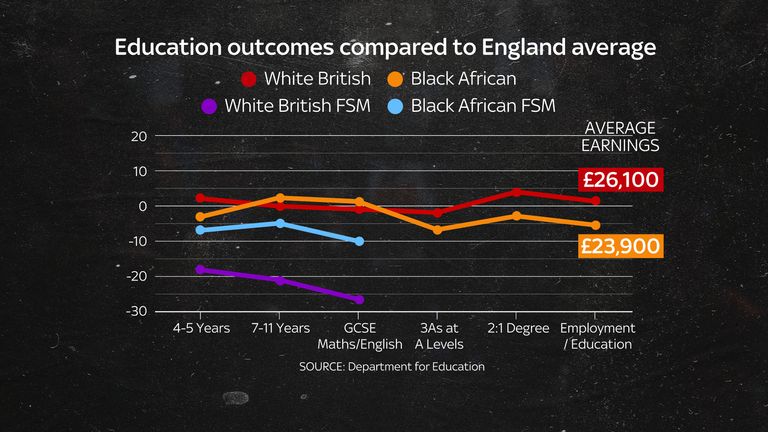 So the data suggests there is a tipping point after GCSEs where the tide turns against black African people who stay in education but end up in lower paid jobs.

Halima Begum, director of the Runnymede Trust think tank, said: “Imagine the signal that’s giving to a young black person, that you may do better than your counterparts, but actually you’re not going to end up with the same jobs.”

Ms Begum said factors such as having a foreign-sounding name on your CV can impact people’s chances of securing a job interview.

But data suggests some white students are also at a disadvantage.

Let’s go back and look within those two groups at low-income households – those who qualify for free school meals.

At GCSE level, the difference is 17 points for those achieving a good pass in maths and English, with just 17% of white children from low-income families getting a grade 5 or higher, compared to 34% for poor children of African origin. 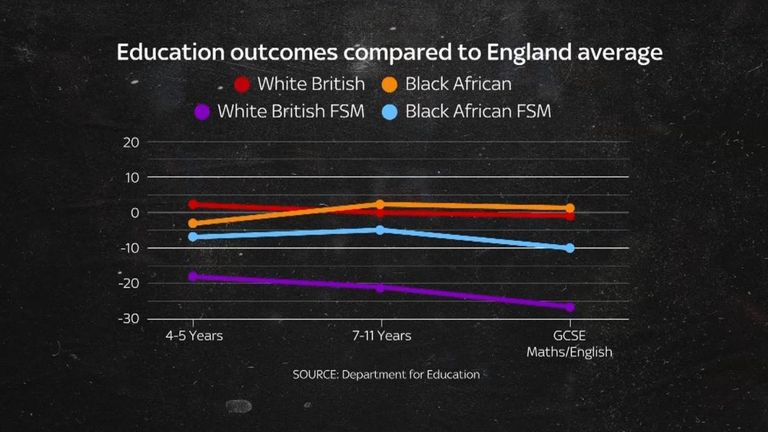 Poor white students are least likely of any group to go to university. So what’s going on?

Dr Phil Smith is the executive principle at the Outwood Grange Academies Trust in Worksop, catering for one of the most deprived areas of the country – which is mostly white working class.

The town was dependent on the timber and mining industries and went into decline in the 1990s when the pits closed.

Children drank alcohol and smoked in school and the prospect of getting an education or going to university was alien.

Only around 20% of students passed GCSEs in maths and English.

“When I first arrived [at the school] and I talked to some students about where they could go and the jobs they could do, they would look at me and say ‘well why would I want to work?'” Dr Smith said.

With female students, the situation had another dimension.

“A lot of students, their career plan was to get pregnant, and stay at home on income support,” he said.

“They’d tell us outright. I don’t need school. I’m going to be like my mother, I’m going to get pregnant, gonna have three children, and I’ll get a house.”

In five years, Dr Smith turned the school around from being in special measures to being in the top 10 schools in England for student progression.

But he met resistance as the sheer lack of ambition seemed to be ingrained in students from their parents.

“There was a time when a lot of families were vocal against what we were doing,” he said.

The school still has an upward battle.

I interviewed three children from Year 7, Year 9 and Year 10, who all came from broken homes and all aspired to be footballers.

In the sixth form college, I met 18-year-old Fenton Killen, who hopes to be the first in his family to go to university. 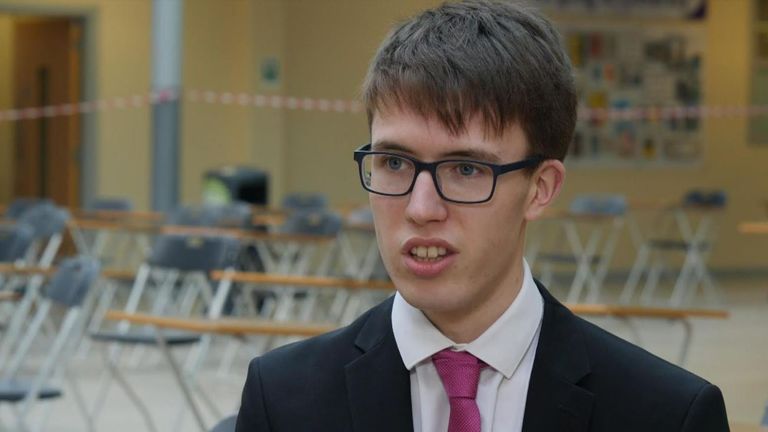 He believes one reason why poor white kids don’t do well at school is because white, working class towns don’t have the investment of more multicultural inner cities like London.

“I think it’s mainly just the lack of funding we get,” Fenton said.

“Naturally in London the cost of living’s higher, they’ve got a lot more money in general, you get that sort of North-South divide and the North has got very little in terms of resource. We sort of make do with what we’ve got.”

He also explained that many children are expected to follow in their father’s footsteps, often becoming bakers, butchers or coal miners.

Halima Begum refers to this too.

“We need to think about the ceiling that is around class as well as the ethnicity ceiling and that’s not a conversation we’ve had so far,” she said.

“People are really shy to use the ‘c’ word – they even talk about socio-economic factors, but let’s talk about class.

“It’s there, it’s inherent. Let’s talk about race. And actually, both of these factors compound the life chances of our young people at the moment.”

Back in Cambridge, I asked Melz if those white children from poor backgrounds still had white privilege, and if so, what was it?

“Whiteness! Whiteness in its essence,” he replied.

“So if a white student was to go into that seminar, talk about Kant, they’re not going to have that same visceral, painful experience that a black student would have.”

Nobody has all the answers but the data tells a clear story of poor white children in depressed communities who bump along the bottom throughout school life and beyond, while black children from all backgrounds hit barriers post-GCSEs.

These imbalances are something we should talk about.

As Ms Begum says: “2020 is the year that we all spent watching George Floyd get murdered on television, and if we cannot get to a conversation about class and race in 2020, when are we ever going to get there?”