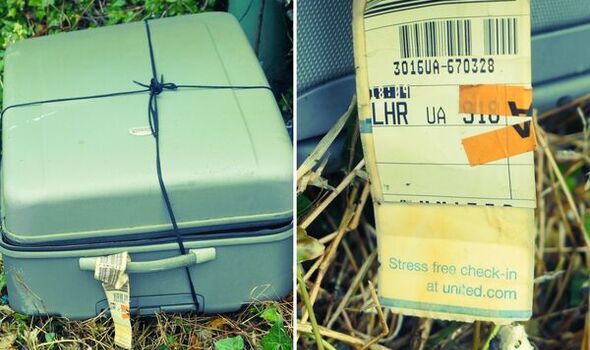 The mystery suitcase was found by Paul Bliss who posted the images of the suitcase in Facebook group Beautiful Barry. The images showed a green suitcase with a string attached and a luggage tag for United Airlines.

Mr Bliss found the suitcase near the underpass at Barry Dock Station, with the luggage tag indicating the flight was bound for Heathrow from Washington.
But somehow the suitcase ended up in Barry, Wales.

Posting on Facebook, Paul Bliss wrote: “This suitcase has either fallen from the sky or been dumped by someone near the underpass at Barry Dock Station.
“The ticket is United Airlines No UA918 from Washington to Heathrow.

“Maybe the passenger would like to get down to the station and collect their luggage.”

The post received a mixed reaction online, with some finding the discovery “worrying” as others jokes about the situation.

One user commented: “Don’t open it. Years ago someone found a holdall bag by the canal up here in Newbridge. They had a look inside and it was horrific, screwed them up for life. I won’t say what was in it so as not to trigger anyone.”

Another commented: “Why would you put it on social media for anyone to go and grab it before ringing the police to collect it… If it’s been dumped pretty obvious the owner doesn’t know it’s there.”

One person said the suitcase could not have fallen from the aircraft and suggested “it’s been taken by mistake”.

Owen Williams wrote on Twitter: “What in God’s name is luggage from a transatlantic united flight from Washington Dulles International, Virginia to London, England, doing under a bridge in Barry, Wales? How does this happen?”