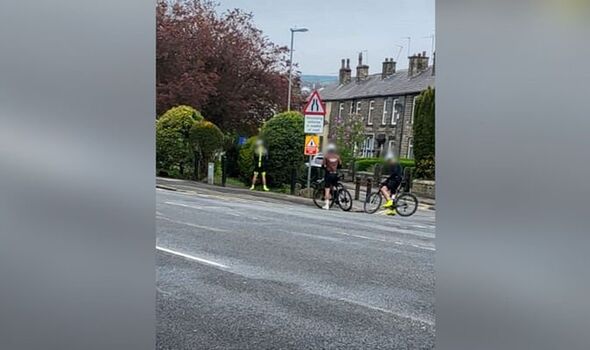 The incident took place on May 1st at around 11:30am in Norden, Rochdale – the same day in which hundreds of cyclists passed through the village on the Tour de Manc. The event saw participants undertake a variety of different cycling routes across the Greater Manchester area.

But organisers have stressed that the man was not involved in the event.

Following an investigation, the rider was identified and reported to the local authorities, reports Manchester Evening News.

Eyewitness and Norden resident, Elliott Marsland was walking home when he saw the man urinating in the Memorial Garden on Edenfield Road.

Elliott, 45, said: “I am in training at the moment for the Manchester 10K and I had just come back from a 10k run.

“I was walking back through the village of Norden and I noticed loads of cyclists because it was the Tour de Manc that day.

“As I was walking past the memorial gardens, I saw three guys there, one who was doing something he shouldn’t have been doing. I just thought, how horrific and how disrespectful is that?

“Especially to do it in a village, in daylight, in the middle of the day, is one thing, but in a memorial garden to commemorate the war dead? It’s awful.

“So I took a photograph and I shouted across to them, but they just ignored me, which angered me a bit.”

Elliott spoke of the importance of the memorial gardens, he said: “It’s a very special memorial, we take it very seriously in Norden. A lot of us have got family that died in the war.

“The memorial is a very emotive subject. This is a memorial space to commemorate the fallen. It should be kept that way and not be vandalised. I have never seen anything like this in Norden before.

“You might get the odd drunk on a Saturday night, but not in the memorial space. It’s almost sacred, if you like.”

After sharing the photo on a local Facebook group, Elliott received many comments from people who were outraged by the incident.

One person commented: “How disgusting.”

Another person wrote: “He needs reporting to the police.”

Elliott explained: “I don’t normally post things like that on Facebook, but my photo has really gathered momentum. There’s been a lot of upset and disgust.

“Even our local councillor got involved. I’m glad that other locals thought the same as I did.”

Elliot said the incident made him feel concerned about people who take part in public events like the Tour de Manc without actually registering for them.

He added: “I do a lot of running and you normally have to pay an entry fee for marathons and things like the Tour de Manc, because the entry fee isn’t just for admin costs – it goes to charity.

“I saw there were other cyclists, who were just turning in at the junction to go down towards Norden Primary School. They had the official numbers on them, so they were registered riders.

“This man obviously hadn’t paid and didn’t have a number, so that’s why he couldn’t use the pitstop at the primary school.

“So he has taken it as a freebie and was caught with his pants down, literally. I think this is going to be raised again when the Tour de Manc runs next year.

“There’s always a minority who ruins it for the many. This shouldn’t detract from the wonderful 99% of participants in the Tour de Manc who have done their jobs and raised their money.”

Peter Winkler, Conservative Councillor for Norden, said: “I was naturally disappointed that a cyclist, indeed anyone, had been spotted urinating in Norden ’s memorial garden, not least because I was hosting a Tour de Manc Pit Stop just a short distance away that provided toilet facilities.

“Norden is a friendly place and there are several pubs that I am sure would have welcomed a cyclist ‘caught short’.

“Whilst the actions of this person were at best misjudged, it is important that we be clear that he was not a registered participant in the Tour de Manc.”

The Councillor also praised Tour de Manc for their handling of the incident, adding: “The organisers from Tour de Manc were as upset as anyone and have been extremely helpful in identifying the rider through event photography and their connections to the cycling community.

“The event is an incredible culmination of the effort and generosity of many people and does an amazing job of raising money for local charities and good causes.

“The riders are always well briefed and extremely grateful for our hospitality, and we are looking forward to welcoming them back again next year.”

Tony Rubins, Tour de Manc Co-organiser, said: “We at Tour de Manc were upset to hear that this had happened. We launched an investigation and found photos of these riders.

“They had no Tour de Manc rider numbers. We reached out to our rider community and the offending rider was identified.

“As we believe an offence may have been committed, we passed on the rider details to the local authorities.

“We are always delighted to have the support of the Norden Community and we warn our riders to be courteous and obey the law.