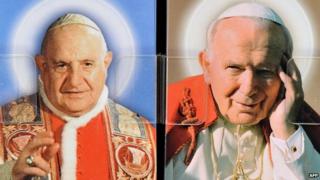 Pope John Paul II and Pope John XXIII are to be declared saints by the Catholic Church. The BBC looks at the steps required for an individual to become a saint in the eyes of the Vatican.

The process to make someone a saint cannot normally start until at least five years after their death.

This is to allow time for emotions following the death to calm down, and to ensure that the individual’s case can be evaluated objectively.

Some have to wait a long time before they reach Catholic sainthood. Saint Bede, the theologian, died in 735 but had to wait 1,164 years before he was declared a saint.

The waiting period can, however, be waived by the Pope. Pope Benedict XVI set aside the waiting period for his predecessor, John Paul II, in 2005. This was thought to reflect the overwhelming hierarchical support John Paul II enjoyed, and the popular grassroots conviction that he was a holy man.

John Paul II had also dispensed with the five-year period for Mother Teresa, beginning the process in 1999, less than two years after her death.

Once the five years are up, or a waiver is granted, the bishop of the diocese where the person died can open an investigation into the life of the individual, to see whether they lived their lives with sufficient holiness and virtue to be considered for sainthood.

Other religious groups in the diocese can also ask the bishop to open the investigation.

Evidence is gathered on the persons’ life and deeds, including witness testimonies.

If there is sufficient evidence, the bishop asks the Congregation for the Causes of Saints, the department that makes recommendations to the Pope on saints, for permission to open the case.

Once the case is accepted for consideration, the individual can be called a “servant of God”.

Step three: Show proof of a life of ‘heroic virtue’

The Congregation for the Causes of Saints scrutinises the evidence of the candidate’s holiness, work and signs that people have been drawn to prayer through their example.

If the Congregation approves the case, it is passed to the Pope.

If the Pope decides that the person lived a life of “heroic virtue”, they can then be called “venerable”.

Popes who have been bestowed the title of “venerable” include Paul VI and Pius XII.

Other venerable individuals include Irish nun Catherine McAuley, who founded the Sisters of Mercy congregation, and Scottish nun Margaret Sinclair.

To reach the next stage, beatification, a miracle needs to be attributed to prayers made to the individual after their death.

The prayers being granted are seen as proof that the individual is already in heaven, and hence able to intercede with God on others’ behalf.

Incidents need to be “verified” by evidence before they are accepted as miracles.

In the case of John Paul II, Vatican experts examined the medical evidence for an allegedly miraculous cure from Parkinson’s Disease of a 49-year-old French nun, Sister Marie Simon-Pierre Normand. Sister Marie said that she and her fellow nuns prayed for the intercession of Pope John Paul II after his death. Her sudden cure had no logical medical explanation, the Vatican says.

After beatification, the candidate is given the title “blessed”.

There is one exception to the miracle requirement – a martyr, someone who died for their faith, can be beatified without a verified miracle.

Canonisation is the final step in declaring a deceased person a saint. To reach this stage, a second miracle normally needs to be attributed to prayers made to the candidate after they have been beatified.

Martyrs, however, only need one verified miracle to become a saint.

The second miracle in John Paul’s case was the reported “inexplicable recovery” of Costa Rican woman Floribeth Mora from a serious brain illness, which was attributed to John Paul II’s intercession.

Pope Francis took the unusual step of waiving the requirement of a second miracle in the case of John XXIII. This was said to be because of the widespread support for John XXIII’s canonisation, and the large number of miracles attributed to him.

During the canonisation ceremony, the Pope conducts a special Mass, reading aloud the individual’s life history and then chanting a prayer in Latin that declares the person a saint.

Modern canonisation ceremonies can attract huge audiences. Hundreds of thousands of pilgrims are expected to attend Sunday’s canonisation. The Vatican says more than 2,500 volunteers will be on hand to distribute four million free water bottles and 150,000 service booklets.

The Mass will be broadcast live on 17 video screens around the city. The Vatican has also released two official mobile phone apps on John Paul II and John XXIII.