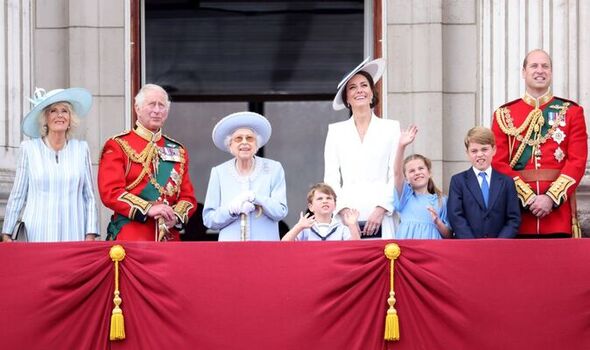 Her Majesty’s remark to a teary Prince Charles captured her joy at seeing tens of thousands gathered in front of Buckingham Palace to commemorate the Platinum Jubilee. The monarch, alongside four generations of her family, appeared genuinely moved by the outpouring of admiration and gratitude.

An overwhelmed Prince Charles replied, “It really is the most wonderful sight,” as the crowds marvelled at a spectacular flypast of 70 iconic aircraft.

Wearing sunglasses and leaning on a walking stick presented to her by the Army as a Jubilee gift, the 96-year-old monarch took in the breathtaking view of The Mall twice.

The first time was to take the salute as soldiers returned from Trooping the Colour.

The second time was to watch the flypast, along with other working members of her family.

Little Prince Louis, who was witnessing his first grand occasion at the age of just four, threatened to steal some of the Queen’s thunder by pulling funny faces and chatting animatedly to his great-grandmother, who stood next to him.

At one point he tried to walk in front of the Queen but was gently held back by his mum.

After the Queen pointed out the smoke from the Red Arrows to Louis, he asked if she’d seen the planes and she replied: “Have you seen what? Ah, the jets!”

Then she told him, “Let’s go, it’s finished now. That really was wonderful, so incredible.”

The Queen also said to the crowd, “Thank you very much,” before going inside for lunch with her wider family.

Later she took part in the lighting of a beacon at Windsor Castle – one of 3,500 across the UK and Commonwealth.

Her Majesty, who is the first British monarch to reign for 70 years, looked relaxed and joyful throughout the day. But although aides said she “greatly enjoyed” it, it did take its toll.

Last night Buckingham Palace announced she had decided to pull out of this morning’s national service of thanksgiving for her reign at St Paul’s Cathedral after experiencing discomfort.

Palace officials suggested the prospect of a journey into central London from Windsor and the physical demands of walking around the cathedral were the deciding factors.

In a statement the Palace said: “The Queen greatly enjoyed today’s birthday parade and flypast but did experience some discomfort.”

Officials are now reviewing which events the Queen will attend during the remaining three days of Jubilee celebrations – but have said all along that it is likely to depend on her mobility problems.

Last night organisers of the Trooping the Colour on Horse Guards Parade revealed they had been told to keep guests there because The Mall and St James’s Park were full to their capacity of 1.5 million people.

The Queen, wearing a Guards brooch and the Angela Kelly outfit she chose for her official Jubilee portrait, first emerged on to the balcony with her cousin the Duke of Kent, 86.

She beamed as she took the salute from the troops of the Household Division returning from the parade.

Twelve protestors from the vegan group Animal Rebellion were arrested near Buckingham Palace after vaulting fences and diving in front of marching troops.

A Met Police spokesman said: “Today we have made 12 arrests for obstruction of the highway.”

Earlier, crowds lining The Mall had been treated to the sight of George, Charlotte and Louis in their first carriage procession.

They travelled with mum Kate and step-grandmother Camilla, with other royals following. As the spectators waved at the children, they waved back, especially Louis, who was very energetic.

At one point his seven-year-old sister Charlotte briefly held his hands down and appeared to tell him not to wave so much.

The children and their mum were among the guests who watched Trooping the Colour at Horse Guards from inside the Duke of Wellington’s former office, overlooking the parade ground.

They joined more than 30 royals including all of the Queen’s grandchildren to watch the military parade. Shortly afterwards 17 royals joined the Queen on the Buckingham Palace balcony to watch the six-minute flypast, with Prince Charles, the Duchess of Cornwall, the Duke and Duchess of Cambridge and their three children flanking the monarch.

The Queen was also joined by the Duke and Duchess of Gloucester, Princess Alexandra, the Duke of Kent, Vice Admiral Sir Tim Laurence, Princess Anne, the Earl and Countess of Wessex and their children Viscount Severn and Lady Louise Windsor.

There was no place for Harry and Meghan after the Queen decided to limit it to working members of her family and some of their children.

The aircraft included 15 RAF typhoons, which flew in the formation of the number 70, prompting broad smiles from the Queen.

There were also artillery gun salutes in London, across the UK and from Royal Navy ships at sea.

Former US president Barack Obama sent a video message to the Queen, saying: “Your life has been a gift, not just for the United Kingdom but for the world.

“And it is with gratitude for your leadership and the kindness that you’ve shown me and my family that I say, may the light of your crown continue to reign supreme.”

Nurse Ian Higgins, 62, who watched the events in central London, said: “It was lovely, everything we hoped it would be. We’re a bit older now, so we were here for the 25th and then the 50th (jubilee). But this was the best one.”