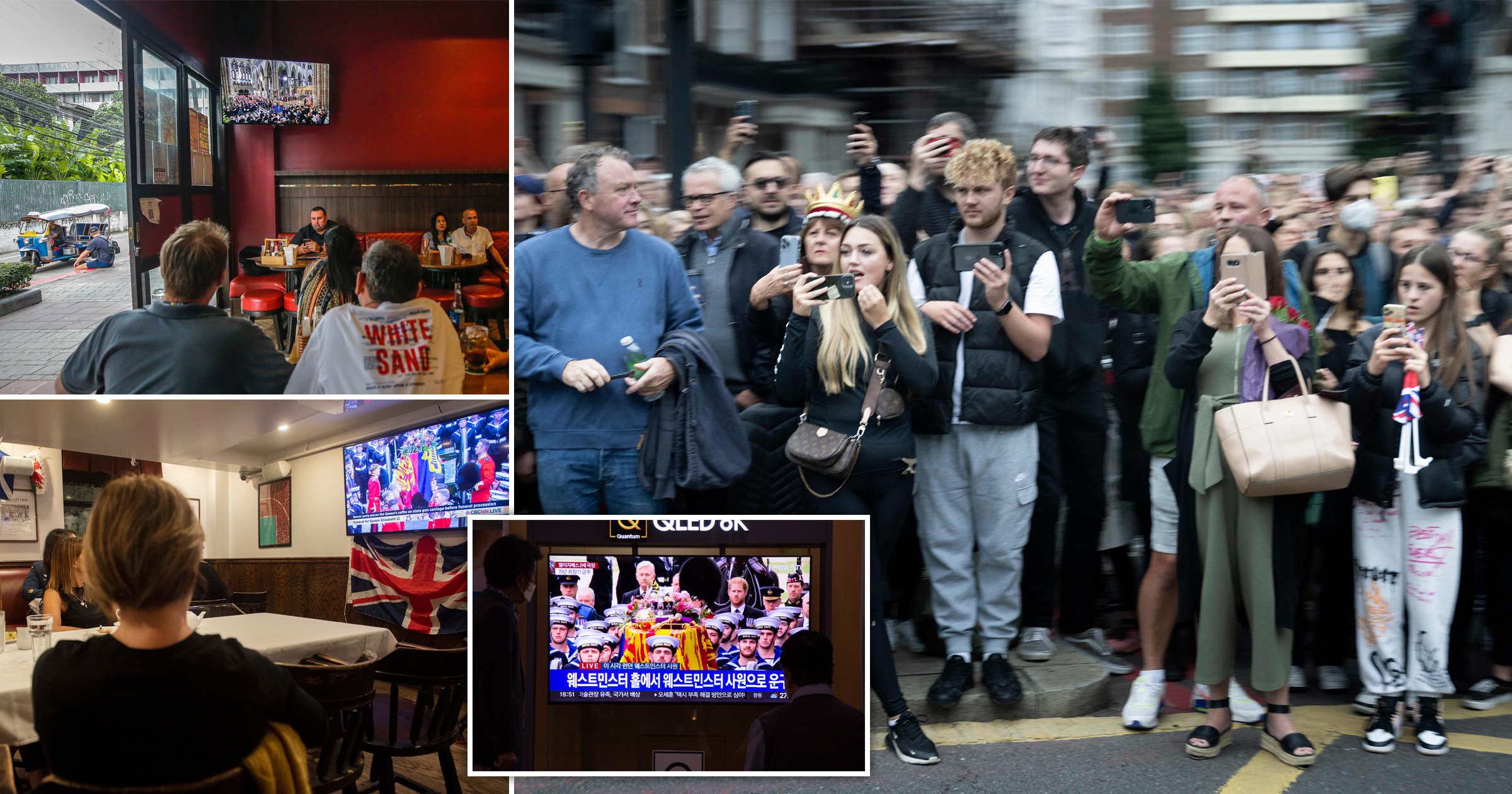 Eyes were glued to television screens across the world today as the state funeral of Queen Elizabeth unfolded.

From Sydney to Seoul and from Bangkok to Belfast, millions observed as a chapter in the history of the British monarchy came to a close.

Big screens were erected in major cities so people could watch the funeral together. And cafes, pubs and restaurants around the world broadcast live news footage from London.

In Sydney, the 11am funeral took place at 8pm local time. People took to local drinking spots to observe the funeral as darkness fell outside.

Churches held special services and bells tolled from the likes of St Andrew’s Cathedral to coincide with the ceremony thousands of miles away in London.

Meanwhile in the Australian capital of Canberra, royal fans came together to watch the funeral on a big screen ahead of a national memorial service.

Images also show people in France, Thailand and South Korea pausing from their coffees and their cocktails – and taking a moment to look up at computer screens.

Closer to home, people also came together among friends and family to watch the funeral.

In Belfast, a large gathering saw veterans with polished medals come together with tourists perched on suitcases.

Some dressed in suits and black ties, others in T-shirts and jeans.

Sat outside Belfast City Hall, attendees said the day had been a ‘fitting tribute’ to the Queen.

Meanwhile in Edinburgh, hundreds gathered in the capital to watch the service.

A big screen had been set up just metres from the Palace of Holyroodhouse – the royal family’s official residence in Scotland.

Emilia Wolfbauer, an 18-year-old student originally from Austria, said the response to the service in the park gave her ‘goosebumps’.

Staff and students at the King’s former school have come together to mark the Queen’s state funeral.

Gordonstoun school, in Morayshire, suspended lessons on Monday to allow boarding houses to gather and watch the funeral broadcast.

The houses were silent as the Queen’s coffin made its way to Westminster Abbey, with some staff and students admitted they felt some emotion towards the occasion.

The Queen had a close connection to Gordonstoun, with her husband, the late Duke of Edinburgh, studying there in his youth.

Their three sons: Charles, Andrew and Edward followed in his footsteps – an education that Charles said instilled in him self-discipline and a sense of responsibility.

The Princess Royal’s two children, Zara and Peter, were also students at the independent school.

Lisa Kerr, the school’s principal, said it was a ‘remarkable’ day for the Gordonstoun community ‘in so many ways’.

She added: ‘Most importantly, it is our opportunity with the rest of the country to pay our respects to a much-loved and respected monarch.