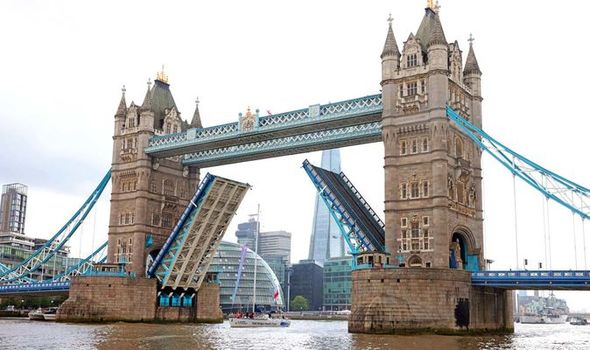 Some youngsters have physical, mental or learning disabilities. Others have been exploited, some are carers while many have been excluded from mainstream education and are involved in crime. In other cases the charity has been a lifeline to young victims of physical or mental abuse.

The charity says young people have been hit by unprecedented disruption to their education, feelings of isolation and harm to their mental and physical health.

Last night, at a gala reception, Vivienne Cox, chairwoman of the charity’s LifeChanger Appeal Committee, said: “It’s widely accepted young people from disadvantaged backgrounds lack the same opportunities and life chances as their more affluent peers. This has been further exacerbated by the pandemic.

“Mental health referrals have doubled since the start of the pandemic, and recent reports of nearly 200,000 being referred in just three months only shows the problem is getting worse.

“We know a week-long voyage on one of our vessels, with support from our experienced youth development sailing team, gives these young people the opportunity to change their lives.”

This week three vulnerable youngsters aged 14 and 15 embarked on a life-changing, albeit choppy, voyage from Portsmouth to London, aboard charity vessel Challenger 2.

The brave trio navigated 190 miles of treacherous water, each taking it turns to put in three-hour shifts around the clock, braving Force 9 gales and the busiest shipping lane in the world.

The smiles on their faces as they finally reached dry land was testament to the work the charity does.

Trustee Emma Bradshaw said: “They are all equal on the boat and it shows them only they set limits to what they can achieve. The one thing they all get out of it is resilience, and that’s priceless.”

Young seafarers are responsible for every aspect of life on board, from cooking and cleaning to steering race yachts and learning navigation in unforgiving waters.

Katie Craven, 18, who was once homeless but found salvation on the open water, said:”My first voyage opened my eyes and showed me I can do better.”

Duran Duran’s Simon Le Bon, 62 – one of the charity’s ambassadors – said: “Being at sea gives you a sense of freedom and independence that is hard to find anywhere else. It lets these kids just be kids in the fresh air. It’s a wonderful thing.”

The charity has taken more than 500 young people on voyages since restrictions were eased in June, but demand has risen exponentially as a result of the health emergency.

“This is why we’re launching this appeal and why we have to act urgently to commission this additional vessel as quickly as possible.”

The charity has been a lifeline for young people

Katie Craven had to grow up fast – and credits Tall Ships Youth Trust with saving her.

She said: “My family were violent and my mum was into drugs. So, from about 10, I had to bring myself up.”At 14, I was homeless and sleeping on the beach or sofa surfing. At 15, I got my first conviction for burglary.

“I got community service and 12 months with the youth offending team [who] put me forward to join a Tall Ships Youth Trust voyage.”

Katie, 18, from the Isle of Wight, added: “My first voyage opened my eyes. You’re on board with people from different backgrounds, but no one judges you.

“Soon, I was invited to come back as a young leader.

“Now I have a painting and decorating qualification and a modelling contract.”

Life for Will Sears changed forever when he was 13.

While on holiday, he suffered a haemorrhagic stroke and was diagnosed with cavernous malformations. He was told he needed brain surgery.

Will, from Bournemouth, recalled: “I was told there were so many things I wouldn’t be able to do, like swim, cycle and even worse, sail.”

He spent three months recovering from the bleed and getting used to a cocktail of epilepsy drugs – but then his mother found the charity.

He said: “She approached Tall Ships Youth Trust and after working with my medical team, they took a chance.

“This was life-changing. I had a blast and left with a whole new positive view on life. It was like going from darkness into light. Sailing is freedom from my challenges.”

Everyone starts on a level playing field, says Vivienne Cox

They include individuals dealing with physical, mental or learning disabilities, young carers and those who have been excluded from mainstream education and are on the cusp of, or already involved in, crime.

Many have also been physically or mentally abused.

We work in partnership with youth organisations who refer their people to us, including special needs schools, pupil referral units, children’s services and other youth groups.

By working in this way, we ensure a continuum of care for them beyond their Tall Ships Youth Trust experience.

Individuals live and work together as a small community at sea. Everyone starts on a level playing field and there are no preconceived ideas about backgrounds or abilities.

Our professional, empathetic crew encourage them to take part in all onboard activities, including hoisting the sails, winching, cooking and cleaning.

They develop life and social skills, confidence and self-esteem to realise their true potential and make positive life choices.A survey of 665 crew members who sailed with us in 2019, found 97 per cent went on to, or remained in, employment, education or training.

The adverse effect of the pandemic on the lives of young people from disadvantaged backgrounds means the demand for our voyages is now greater than ever.

We have the knowledge and expertise to help, but to do this we urgently need to increase our sea-going capacity.

For information and to donate see www.tallships.org