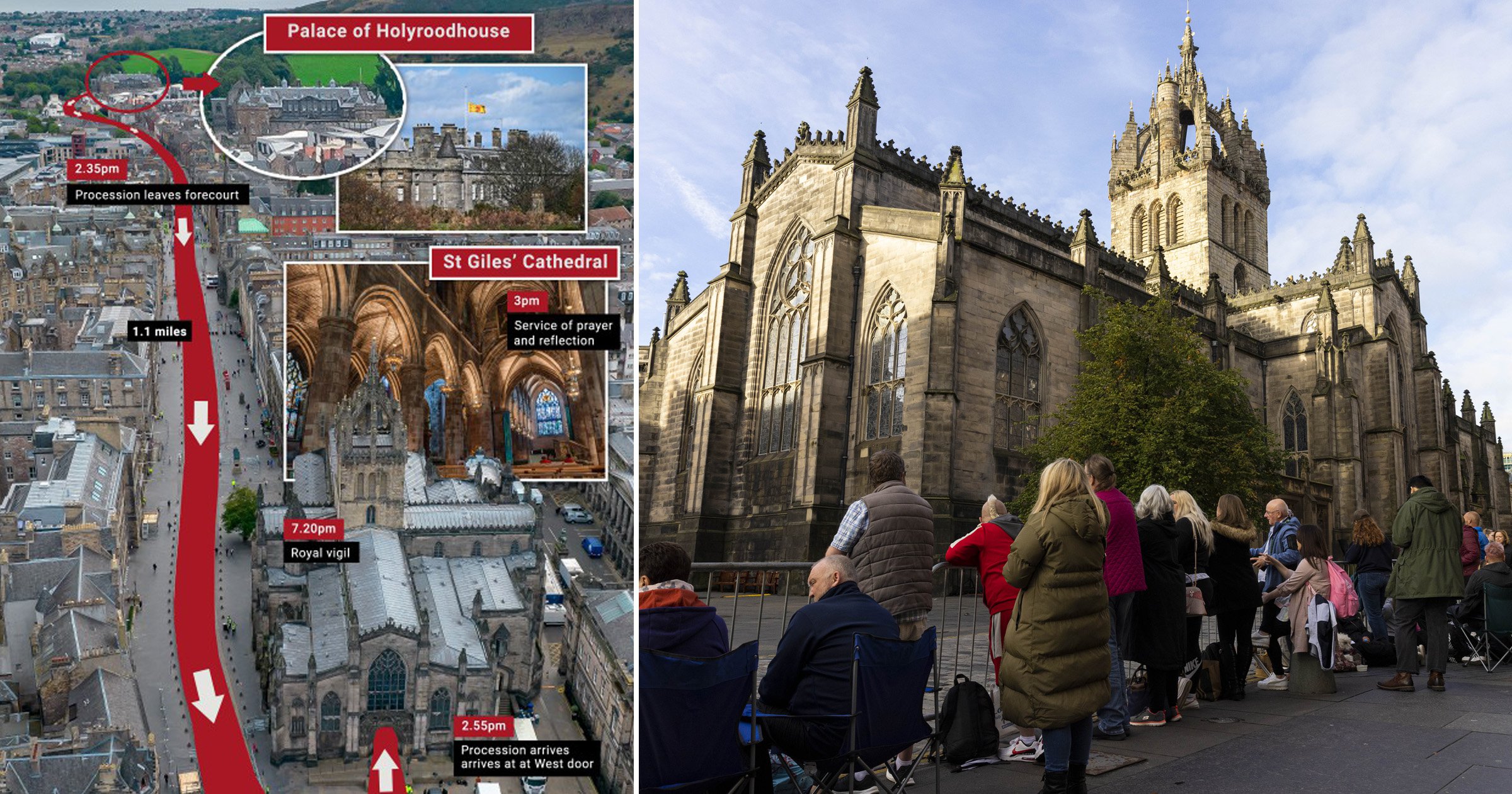 King Charles will today lead senior royals in a procession behind the coffin of his ‘darling Mama’ when it travels to Edinburgh’s St Giles’ cathedral.

Her Majesty’s lead-lined English oak casket – made for the late monarch 30 years ago – will be transferred by hearse after remaining at the Palace of Holyroodhouse overnight.

It will travel to the nearby cathedral at 2.35pm, and at 3pm King Charles is set to attend a service of ‘prayer and reflection’ for the Queen, who died peacefully at her home in Balmoral aged 96.

Dense crowds of mourners have been queueing along the procession route and amassing outside St Giles’ in the hope of watching the coffin pass by.

Those who camped overnight were seen waving Union Jacks at dawn as the Scottish capital braced for its largest royal event in 200 years.

Armed police and security services have formed rings of steel outside Holyroodhouse and St Giles’, with around 10,000 officers preparing for the biggest single security operation ever seen in Scotland.

It is understood British intelligence agents have cancelled holidays to oversee the cross-agency taskforce handling the Queen’s farewell, while foreign VIPs from around the world are set to join the armies of mourners.

The 2.35pm procession will set off from the Forecourt of the Palace of Holyroodhouse, made up of a hearse flanked by the Bearer Party of the Royal Regiment of Scotland.

A detachment from the King’s Bodyguard in Scotland and Royal Company of Archers will also accompany it.

After the King and his royal procession have followed on foot, with other members of the family in cars, they will be received by a Guard of Honour formed by the Archers company.

At 2.55pm, the Queen’s casket will be carried into St Giles’ where the Duke of Hamilton and Brandon will place the Crown of Scotland on top.

A service will be conducted by Reverend Calum Macleod, the minister of St Giles’, with a congregation to include ‘all areas’ of Scottish society.

The Queen’s coffin will lie at rest for 24 hours at St Giles’ amid continuous vigils, which will include one at 7.20pm by the King and senior royals standing guard at the casket’s four corners.

Full details about royal mourners have yet to be released, but there is speculation the Duke and Duchess of Sussex and the new Prince and Princess of Wales will be part of the group.

Other royals are expected to include the Duke of York as he re-emerges into public life following his shame over the Jeffrey Epstein scandal.

The Earl of Wessex, Princess Royal and her husband Vice Admiral Sir Tim Laurence are also expected to attend, while the Queen Consort Camilla is likely to be one of the royals travelling by car.

Charles, who is making the journey to Edinburgh from London, will inspect the Guard of Honour at the Palace of Holyroodhouse, before attending the ceremony of the Keys on the forecourt.

The King will also today hold audiences with the First Minister Nicola Sturgeon, followed by an audience with Alison Johnstone, the Presiding Officer of the Scottish Parliament.

Words of sympathy will be expressed by the Scottish Parliament when Charles and Camilla attend to receive a ‘motion of condolence’.

The Queen opened the devolved parliament in 1999, and its new building in 2004, visiting it 10 times during her record 70-year reign.

On Monday evening, Edinburgh’s lord provost and lord lieutenant for Edinburgh, Councillor Robert Aldridge, will hand King Charles the keys to the city in a ceremony at Holyroodhouse that he has said will be ‘an incredible moment of history‘.

Her Majesty’s coffin will lie at St Giles for public viewing from 5.30pm through to tomorrow, before being flown to RAF Northolt near London and then driven to Buckingham Palace.

Edinburgh’s ‘Royal Mile’, which links the city’s castle and Holyroodhouse palace, is expected to throng with crowds all day.

Mourners have been asked to join a queue for St Giles’ starting at George Square Lane on North Meadow Walk near the Meadows park on Edinburgh’s southside, not far from the cathedral.

Well-wishers will each be given a wrist band to allow entry to the cathedral, and encounter airport-style security at George IV bridge.

Mourners are being asked to pass the coffin without pausing so as many people as possible can pay their respects.

The government said: ‘Large crowds are expected and there are likely to be delays on public transport. People are being asked to check ahead and come prepared to stand in long queues.’

Among the waiting mourners are travel agent Marisa Ippolito, 61, from Manchester, who told MailOnline: ‘I came here to pay my respects and to witness this important historical event. It is very sad but I wanted to be here and see it myself.

‘Also I believe that the Queen created this situation, of spending her final days in Scotland to preserve the Union.’

Mum-of-two Caroline Jolly, who has taken her son, Ryan, 13, and daughter Neve, 5, out of school so they can pay their respects, added: ‘I felt compelled to come and be here. We’re only an hour away so I told the kids we’re going.

‘I want them to remembering this event and to be able to tell their children that they were here to pay their respects to the Queen.’

Today’s events are concentrated on locations just over a kilometre apart, and will be of the same significance as King George IV’s visit to Edinburgh exactly two centuries ago.

In August 1822, the monarch paid the first royal visit to the city in 170 years, for a series of events choreographed by the novelist Sir Walter Scott.

The visit was used to resurrect the Scottish heritage of the kilt and tartan after their suppression in the wake of the Jacobite uprising.

Her Majesty’s death marks the first time a British monarch has passed away in Scotland, and the first time their coffin has laid in rest in Edinburgh.

The date the Queen died at Balmoral would traditionally have been D-Day, or D+0, in the plans, but due to the evening announcement of her passing, the nation is now on its third of the 10-day plan to mark her life and death, which culminates in her state funeral at Westminster Abbey on Monday.