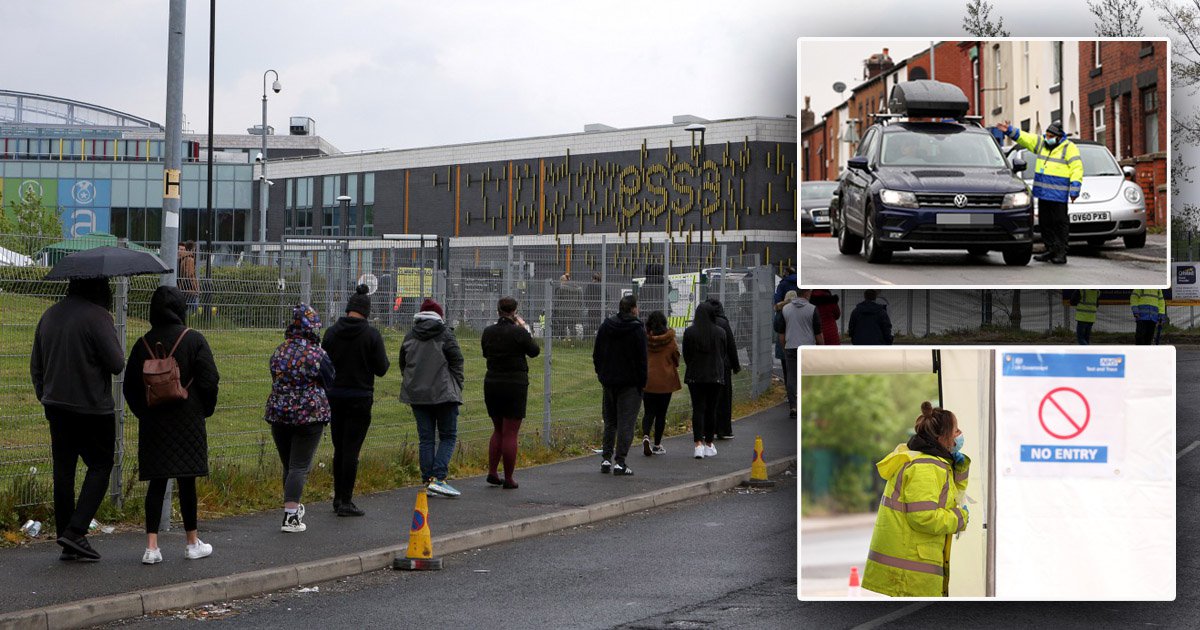 Huge queues have formed at a vaccination site in Bolton after people were urged to turn up and staff would ‘find a reason’ to give them the jab.

The town is one of the hardest hit places by the new Indian variant but the Government has officially ruled out ‘surge vaccinations’ as there are doubts over whether it would be effective at stopping transmission.

Officials are nevertheless attempting to vaccinate 4,000 people with the Pfizer jab in Bolton before the end of the day.

Dr Helen Wall, the person responsible for the vaccination programme in Bolton has told people to attend even if they are ‘not sure’ whether they would be eligible.

In a Facebook video, she said: ‘If you’re not sure if you’re eligible, get yourself down here today and we will check it out for you.’

Meanwhile, Bolton Council’s cabinet member for adult services Andy Morgan has urged people with Bolton postcodes to turn up regardless of eligibility and promised staff would ‘find a reason to vaccinate you’.

He tweeted: ‘Anyone with a Bolton postcode and registered with a Bolton GP can visit the vaccine bus at the Essa Academy vaccination site and #GetVaccinated. The team will find a reason to vaccinate you. Closes at 5pm. The 4000 vaccines must be used today. #TeamBolton.’

The call outs have led to a surge in interest at the site with photographs showing queues stretching around the block.

People of all ages were seen waiting in line amid fears the more transmissible Indian strain is spreading rapidly around the community.

The site is being manned by 42 officials carrying out vaccinations and a vaccination bus.

One local person said: ‘It’s unbelievable how many people have turned up. There are thousands of all ages and ethnicities queuing patiently to get a jab. The vaccinators seem to be accepting anyone and everyone.’

Earlier in the week neighbouring Blackburn, which has also been hard hit, promised all over 18s a vaccination but were forced to backtrack and clarify that only those eligible under the Government’s rollout would qualify.

This currently includes people over the age of 38 and anyone with underlying health conditions.

Scientists have said, because it takes a few weeks for immunity to build up, it does not make sense to divert vaccines away from other parts of the country to the hotspots.

The Government has instead opted to bring forward the second vaccination date for the over 50s from 12 weeks to eight.

On Thursday, Public Health England data showed a rise in cases of the Indian variant of concern from 520 to 1,313 this week.

Earlier, Bolton Council chief executive Tony Oakman said the council is ‘glad’ about the acceleration of the vaccination programme across Bolton and will keep ‘pushing’ for people aged 18 and over to be able to get a jab.

Mr Oakman said it has been explained that a rollout to people aged 18-plus is not possible.

‘At the minute we are having to work within the rules that have been explained in previous interviews, but we’re glad that we are getting the acceleration of the vaccination programme across Bolton, and we will keep pushing for 18 years plus,’ he said.