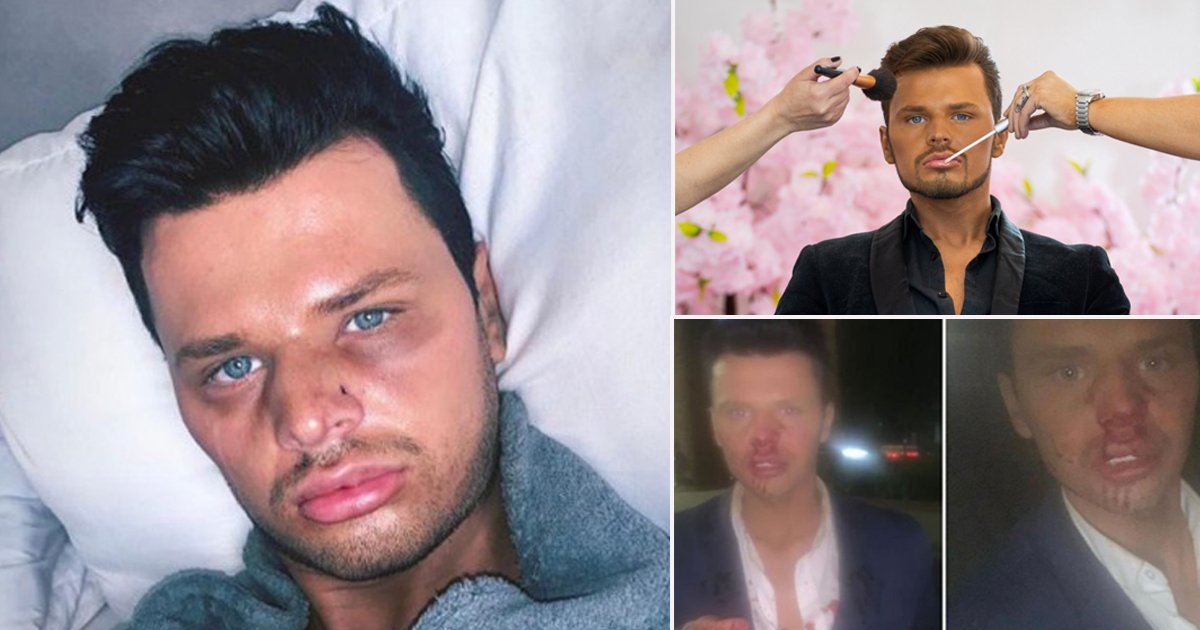 A ‘real-life Ken doll’ was set upon by thugs who ‘ruined’ his face right before he was due to appear on a new reality TV series.

Jimmy Featherstone, 22, says he was attacked at Silvers Bar in Hull on Saturday by two men, who repeatedly punched and kicked him while shouting homophobic slurs.

The botox lover, who spends £10,000 a year on surgery, said the pair wanted to ‘f*** up my perfect face’ before he appears on Hooked on the Look.

Jimmy was rushed to Hull Royal Infirmary with a broken nose and a nasty wound on his head, which left a trial of blood along the road and down his clothes.

His breathing has been impaired and he is awaiting brain scan results after the devastating attack, which took place sometime between 9pm and 10pm.

Hailing from west Hull, Jimmy’s luxury lifestyle of cocktails, outfits and holidays has already established him as a well-known figure throughout the city.

Ultimately, his goal is to look like a real-life Ken doll and with filming starting next week, he was looking forward to showing off his look on camera.

But the boutique director says he is heartbroken from what was supposed to be a fun weekend out with friends ahead of his next adventure.

He said: ‘I questioned myself over and over why me. I didn’t sign up to be on TV to be assaulted or have such violence brought towards me.

‘They told me they wanted to f*** up my face for the TV show I’m going on to film from next week.

‘They kept calling me gay before coming over to break my nose into pieces.

‘The police put one guy in custody and I shall be getting my solicitor involved to take this to court.

‘I’m absolutely devastated and believe people should not have to face this by trolls. I sometimes wonder what goes through people’s minds.

‘I’m still in pain with breathing, and just waiting for my results to come back. I’m taking each day at a time to get better.’

Jimmy emphasised that he didn’t think the staff or security at the Silver Street bar were at fault.

He added: ‘It’s the judgemental world we live in today. I for one am lost for words as to why I was the target.’

While he’s getting better day by day, the ‘local celeb’ is nervous for the potential damage to his head and brain, and is nervously awaiting his results.

He said: ‘My face may be broken, and my heart may be crushed, but this assault will not be forgotten.

‘My life goes on and I will continue to film for the show from next week.

‘I’m honoured and privileged to be working with a great casting company and life goes on.’

Jimmy says he will continue to ‘live life’ in the way he chooses and is looking forward to appearing on TV soon.

Jimmy says looking good is ‘very important’ to him and that his regime of botox, hair styling and surgery is well worth the massive price tag.

He has his hair done every week, and a filler appointment can cost around £300 every time.

His next treatment was a nose job, but he may be forced to bring that operation forward following the attack.

He also takes helicopter rides to concerts and limos to parties, and is now seeking an older man, around 40 and above.

Jimmy’s 22nd birthday celebration cost around £2,000 which was described as ‘classy yet fabulous’.

It involved a three-tier cake, fireworks upon entrance to the party and a bouquet of flowers containing £20 notes.

Jimmy said: ‘People stop me in the street and just say how much they loved my birthdays and any other celebrations.

‘I can’t wait for next year. I really do feel I need to pull it out the bag and live up to my expectations.

‘My publicity has just grown. With this comes judgement and a lot of people who know me and don’t always have lots of nice things to say.

‘It’s not all bad but people will always judge but I’m where I am today and tomorrow I’ll be rising again.’