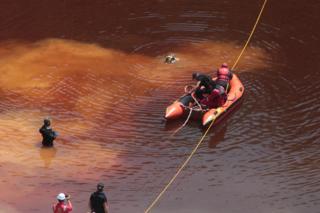 A suitcase containing the remains of a woman, believed to be one of seven victims of a suspected serial killer, has been discovered at the bottom of a lake in Cyprus, officials say.

It is the fourth body to be found in an investigation into what has been dubbed the island’s first serial killing.

A Greek-Cypriot army officer has confessed to killing the seven women and girls, all of foreign descent.

Authorities have been accused of not investigating properly at the time.

The national police confirmed to the BBC that a woman’s body was found on Sunday in a suitcase in a man-made lake in the village of Mitsero, some 32km (20 miles) west of the capital, Nicosia.

Police were searching the area after the 35-year-old suspect told investigators he put the bodies of three of his victims into suitcases and threw them into the toxic red lake, which is part of a now-defunct copper pyrite mine.

The body was in an advanced stage of decomposition when it was pulled from the lake, according to police officials.

Tests are now being conducted to confirm the woman’s identity.

The case first came to light earlier this month, when the body of 38-year-old Marry Rose Tiburcio, from the Philippines, was found in a flooded shaft near the lake.

The discovery triggered a homicide investigation, which led to the army official’s arrest.

The body of a second woman, believed to be 28-year-old Arian Palanas Lozano, also from the Philippines, was found in the shaft days later.

The suspect at first denied killing a third woman from the Philippines, Maricar Valtez Arquiola, 31, who has been missing since late 2017.

However, he then changed his testimony and confessed to the murder of seven women and girls over the past three years.

Following his arrest, the suspect showed investigators to a well at an army firing range where the unidentified body of a woman of Nepalese or Indian descent was discovered.

Marry Rose Tiburcio’s six-year-old daughter and a Romanian mother and her young daughter, who have been missing since September 2016, are believed to be among the victims.

Authorities have come under fire with accusations that they failed to take the cases seriously because of the victims being of foreign descent.

The main opposition party has called on the police chief and justice minister to resign.

“Unprecedented indifference was shown simply because these people were not of Cypriot origin but came from foreign countries,” said AKEL leader Andros Kyprianou.

Doros Polycarpou, the director of Kisa, a migrant and refugee support group, told Reuters that Cyprus operated a “two-tier system” in which “some non-Cypriots did not enjoy the same rights as locals”.

Police have responded that a restrictive legal framework limits their ability to check things like phone records without a court order, which is only issued if a criminal offence punishable by more than five years imprisonment is suspected.

They have said they will investigate the handling of the case.