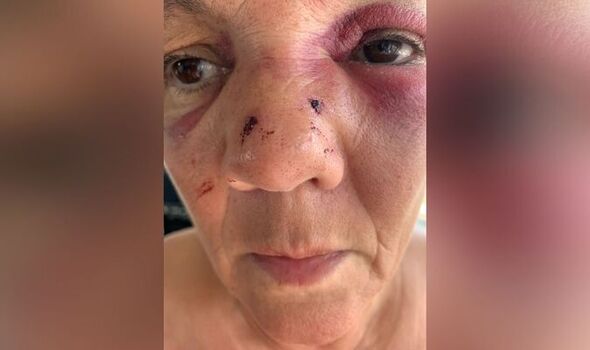 Shirley Hollies, who owns Shepherd Street Chippy, in Biddulph, Staffordshire, suffered two black eyes and was left pouring with blood after she delivered to Wendy Mountford’s bungalow. The 56-year-old had to undergo surgery as the attack left her with a deviated septum – meaning she struggled to breathe properly.

The mum-of-six, who has run the takeaway with her husband Clint for 11 years, has opened up about the ordeal and told how it has impacted her entire family, reports StokeonTrentLive.

Shirley, Clint and their six daughters are all still coming to terms with what happened on the evening of April 24, 2021.

Her attacker, Mountford, aged 55, denied using the plate as a weapon and claimed she had only been acting in self-defence after Mrs Hollies had attacked her. But the 55-year-old was convicted of assault occasioning actual bodily harm following a trial at North Staffordshire Justice Centre.

Shirley explained that day had been a gloriously sunny Saturday and the chip shop was busy with the evening rush.

Shirley and Clint had started doing home deliveries the year before in response to the coronavirus lockdowns.

She said: “My daughter Amelia took a phone call for a delivery and she was really having trouble understanding the person on the phone.

“She eventually managed to get the order and the food was delivered.

“Within 20 minutes we had a phone call to say something was missing from the order. We’re not perfect and any mistakes we try to rectify them.

“She gave the phone to me and it was a man on the phone. I eventually was able to understand that they were missing chips, peas and gravy from their pudding dinner.

“Clint was out at the time, the bungalow is just round the corner and the shop was busy so I thought I’d go round myself.

“I knocked on the door and Wendy answered. I said ‘there you go, there’s your missing food, is it all sorted?’.

“She said her fish, chips and peas were cold. She was being unreasonable and I just kept saying ‘what do you want me to do to make this right?’.

Her boyfriend was in the back shouting and swearing at me and I thought ‘that’s it, time for me to go’.

“I said ‘I’m going and you will be reimbursed’. I turned around to go and I felt something hit me on my back. I had peas all down my back.

“I turned round to say ‘what are you doing?’ and before I knew it I just saw this plate hit my face and it smashed. I had my head down to protect my face thinking ‘what just happened?’.

“Then I felt someone pull my hair. When I felt it release I ran out to my car and said I’ll be ringing the police. Her boyfriend came out and was shouting and swearing at me again.”

Shirley went back to the chippy and Clint called the police before taking her to A&E. She says she was unable to sleep for two days following the incident.

She said: “I couldn’t go in the chip shop looking like that so I went round the back. I was in a state, crying and my nose was gushing with blood.

“You don’t want your children seeing you like that. My family keeps me going, that’s really helped me and they continue to support me.

“The first time I went out on my own after it happened, I felt anxious and vulnerable and I’m still looking around when I go out now. It really has changed me.

“I just keep reliving things everyday going over it again and again. For two days after it happened I couldn’t sleep, just churning things over.”

During her defence evidence, Mountford admitted that she sometimes took too much prescription medication and hallucinated. She is due to be sentenced on June 13.

Both Shirley and her 18-year-old daughter Amelia gave evidence at the trial last week and Shirley says she is ‘relieved’ that the guilty verdict was reached.

The family hope they can now put this ordeal behind them.

Shirley added: “We still get upset now 12 months on, we were in tears in court. I just wanted her found guilty. It was a massive relief. I feel much much better, I’m getting past it now and moving forward.”

Shirley’s husband Clint says it’s been an experience he “wouldn’t wish on anybody”.

The 57-year-old added: “It’s been really difficult. It changes everybody and not for the better.

“But we do still have faith in humanity. We’ve had help and support from customers and people who don’t really know us have offered support, which is heart-warming as well.”