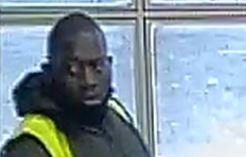 A man is being sought by police following the attempted abduction of a seven-year-old girl from her mother.

The little girl was grabbed by an unknown man in Mary Datchelor Close, Camberwell, south-east London at about 5pm on Thursday October 22.

She was not injured and the man released her a short time later before making off on foot.

Detectives have now released an image of a man they wish to speak with.

It comes after Clifford Daley, 33, was charged over the crime last year but later eliminated as a suspect and released.

Anyone who knows the man’s name or has further information is asked to contact police on 101.