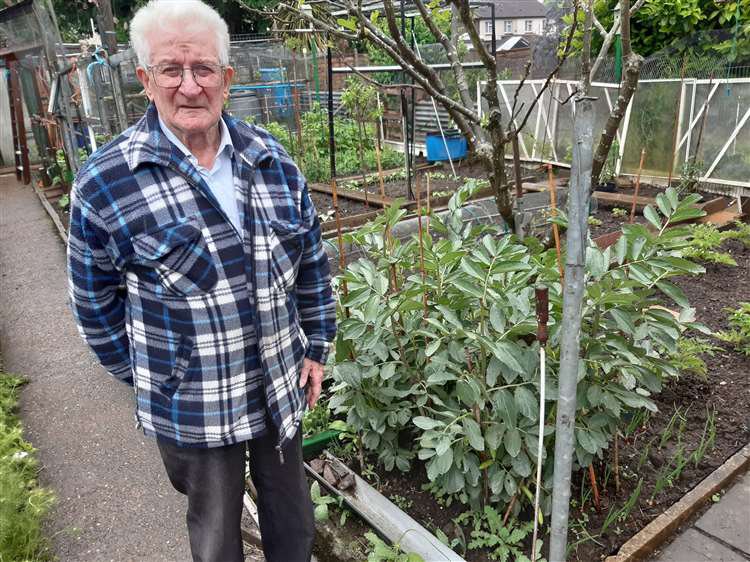 A pensioner suspects that someone who wants to drive him out of his allotment has deliberately poisoned his broad beans.

Carlo Attubato, 85, is convinced someone has targeted him after seeing his plants wither and has reported the matter to the police.

He has worked the half-plot in Maidstone, Kent, for the past 28 years and has an substantial vegetable garden at his home, so he feels like he knows what he’s doing.

Carlo raised the alarm after noticing the broad beans at his allotment were doing much worse than ones he was growing at home from the same batch of seeds.

He was so concerned that he spent £72 to send off soil and plant samples to a private laboratory for analysis.

Scientists found a number of compounds which would stunt the plants’ growth. They say they could have been left over from a burning process but it is also possible someone dumped them there.

He told KentOnline: ‘I’ve grown everything over the years: potatoes, sweetcorn, parsnips, peas, strawberries, raspberries, gooseberries, cantaloupes and broad beans. But I’ve never seen anything like what happened this year.

‘I believe somebody wants me out of the allotment – but it’s been very difficult to get the police or the allotment management committee to take this seriously.’

Carlo, who came to Britain from Italy in 1964, says there’s nothing he has put on the plants to account for the withering.

He’s worried that as long as his nemesis is out there, he could dig out all the polluted soil to start over, only for his crops to be poisoned again.

Police confirmed they had received a report of criminal damage at the council-owned allotment and a PCSO has visited to get more details.

But a spokesman for the force said there are ‘no identified lines of inquiry to progress an investigation any further’.

Maidstone Borough Council said: ‘Our Parks and Open Spaces team has been made aware of this allegation, although we have not yet seen any results from soil testing.

‘We are willing to help investigate this and may need to take further samples following our own scientific procedures. More information will become apparent when the results of these tests are assessed.’