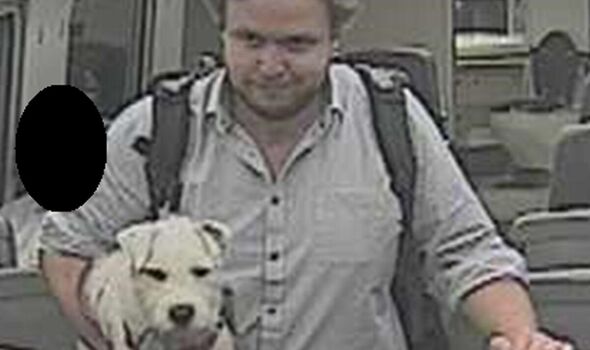 The most recent incident occurred on July 14 last year after a dog bit a seven-year-old girl at Henley-on-Thames train station in Berkshire. Several months later on October 27, the same dog jumped out of the seat as a train guard was walking through the carriage and bit her arm. The train was travelling from Frome in Somerset to London Paddington at the time.

The British Transport of Police is appealing for anyone who might recognise the “out of control” pet to come forward.

Photos released by the force show a man in a white shirt and backpack carrying the dog through a train carriage.

The dog has white hair and appears to be wearing some kind of harness in the photo.

Officers believe the man in the photo may have information that could help with their investigation.

It is currently against the law to “let a dog be dangerously out of control anywhere”, including public and private spaces and in an owner’s home.

Dogs are considered out of control if they injure someone or make someone worried they might be injured.

Such offences could result in an unlimited fine or a prison sentence of up to six months.

If the dog injures someone, a sentence of up to five years could be passed, and the owner may not be allowed to own a dog in the future.