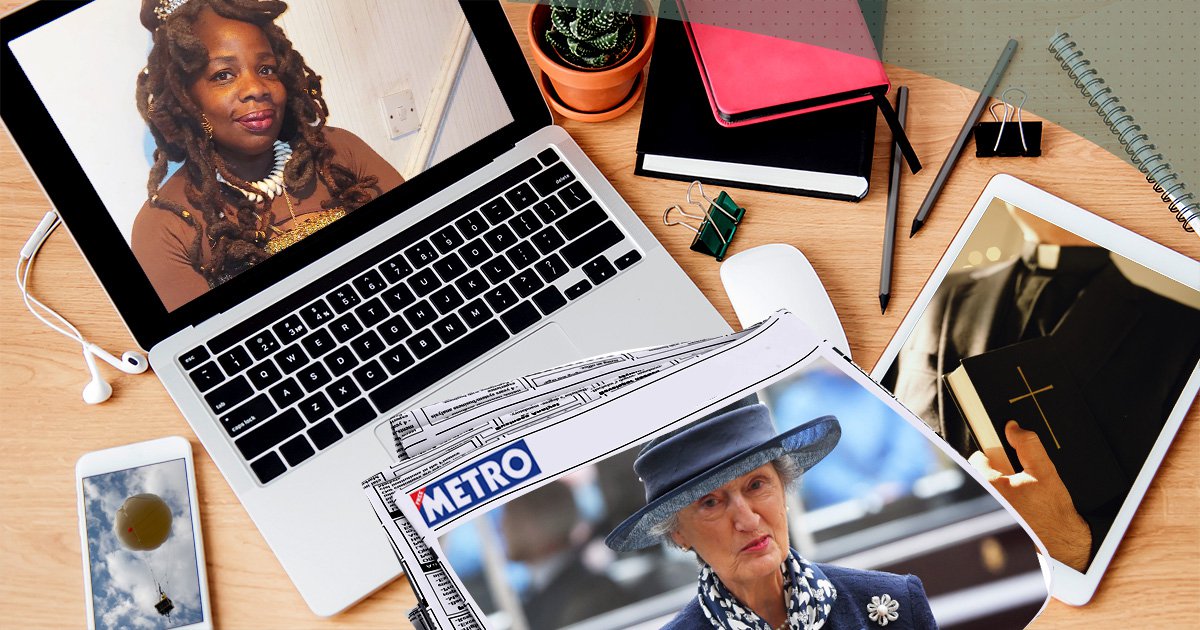 While the majority of readers take a dim view of the way Lady Susan Hussey treat Ngozi Fulani at a palace reception, one says the charity boss was being ‘obtuse’ for not giving a straight answer.

Another points to the ‘vilification’ of Meghan Markle after she spoke out about her own treatment within royal circles, one calls for a clearout of the ‘fossils’ at Buckingham Palace while another says racism will never be defeated until we address our nation’s past.

Other issues firing up readers today include diversity in the church regarding the LGBT community, plus a comment on our Sex Column which involved so-called ‘male menopause’.

Read on to hear what Metro readers have to say.

■ Prince William’s godmother has resigned from the royal household after repeatedly asking a black British charity boss where she was ‘really’ from (Metro, Thu). There’s so many sad things about the way in which Lady Susan Hussey treated Ngozi Fulani. And so many people don’t even realise they’re being racist and that their behaviour is unacceptable. Rents, Leith

■ Thanks to Lady Susan Hussey’s racist questioning of Ngozi Fulani, we now know beyond reasonable doubt that such bigoted attitudes do still exist within the royal bubble in this country. Who’d a thought it? Ah, yes, Meghan Markle mentioned it, didn’t she? Robert Boston, Kent

■ I am black, born in the UK of Jamaican parents. If anyone asked me where I was ‘really from’ I would stand so proud to educate them about my Jamaican heritage, originally from Africa. I really cannot see the racist drama. It’s a joke and makes race relations even worse. Ms D Williams, West Midlands

■ So, here we are with another of the snotty-nose-brigade royals putting their foot in it again. Ngozi Fulani should have replied, ‘I am here because you were there.’ Time for this so-called royal outfit to be dismantled. Peter, Glasgow

■ Those who vilified Meghan Markle for speaking out about attitudes towards her and her son, Archie, must now reflect on their own attitudes if they advocate honesty.

All those who considered Meghan and Harry wrong to speak out because it was ‘offensive’ to Buckingham Palace – rather than claiming what they were saying was inaccurate – must ask themselves, in the light of the experience of Ngozi Fulani, whether it is possible to be honest without embracing the reality that honesty will invariably offend some. Fred, Huddersfield

■ Ms Fulani was asked where she was ‘really from’. So what? I am asked this same question almost daily – a perfectly normal and acceptable inquiry, particularly while making ‘small talk’ at a social gathering among strangers. I always proudly reply that, while I am a British citizen, my roots are in South Africa – a straight answer to a straight question. Why couldn’t Ms Fulani have done the same instead of being obtuse and turning the whole incident into a racial issue? Merry Hampton, via email

■ Lady Hussey sounds like she took more than a leaf or two out of Prince Philip’s book on tact and diplomacy. One has to ask why King Charles kept the old fossil on. She did the right thing, falling on her sword. Time for a clear out at Buckingham Palace. Robert Sandall, Clapham

■ Lady Susan is clearly a harmless eccentric from a generation that spoke their mind – not ideal in this day and age but clearly an error. I don’t think she should have resigned (been cancelled) – everyone makes mistakes.

But I would have thought Ms Fulani could have handled that with more maturity and explained to Lady Susan that her remarks could be felt as offensive so the elderly lady would understand. Bob H, Croydon

■ Racism will continue to raise its ugly head in this society until the monarchy and its government offer an apology to black people for the most diabolical of all crimes committed against humanity – the enslavement and dehumanisation of a people for more than 400 years.

This was an act authorised by Elizabeth I and for which none of the subsequent kings or queens that followed have offered an apology.

Until this is done and it is taught in schools that this is an abomination and there are laws in place to support this and there’s a memorial day to remind this country of its past, this disease will continue. Jonathann, South London

■ One down, how many more to go? There’s no excuse for what happened at the palace reception. Hussey’s comments to – sorry, interrogation of – Ngozi Fulani was unacceptable.

Being the godmother of William, she was probably seen by those in the palace as a harmless dear little old lady. Well, it’s now come home to roost that she wasn’t and Meghan and Harry have been vindicated.

It’s embarrassing for William and Kate, as this has now overshadowed their visit to the US, but how much of this did they consider as being unimportant and simply accept it as ‘just’ casual racism? Andy, London

Which churches don’t welcome LGBT people? We need to know

■ Despite the current wealth of news about LGBT issues, there are still many churches that ignore LGBT people or exclude them altogether. They are treated as ‘non-persons’, despite these churches’ claims of promoting diversity.

Pre-war, the term ‘restricted’ had been applied to anti-Semitic clubs in the US that did not accept Jews. The topic was explored in the 1947 film Gentleman’s Agreement, starring Gregory Peck.

My suggestion is that the word should be resurrected and applied to those lists of churches that do not welcome LGBT people, thereby saving newcomers time and energy in finding out for themselves. Antony Porter, London

Good for you, Denise, you must be an absolute guitar legend

■ Denise Gordon (MetroTalk, Thu) says I must be in the ‘girls-can’t-play-guitar’ camp because I questioned her assessment of Dr Feelgood’s Wilko Johnson as ‘entry-level’. I’m definitely not. I taught my daughter to play. And Denise, if you did nail Wilko’s Going Back Home in five minutes, well done you. One for the girls, then. Kev, Suffolk

■ Is Denise Gordon in a band? Not only did she ‘nail’ Going Back Home in five minutes but can play Far Beyond The Sun by Swedish heavy-metal guitar maestro Yngwie Malmsteen. She sounds like an absolute legend. Panos Nicolaou, London

■ To clear something up, Going Back Home was written by Wilko and Mick Green and appeared on a Wilko/Roger Daltrey album but it was originally used on the 1975 Dr Feelgood album Malpractice. Steve Cooper, Sheffield

■ Yes Steve (MetroTalk, Wed), UFOs do exist but they should be AYUFOs – As Yet Unidentified Flying Objects. They usually turn out to be weather balloons or military weapons. Len, Barking

■ Regarding the wife’s concerns about her promiscuous husband in the Sex Column (Metro, Thu),

I’m no expert but if someone uses the ‘male menopause’ (which supposedly includes a drop in sex drive) as an excuse for wanting more sex, they’re probably making it up. Paul, London

■ Stefan rightly cites the rise in atheism for a fall in those identifying as Christian (MetroTalk Thu). Education is behind this. Belief in a white, male and Christian god is irrational and comes, in the main, from brainwashing at an early age. Just Jack, Musselburgh

Start a text with VIEWS followed by your comment, name and where you live to 65700. Standard network charge applies. Or email [email protected] Helpline for Views: 020 3615 0600. Full T&Cs on metro.co.uk/terms Metro is a member of the Independent Press Standards Organisation. Comments may be edited for reasons of legality, clarity or space.