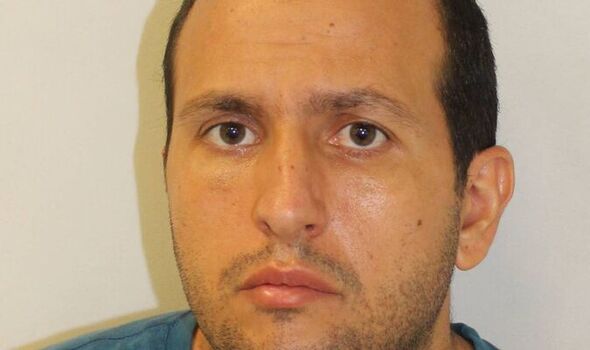 Koci Selamaj, 36, may never be released after Mr Justice Sweeney set the lengthy minimum term for his life sentence. The pizza delivery driver beat and strangled Sabina, 28, in a sexually motivated attack in a London park.

His ex-wife Ionela Gherghisan had told how he throttled and beat her “black and blue” and demanded car park sex after their separation.

Ionela, 45, left the home she shared with the Albanian national last August after he repeatedly grabbed her by the throat.

Several weeks later, Selamaj demanded she have sex with him in the car park of the Grand Hotel, Eastbourne, where she worked but she turned him down.

Chillingly, he made the proposal hours before he murdered infant school teacher Sabina.

Ionela, who has now returned to her native Romania, said: “There were times I was scared to stay in the same house with him as I was afraid for my life.

“He tried to strangle me three times, but the last time was when I became really terrified. He came home from work and put his hands around my neck, yelling: ‘Why didn’t you answer your phone?’

“I was in bed, shocked. He snapped out of it and let go of me but he didn’t apologise. I was his first victim, but something stopped him from killing me.”

Ionela lied to friend Michael Scott – an A&E nurse at Eastbourne General Hospital – that she was in a car accident to explain bruises Selamaj had caused.

Mr Scott said: “She was black and blue…bruised all over. She [said] she stepped off a kerb in front of a car.”

Mr Scott, who met her after setting up a Christian organisation to support immigrants, recalled: “She was desperate when we met her, really desperate… I don’t know how she met [Selamaj]. My gut reaction is she was probably brought into the country by him.”

Another friend of Ionela said of the killer: “He could be quite controlling. He would get angry with her, his behaviour was very unpredictable…he had a bad temper.”

Selamaj murdered Sabina last September as she walked through Cator Park, Kidbrooke, south-east London. He had driven there from Eastbourne, then spent at least 30 minutes looking for a victim.

The Old Bailey was told he ran up behind her and struck her 34 times with a 2ft-long metal triangle used by motorists for traffic emergencies.

Selamaj carried her up a grassy bank and strangled her. The teacher at Rushey Green primary school in nearby Catford was found nearly 24 hours later by a dog walker.

Mr Justice Sweeney said Selamaj, who admitted murder but refused to attend his sentencing, showed no remorse – and told him: “You are not a human being, you are an animal.”

Metropolitan Police Detective CI Neil John said: “We are pleased Selamaj will spend the majority of his life in prison.”