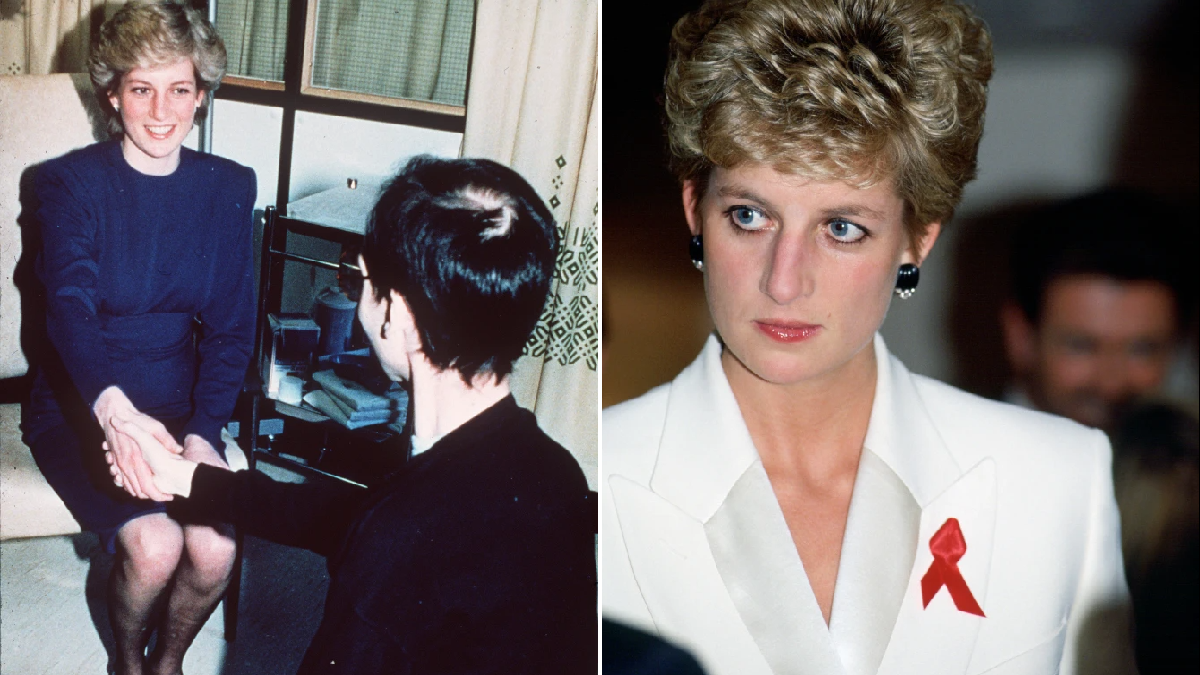 The day I met Princess Diana, there was an incredible buzz throughout the Broderip Ward at the Middlesex Hospital.

It was 9 April 1987 and she was there to officially open the first AIDS ward in London – which had already started admitting patients a month earlier.

I was a doctor working on this ward at the time and I’ll never forget that day.

As it was a high-profile event, many of the patients at the time were fearful of inadvertent ‘disclosure’ by the press, and so had temporarily been housed on other wards in the hospital.

One patient was keen to meet Princess Diana though and was happy to be photographed with her. I thought this was a really important thing for him to offer to do.

Of course, the photograph had to be taken from an angle that clearly showed Princess Diana shaking his hand without wearing protective clothing or gloves, and at the same time didn’t reveal his face, so he couldn’t be identified.

On her arrival on the ward, she was introduced to several of the ward nursing and medical team – including myself. She was delightful.

She was clearly incredibly well-informed and asked us questions about how we cared for our patients, as well about how we felt about working on the Broderip Ward.

Many of the ward team had not told their family and friends exactly what job they did at The Middlesex Hospital and she was particularly interested to know the reasons why.

On that day, she famously shook hands with AIDS patients and stated: ‘HIV does not make people dangerous to know. You can shake their hands and give them a hug. Heaven knows they need it. What’s more, you can share their homes, their workplaces, and their playgrounds and toys.’

I was very excited and, at the same time, privileged to be part of Princess Diana’s visit.

Working on the ward in 1987 was emotionally challenging.

I don’t come from a medical family, and I was the first family member to go to university.

I’d wanted to be a doctor from around the age of 10 because two of my school friends’ fathers were doctors – one was our family GP. I was both inspired and fascinated by how a doctor could use their knowledge of the human body to diagnose and treat people just by talking to them and examining them.

Studying science at school fuelled my enthusiasm. Then being at medical school was like a dream come true and I was so excited when I qualified in 1980.

Throughout my career, it has been a privilege to be able to use my knowledge and skills to provide care for people when they are sick and vulnerable.

I first cared for people with HIV in 1986 when I worked at University College Hospital in London. They were grim times because AIDS was then a new and very frightening disease.

Having AIDS was regarded as a death sentence in those days. Many patients did not tell anyone about their illness, and others were shunned by their family and friends when they shared their diagnosis with them.

I vividly remember my first patient who had developed Kaposi sarcoma on their skin and hid the lesions from sight by wearing a long-sleeved shirt and a scarf, regardless of how hot it was. He then succumbed to pneumocystis pneumonia, which is a serious chest infection that arises as a consequence of a weakened immune system caused by HIV infection.

Of course – at that time – although we could treat many of the complications arising from the immune system being weakened by HIV, we did not have any means of treating the HIV infection itself.

I was part of a specialist multi-disciplinary team of nurses, dieticians, pharmacists, physiotherapists, and doctors. We were providing care for people living with HIV who needed to be in hospital for treatment of an infection, or a cancer that had occurred as a consequence of their weakened immune system.

We weren’t simply treating that condition – we treated each person as an individual with their own unique life experiences and relationships. Inevitably, many needed to be readmitted to the ward after only a few weeks or so. Having been successfully treated for one condition they had then developed a different condition.

Consequently, we got to know them very well, as well as their partners and families. At that time, there was no effective treatment for HIV and there was incredible sadness among the ward team when someone died.

Things began to improve in mid-1996 when powerful combination antiretroviral therapy (HIV treatment) became available and very quickly we saw a marked decrease in the number of people with HIV needing to be admitted to hospital, as well as fewer deaths occurring.

In 2020, it was estimated that there were almost 107,000 people living with HIV in the UK, according to the UK Health Security Agency. In 2020, 95% of people who live with HIV in the UK were diagnosed, 99% of those who were diagnosed and in care were taking HIV treatment (antiretroviral therapy), and 97% of those who were treated were virologically suppressed – which means they can’t pass the virus on.

People with HIV who are diagnosed early and are taking HIV treatment have a normal life expectancy. Unfortunately, HIV stigma still exists.

Looking back at Princess Diana’s visit, it was hugely important. The iconic photograph of Princess Diana shaking hands with a patient with HIV and not wearing gloves or protective clothing changed everything.

At the time, many people incorrectly thought that you could get AIDS from touching someone living with HIV. She showed the world that HIV cannot be acquired by everyday contact. It marked the start of her outstanding efforts to help change public and media attitudes towards people with HIV.

Thankfully, from March 1987 – when I first started working on the Broderip Ward – until now, I have never encountered stigma from colleagues, family or friends when they have learned about my job.

Throughout her life she worked tirelessly to end the stigma associated with HIV and AIDS. She became a patron of the National AIDS Trust. Her legacy lives on in her sons – both of whom have continued to help fight HIV stigma.

It’s why I’m so proud to have been involved in play Moment of Grace which was performed earlier this year – telling the story of Princess Diana’s visit to the ward, from the viewpoint of a patient, a nurse, and a father estranged from his son.

A colleague put the playwright Bren Gosling in touch with me, as he knew I had been working on the Broderip Ward when Princess Diana came to officially open it.

I was able to describe to Bren how the ward was set out, who the team members were, what uniforms the nurses wore and how we provided day-to-day care for our patients. I also described the preparations leading up to the day – for example the strong smell of fresh paint in areas just outside the ward.

It’s now 35 years later and this event is a part of living history.

I feel humbled to have been part of that visit, and 35 years later I am pleased to have been able to use my memories of working on the Broderip Ward and of Princess Diana’s visit, in order to have helped Bren with his play.