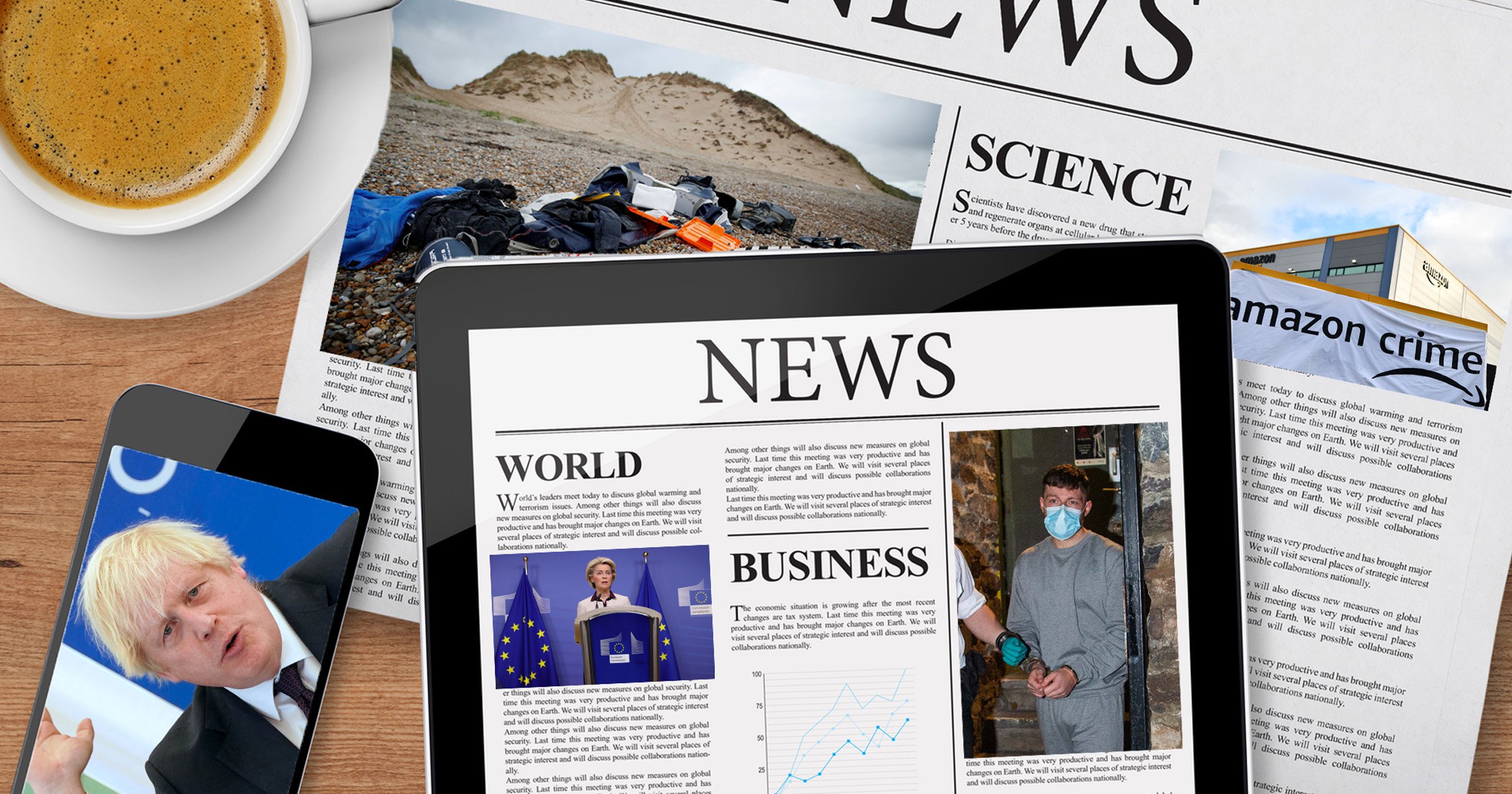 You’re not alone if you’ve been more focused on the drama unfolding in the I’m A Celeb castle than the news this week – with viewers including former Jungle Queen Katie Price left ‘gutted’ after GMB host Richard Madeley was forced to quit.

But if you need a distraction from watching famous faces bricking it over Bushtucker trials; perhaps you’re desperate to avoid a Black Friday weekend blow-out; or maybe you’ve already binged the new series of Selling Sunset (go on, admit it) then read on for our round-up of this week’s top five stories.

We’ve kept an eye on all the headlines you need to know about, from the new highly-transmissible Covid variant to the tragedy in the English Channel which has claimed the lives of 27 people.

And how could we not include Boris Johnson proving he is perhaps one pork pie short of a picnic after a ham-fisted speech to business leaders about Peppa Pig World – which sparked comparisons to bumbling Mr Bean.

Scientists are said to be ‘deeply concerned’ about a new Covid-19 strain with an ‘incredibly high’ number of mutations set to drive up infections worldwide.

Six southern African countries, including South Africa, Namibia, Lesotho, Botswana, Eswatini and Zimbabwe will return to England’s red international travel list after the variant, described as the ‘worst one we’ve seen so far’, was detected.

Experts fear the B.1.1.529 variant, which originated in Botswana, can evade immunity from vaccines and previous infection.

Now hundreds of passengers who arrived in Britain have been urged to come forward as dozens of cases were discovered in South Africa, Hong Kong and Botswana.

Health Secretary Sajid Javid told the Commons on Friday morning how it was ‘highly likely’ the variant has travelled to other countries.

Later on Friday afternoon the Belgian government confirmed the continent’s first case of the new variant – as the EU recommended a ban on countries affected by the spread.

TL;DR: At the moment there are no plans to impose a lockdown in Britain over Christmas – but it’s probably best not to rule it out.

Tragedy as 27 drown in the English Channel

Seven women including a mum-to-be and three children were among 27 people who perished after trying to cross the English Channel from Calais in a dinghy on Wednesday, in what is believed to be the deadliest migrant boat tragedy.

A husband awaiting his wife’s arrival to Britain tearfully revealed how he ‘feared the worst’ after her GPS signal cut off suddenly during her boat journey.

Now a war of words has erupted between Britain and France over the crisis, as President Emmanuel Macron blasted Prime Minister Boris Johnson on Friday for writing a letter urging him to take back people who had crossed the Channel.

TL;DR: A suspect has been charged with murder over the disappearance of a ‘beautiful’ and ‘talented’ teenager in Plymouth.

Extinction Rebellion and Animal Rebellion activists blocked Amazon sites on across Europe on Black Friday in a bid to disrupt 50% of deliveries.

The activists targeted 13 sites across Britain on the biggest shopping day of the year in a ‘stand against Amazon’s exploitation of people, animals and the planet’, as they accused the internet giant of ‘exploiting workers, rampant wastefulness and ecological destruction.’

Demonstrators also assembled outside distribution centres in Germany and the Netherlands in the hope of forcing deliveries to grind to a halt.

The company has vowed to hit net-zero by 2040 – but it has failed to convince the protest groups.

TL;DR: Maybe don’t bank on your Black Friday bargain arriving as promptly as you hoped.

Another day and another difficult headline for the Prime Minister who appears to be lurching from crisis to crisis at the moment.

Mr Johnson made a right pig’s ear out of a speech at the CBI on Monday when he made vroom vroom car noises and also revealed his apparent love for Peppa Pig World.

In what was described as the Prime Minister’s ‘weirdest’ address ever, the usually eloquent Tory leader appeared to flounder when he lost his place in the middle of the talk – muttering ‘blast’ and asking the audience to ‘forgive me’ three times during an excruciating 30-second pause.

Mr Johnson’s speech is said to have sparked fury among ‘appalled’ backbenchers who compared him to Mr Bean as a senior cabinet source apparently said of his premiership: ‘it’s not just working’.

His approval rating plunged to a new low after a scandal-hit month – including the so-called ‘sleaze row’ and de-railed plans for HS2 in the north – as one poll revealed on Wednesday how dissatisfaction is more widespread than at any point during his tenure.

All in a week’s work – but the question is, can ‘Teflon’ Boris bounce back?

TL;DR: The Prime Minister waffled on about Peppa Pig World during a speech to business leaders – just one of a very unfortunate series of events for the Tory leader.

Black Friday 2021 is finally here, and Brits are busy securing some sweet savings on their Christmas presents.

The mad dash to grab unmissable bargains has commenced, with stores around the world slashing their prices.

Here are some of the highlights from Black Friday 2021 so far: