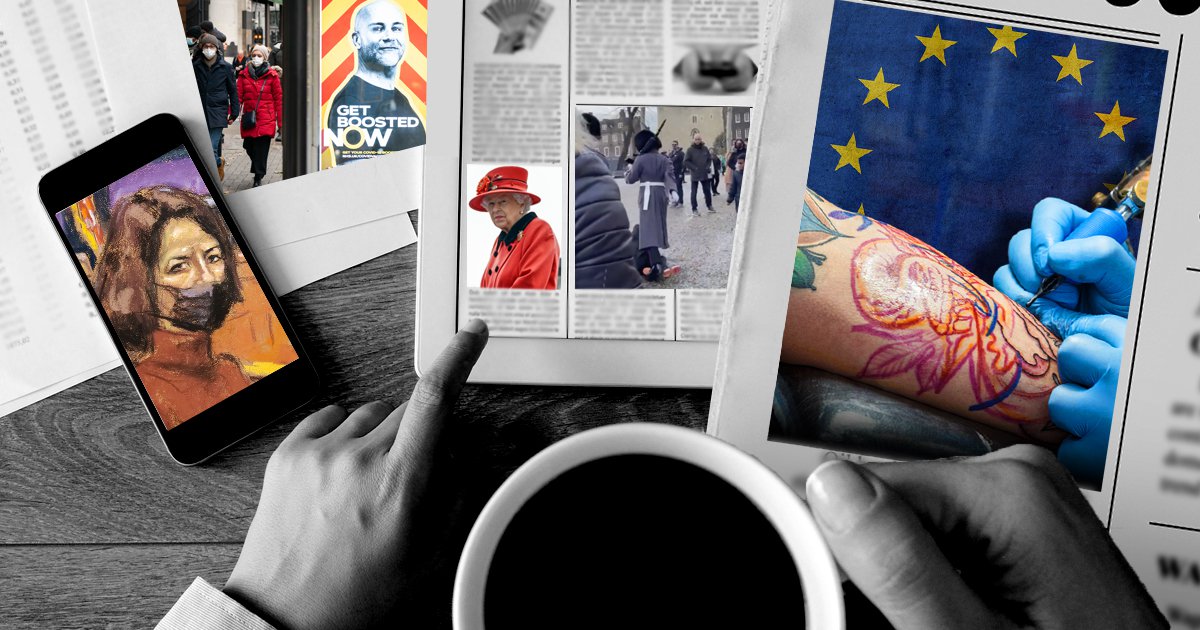 We thought it might be. That’s great, really it is. Congratulations.

Except, it’s not. You’re hungover. Of course you are, it’s New Year’s Day.

You’re hungover and you’re having a big old think about yourself. Your predictably hungover self. Go you.

Need to take your mind off it all? How about a nice refreshing blast of The News?

We promise that by the end of it you won’t be thinking about your banging headache, your somersaulting stomach or your crumbling nerves.

No, you’ll be thinking about the sheer horror of it all. The unrelenting, merciless horror.

Anyway, best wishes and all that.

It would be really nice to be able to start this round-up of the week without mentioning Omicron but we are where we are – and where we are is somewhere waist-high in the you-know-what.

The Guinness World Record Book of terrible things have been rewritten several times in recent weeks. Cases are now pushing 190,000 a day, more than double where they were a few weeks ago, and the testing system has been struggling to keep up with demand.

Minister defied expectations by deciding against introducing new measures, a move which delighted anyone hoping to get hammered this weekend but broke the hearts of knackered NHS workers.

The silver lining? The UK has approved a medication which may well qualify for ‘wonder drug’ status. The antiviral pill slashed the risk of hospitalisation and death by 89%, an astonishing figure.

But it looks like we’re going to be riding the winter wave for a while – and the only way is up for now.

TL;DR: No one asked for more but more is what we got.

A weird one at Windsor

The Queen has had a long, difficult year and even the most strident of republicans could hardly begrudge her a chill Christmas.

Instead, her Christmas plans were decimated by ill health and Covid (as ‘decimated’ as a plan can be when ‘a party at Windsor Castle’ is the fallback) and a very uninvited guest.

The monarch’s security were forced to burst into action when a man scaled the wall into the property armed with a crossbow. It was a terrifying incident to round off a rather miserable year for the Queen.

Prior to that she delivered a heartbreaking message to the nation which left millions teary-eyed long before the Baileys was even open.

The Queen spoke of the late Prince Philip’s ‘capacity to squeeze fun out of any situation’ and how the ‘mischievous, enquiring twinkle was as bright at the end as when I first set eyes on him’

Speaking directly to the many families setting one fewer place at the table this year, she added: ‘But life, of course, consists of final partings as well as first meetings.

‘And as much as I and my family miss him, I know he would want us to enjoy Christmas.’

TL;DR: Can we all just let the Queen have a lovely day please?

Ghislaine Maxwell, the daughter of a British newspaper baron who had every conceivable privilege in life, spent a period of her life helping a paedophile acquire young girls for abuse.

She denied everything until the bitter end but a jury saw through her story and convicted her on five counts relating to her activities with Jeffrey Epstein.

Maxwell will almost certainly spend a significant time in prison, perhaps until the day she dies, for her crimes.

The case could have a huge bearing on Virginia Giuffre’s civil lawsuit against Prince Andrew, a process which is due for a big week in New York.

One of the charges Maxwell was convicted of related directly to crimes perpetrated against Giuffre. Prince Andrew strenuously denies all allegations made against him.

Her conviction is the latest stage in a sordid, harrowing story which tells us something a lot more of us should have known a lot sooner about the world of rich men, vulnerable girls and abuse.

Whatever happens next, at least a few of them had their day in court this week – and won.

TL;DR: A good day for survivors the world over.

Look, we don’t want to have to be the ones to tell you this, but Brexit is a thing you’re going to have to care about again this week.

Stricter controls on goods moving between the UK and EU come into force on January 1 which, in short, get rid of the halfway house arrangements that were in place to prevent disruption after the messy divorce.

There could be trouble on the horizon, with the British Frozen Food Federation warning the changes could result in major delays at ports.

At the same time as this is going on, companies are also dealing with persistent problems in the logistics sector, especially the shortage of HGV drivers.

What does this look like in practice? Well, the privilege of wasting an afternoon of your special life on this wonderful planet assembling a bookcase just got a bit more expensive.

Ikea has confirmed it has had to hike prices, with the cost of some furniture up by 50%.

Meanwhile, in a move seemingly designed to delight the DAMN THOSE MEDDLING BRUSSELS BUREAUCRATS crowd, the EU is set to ban colour ink in tattoos over safety concerns.

So, we may see empty shelves again in the New Year, but our Union Flag tattoos will be brighter and bolder than ever.

TL;DR: Bored of Covid? Have a bit of Brexit.

And finally…A nice day out in London

We imagine you may well have one of those hangovers that are so devastating you don’t quite know what to compare it to.

Being hit by a bus? Dragged through a hedge backwards? Sometimes, the go-to descriptions don’t quite cut it.

How about this for your New Year special: Feeling three feet tall and like you’ve been nailed in the face by a marching guardsman with hell behind the eyes and carrying a rifle.

Sound familiar? A hangover you need to make way for.

One unlucky sightseer was treated to an object lesson in what feels like to be an adult on New Year’s Day this week.

They were minding their own business when they were marched into the ground by a guard clearly unwilling to stop for no one – man, woman or child.

Luckily, the young’un was entirely unharmed and bounced right back up like they do at that age.

Good luck to those of you praying your own bounce arrives sooner rather than later.

TL;DR: Thoughts and prayers with the ‘toilet bowl day’ crowd.