Protestors gathered in capital to demonstrate against the continued coronavirus lockdown conditions and the Government’s controversial Police, Crime, Sentencing, and Courts Bill. The Metropolitan Police have so far confirmed 13 people have been arrested, mostly for breaching Covid regulations. The force tweeted: “Our officers are continuing to engage with people attending the ongoing protests in Central London.

“Those gathering in crowds are being encouraged to disperse and go home.

“This could be a fixed penalty notice, or arrest.”

The main protests have been connected to the coronavirus lockdown restrictions, with groups demonstrating against limitations on movement and activity imposed by governments. 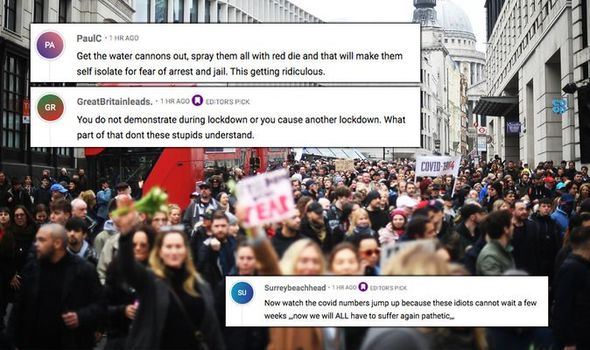 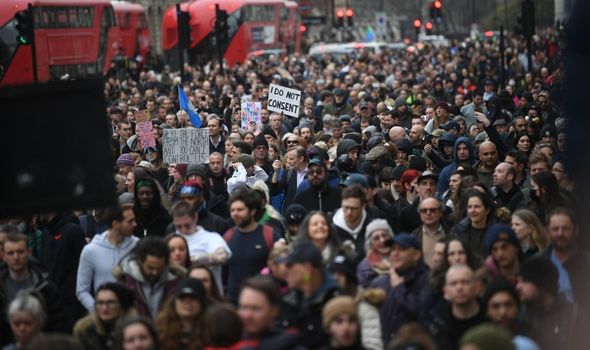 But Britons have lashed out at the protesters, warning their actions could trigger another lockdown – just as the country is being eased away from current measures.

In response to our earlier story on the protests, one Express.co.uk reader raged: “You do not demonstrate during lockdown or you cause another lockdown.

“What part of that don’t these stupids understand?”

Another person commented: “Get the water cannons out and spray them all with red dye. 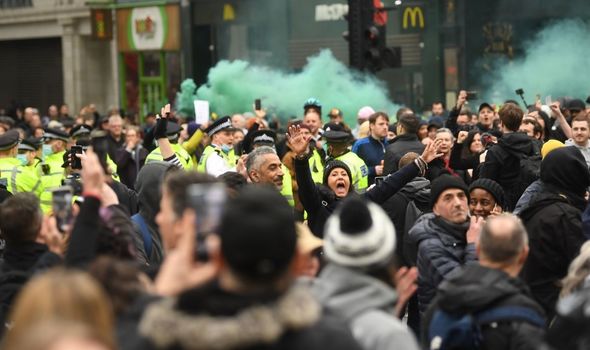 “That will make them self-isolate for fear of arrest and jail. This is getting ridiculous!”

A third person wrote: “Now watch the Covid numbers jump up because these idiots cannot wait a few weeks.

“Now we will ALL have to suffer again! Pathetic!”

The protesters began to march towards Central London at around 1pm, with many carrying a banner stating: “Protect our freedom, save our children’s lives”. 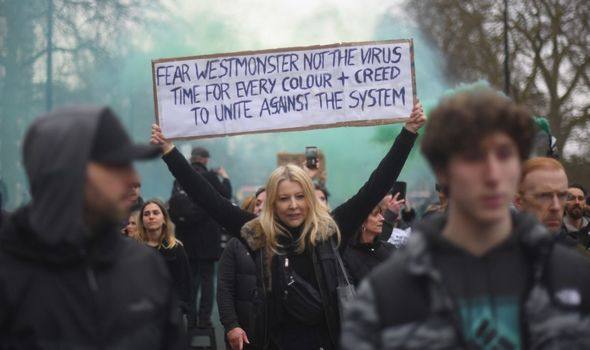 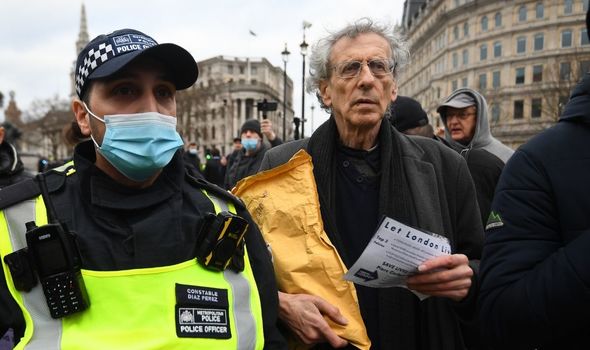 Police lined the route taken by the protestors, who then marched towards nearby Parliament Square.

The demonstrations are set to take place across major urban centres throughout Europe, with Central London one of the main planned events.

Prior to the protests, the Metropolitan Police Events account tweeted: “We’re aware groups are planning to travel into London today to protest.

“Our city remains in a health crisis, gatherings risk spreading the virus and are unlawful.

“We have a policing plan in place throughout the day.

The police force later followed this with the tweet: “Met officers are engaging with those gathering around Piccadilly and other areas of central London to protest, explaining that we remain in a public health crisis and urging people to disperse or go home.”

On Friday, the Met had announced on Twitter that it was “aware of several groups intending on gathering in and around central London on Saturday, 20 March, for the purpose of protest”.

Met Police Deputy Assistant Commissioner Laurence Taylor had also said: “The Met is committed to working with groups who wish to assemble to protest or for other purposes.

“But these are not normal times. Within the last few weeks, London has seen high infection rates with many people in hospital because of coronavirus.

“Given the very real threat to public health, it is vital we all take action to avoid situations where the virus can easily spread.”